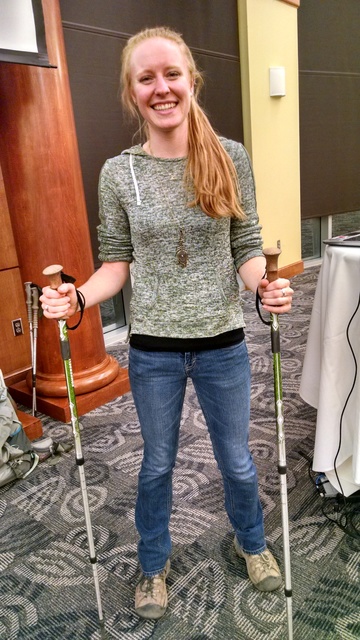 Connor Timpone stands in the Dickson Auditorium at LaGrange College on Oct. 20, where she spoke to students and members of the Sierra Club about her experience hiking the Appalachian Trail at 18 years old.

http://lagrangenews.com/wp-content/uploads/sites/37/2015/10/web1_WEB1030Timpone.jpgConnor Timpone stands in the Dickson Auditorium at LaGrange College on Oct. 20, where she spoke to students and members of the Sierra Club about her experience hiking the Appalachian Trail at 18 years old.

LaGRANGE — Connor Timpone traveled 2,179 miles through forests and wild lands when she was 18 years old, and she has a story to tell.

After graduating high school, Timpone and her friend set out for Maine to begin their adventure of hiking the Appalachian Trail. They forded a river and slogged through deep mud before starting.

The two were joined by other hikers and all took trail names. Timpone was Flora and her friend Fuana, with others sporting names like Mother Goose, Skittles, Cloud and Yo Yo.

Timpone and her friend averaged 17 per day. They stopped at shelters about 15 miles apart. There also were pack centers were areas where hikers had to pay a fee to stop and could use basic amenities.

They would take some days off hiking, called a “zero day,” and they also would need to sometimes stop and take shelter from the elements. They sometimes shared their space with “shelter” mice.

Timpone noted that sometimes food and beverages — like bananas, beer and pop tarts — would appear on the trail. She called it “trail magic.”

The travelers would venture off the trail every four to five days to shower, buy food and do laundry. They had to be conservative with their money.

“Trail angels” who lived close to trail areas would invite hikers in for showers and dinners, or directions. They also detoured to camp in Central Park when they reached New York City.

During their New York City stop, Timpone’s friend decided to stay with her boyfriend and his friend, who lived in the city. Timpone faced the rest of her journey alone, but skipped about 100 miles of the trail. She kept in touch with her parents to help her meet the challenge.

Hikers would also often help each other, forming “trail families” that would help get through tight rock formations, guide through heavy snow that covered the trail and gather wood to make fires.

As she approached Springer Mountain near Amicalola Falls, Georgia, Timpone met with her father to hike the last leg of the trail with her. Her father, also an avid backpacker, returned to New York to hike the 100 miles with her that she lost on her stop in New York City.

Timpone plans next to hike the Pacific Trail, a 2,663-mile trail through California, Oregon and Washington.

Once or twice a year the LaGrange Sierra Club group partners with LaGrange College to bring programs to the college campus. Students receive required cultural enrichment credits when attending the programs as well as exposure to the Sierra Club, the largest and oldest environmental organization in the U.S.