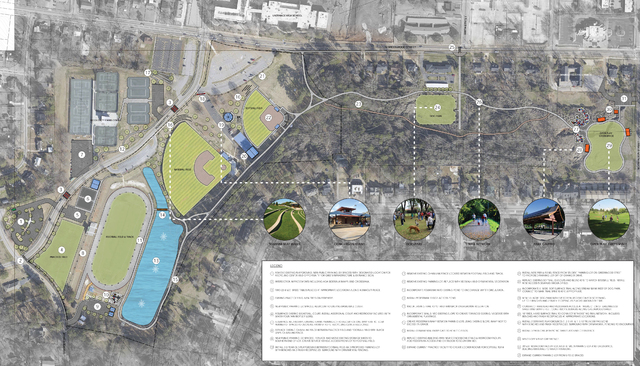 Brittany Wynne of the Flower Streets neighborhood pushes her son, 2-year-old Patrick, Wednesday on a swing at Granger Park. The city is planning an expansion of the park, which could include improvements to parking and facilities.

http://lagrangenews.com/wp-content/uploads/sites/37/2015/10/web1_Park.jpgBrittany Wynne of the Flower Streets neighborhood pushes her son, 2-year-old Patrick, Wednesday on a swing at Granger Park. The city is planning an expansion of the park, which could include improvements to parking and facilities. The proposed expansion of Granger Park is shown in an artist’s rendering. Changes have already been made and some aspects of the map have changed, but it outlines what the city may do in the coming years to revitalize and revamp the park.

http://lagrangenews.com/wp-content/uploads/sites/37/2015/10/web1_GrangerParkMasterPlan.jpgThe proposed expansion of Granger Park is shown in an artist’s rendering. Changes have already been made and some aspects of the map have changed, but it outlines what the city may do in the coming years to revitalize and revamp the park.

LaGRANGE — When Casey Varner moved onto a dead-end street across from the playground at Granger Park last year, he was excited.

“We love the community, we love the playground, we love being here across from the playground because we enjoy it,” he said Wednesday as he did yard work outside his home with his 5-year-old son. “Who doesn’t want to live within walking distance from a playground?”

That’s why when he learned the city was planning to pave over his personal paradise and put in a parking lot, he was a little concerned, to put it lightly.

“If they put in a parking lot, then it would look a lot like the Granger parking lot currently does, with trash and litter,” he said. “We definitely don’t want that across from our house where we’re raising a 5-year-old son.”

The city ultimately shelved the proposal after a meeting with residents of the Flower Streets neighborhood, but that doesn’t mean the entire Granger Park Master Plan is off the table. It’s part of an estimated $1.7 million project, according to the city’s comprehensive plan, to revitalize and expand what Mayor Jim Thornton once called the “crown jewel” of the LaGrange park system — but it doesn’t end there.

At a joint meeting of the City Council and Parks and Recreation board Tuesday morning, the stakeholders called for the creation of a committee to look at creating a citywide — maybe even countywide — parks plan. It’s an initiative called for by the city’s 20-year comprehensive plan that was approved Tuesday evening by City Council.

Leigh Threadgill, city planner, said the Granger Park proposal hasn’t come without criticism, but she’s working with the neighborhood to create a master plan that works for everyone.

“I’ve been in the hot seat plenty,” she told the joint meeting. “Planners are no stranger to controversy. This plan was developed with the help of a small steering committee of stakeholders that are adjacent homeowners or members of this community, and we worked together for months and developed this master plan for Granger Park.”

The Granger Park Master Plan is comprehensive. It calls for increased parking, concession facilities, amphitheater-style seating for the baseball fields, walking trails, a dog park and revamped playground equipment, among other suggestions. The question becomes not only how to pay for all of the expansion, but to maintain it.

Under Georgia law, parks are maintained by county government. Troup County this year approved a budget of less than $40 million while the city plans to spend $110 million. The already cash-strapped county would have to take over the expansions to the park and would be responsible for its upkeep. Both the city and the parks and rec board know that would be a challenge.

At the Granger Park playground Wednesday, Brittany Wynne, who lives nearby in the Flower Streets neighborhood, said she’s curious about the proposal, even a little skeptical.

“I don’t know,” she said. “If they’re considering it, I guess there are funds. I see them maintaining trash cans and stuff, but I don’t see them replacing equipment.”

Wynne would like to see the city take care of what it already has instead of expanding into new territory.

“I think (the plan) is very interesting, but look at what we already have,” she said as she pushed her 2-year-old son Patrick on a swing. “I wish they would just maximize what we have instead of just throwing money at something new.”

At the playground there are only four functioning swings and the covered patio is defaced with gang graffiti and profanity. Sitting in that patio not far from Wynne, a barefoot 10 year old named Trevor said he’d like to see the city step up and at least paint the patio to cover the graffiti.

“I think they should clean the graffiti because of the curse words happening here,” he said. “It kind of gets the kids into saying curse words.

“Look up there,” he said, pointing to the ceiling at the crudely scrawled profanity. “They got a lot of cursing. But I don’t pay no attention. I think it would be a lot more brain-expanding for there to be a type of law that gives more consequences for graffiti.”

It might not be jail time that motivates people to keep the parks clean, though. The city’s 20-year comprehensive plan calls for communities to create “Friends of the Park” clubs that would help shoulder the burden of the park maintenance and foster a sense of ownership.

That may work if a city survey conducted in February and March is correct. Of 873 respondents, 567 people said parks and community facilities needed some or a lot of attention, according to the comprehensive plan.

As for the next stage of the proposed Granger Park expansion, Threadgill said she has a meeting mid-December to find out if the city will be awarded a grant to create a trail that will run from the open space on Haralson Street behind Saint Mark’s Episcopal Church on North Greenwood Street over to the existing Granger Park.

It’s a $100,000 grant that would be administered through the Georgia Department of Natural Resources for the trail’s creation. If the city wins the grant, the money would have to be spent within two years, Threadgill said. So, changes could come by 2018.

As for the rest of the park plan, Threadgill said it’s still in its planning phase. Likewise, the creation of the committee to explore a city or countywide park plan is still in its infancy.