Plenty on the line as regular season winds down 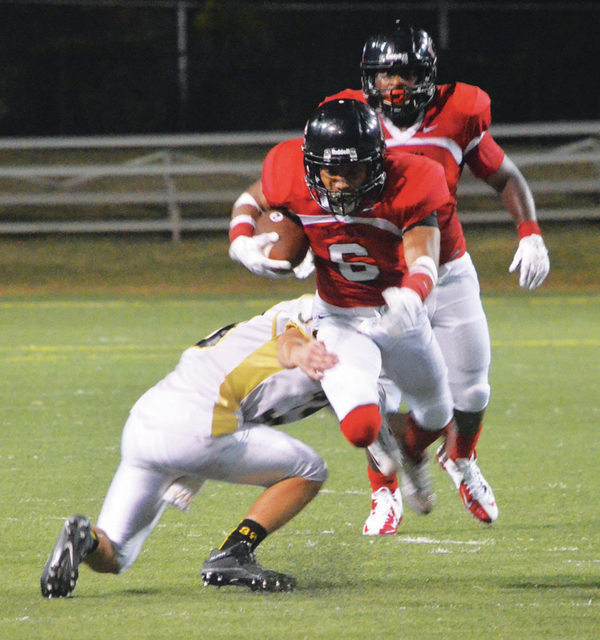 Troup quarterback Dexter Shealey takes a snap during the first half of last week’s game against Carrollton. The Tigers are 0-3 in Region 5-AAAA, but they’re still in the playoff race. Kevin Eckleberry | Daily News

http://lagrangenews.com/wp-content/uploads/sites/37/2015/10/web1_10-29-troup1.jpgTroup quarterback Dexter Shealey takes a snap during the first half of last week’s game against Carrollton. The Tigers are 0-3 in Region 5-AAAA, but they’re still in the playoff race. Kevin Eckleberry | Daily News LAGRANGE – They’re in the driver’s seat.

Thanks to last week’s big 35-28 win over the Shaw Raiders, the LaGrange Grangers head into the final two weeks of the regular season knowing if they beat Harris County and Northside, they will be in the state playoffs.

While Carver and Northside are sitting atop the Region 1-AAAAA standings with 4-0 records, LaGrange is alone in third place at 2-2.

Shaw and Columbus are both 2-3 in the region, while Harris County is 1-3.

Only Hardaway, at 0-4 in the region, has been eliminated from contention for one of the region’s four playoff spots.

Carver and Northside have already sewn up playoff spots, and on Friday night, they will play for the region championship.

While Carver won’t finish any lower than second in the region, Northside could finish third if it drops its final two games.

If LaGrange wins out, it would finish no lower than third in the region, and it could move up to second, depending on what happens with Northside.

If the Grangers split their final two games, they could end up in a tie for fourth, so it would come down to the tie-breakers.

The Troup Tigers, despite their winless record, are in a similar position to the Grangers.

If the Tigers win their final two regular-season games against Fayette County and Whitewater, they will be in the playoffs as Region 5-AAAA’s fourth seed.

If the Tigers don’t win out, their season will end following the regular-season finale against Whitewater.

Woodward Academy and Carrollton are sitting atop the region with 3-0 records, while Sandy Creek is 2-1 following last week’s loss to Woodward.

Fayette County is 1-2 in the region, and Troup and Whitewater are both 0-3.

In a matchup of state-ranked teams, Woodward Academy overwhelmed Sandy Creek 37-7 last week to improve to 8-0 overall and take command of the region race.

While Carrollton is unbeaten in the region, its wins came against the three teams at the bottom half of the standings.

In Region 5-AAA, it’s all about Callaway and Central-Carroll.

They figured to be the teams to beat in the region coming into the season, and that’s the way it has played out.

Both teams are unbeaten in the region at 3-0, and they will meet at Central-Carroll next week for the region championship.

A year ago, it was Central beating Callaway 40-34 on the final day of the regular season to clinch the region title.

Central-Carroll did have an unexpected close call against Cedartown last week.

Cedartown, which only has one victory all season, pushed Central to the limit before losing 27-22.

Callaway beat Cedartown 43-17 in a game that was never competitive.

There is a three-way race for the region’s final two spots in the state playoffs.

Pepperell, Rockmart and Cedartown all have 1-2 region records, and they’ll fight it out the next two weeks.

Here are the region standings, with overall record first followed by region records.