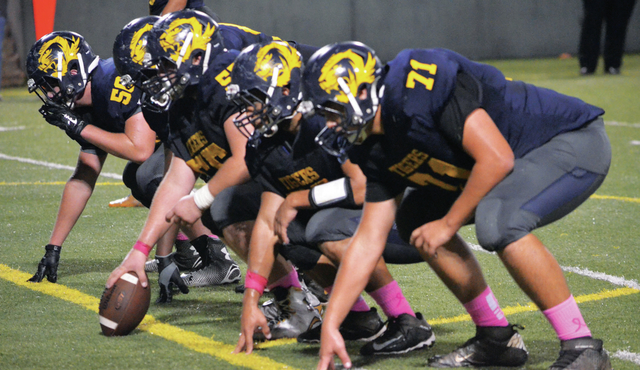 Troup head coach Tanner Glisson encourages his players during last week’s game against Carrollton. Troup will be on the road against Fayette County on Friday. Kevin Eckleberry | Daily News

http://lagrangenews.com/wp-content/uploads/sites/37/2015/10/web1_10-29-troup6.jpgTroup head coach Tanner Glisson encourages his players during last week’s game against Carrollton. Troup will be on the road against Fayette County on Friday. Kevin Eckleberry | Daily News Troup’s Tay Moreland, Eli Patrick and Hudson get ready for the snap during last week’s game against Carrollton. Troup’s defense has continued to improve this season, and the unit will try to slow down Fayette County tonight. Kevin Eckleberry | Daily News

http://lagrangenews.com/wp-content/uploads/sites/37/2015/10/web1_10-29-troup-defense.jpgTroup’s Tay Moreland, Eli Patrick and Hudson get ready for the snap during last week’s game against Carrollton. Troup’s defense has continued to improve this season, and the unit will try to slow down Fayette County tonight. Kevin Eckleberry | Daily News Troup’s offensive linemen get ready to go before a play last week against Carrollton. An offensive line that has undergone significant changes during the season has performed well. Kevin Eckleberry | Daily News

http://lagrangenews.com/wp-content/uploads/sites/37/2015/10/web1_10-29-troup-oline.jpgTroup’s offensive linemen get ready to go before a play last week against Carrollton. An offensive line that has undergone significant changes during the season has performed well. Kevin Eckleberry | Daily News

The struggles the Troup Tigers have endured this season have been well-documented.

As the Tigers hit the road for Friday’s game against Fayette County, they are still looking for their first win.

The effort has been there each week, and while the outcomes may not reflect it, the coaches believe the team has improved as the season has gone along.

That elusive win hasn’t come, though.

The Tigers are hoping that changes this week.

After a brutal five-game stretch against Carver, Callaway, Woodward Academy, Sandy Creek and Carrollton, Troup will play a 2-6 Fayette County team on Friday.

If Troup wins that game, and then beats Whitewater next week, it will be one of Region 5-AAAA’s four playoff teams.

For the players who have endured so much, from coaching changes to all of the losses, that is a worthy goal to shoot for.

“We can still get to the playoffs,” said senior offensive lineman Hudson Newton. “That’s what we’re thinking about right now.”

It has been a trying year for the Tigers.

Shawn Sutton was hired as Troup’s head coach in February to replace Lynn Kendall, but after less than two months on the job, he resigned, and the search began anew.

In late May, Tanner Glisson was hired, and he became Troup’s third head coach in six months.

Because of Glisson’s late arrival, the Tigers were unable to hold spring practice, and the new coaching staff didn’t even see the players in pads until August, a few weeks before the first preseason game.

Add to that a heavy roster turnover from the previous season, particularly on the defensive side of the football and on the offensive line, and the Tigers figured to be in for some hard times.

It didn’t help that Troup was facing a schedule that has turned out be every bit as arduous as expected.

One of the team’s veterans, senior running back Mess Bonner, knew the team had a lot to overcome.

It has been a work in progress this season.

Offensive and defensive schemes have been adjusted, and players have been shifted around to get them in the spots where they can best contribute.

Again, while a win has eluded the Tigers, the players and coaches feel progress has been made.

“Every game, every week, we’re getting just a little bit better,” senior wide receiver Tremayne Tolbert said. “It’s a work in progress, and we’ve just been trying to work hard every day, and every practice.”

Of course that doesn’t lessen the frustration of losing week after week.

No one is happy about being 0-8, but Tolbert said he is proud of how he and his teammates have competed against a loaded schedule.

“We’ve had some hard teams to go against,” Tolbert said. “We’ve just tried our best, and we keep grinding.”

Bonner said the bond the players have with each other is tighter than ever, and that they don’t let anything that happens outside of the Troup football family affect them.

“We’re just trying to stay positive,” Bonner said. “We don’t worry about any of the negativity. They’re my brothers.”

One of the team’s seniors, defensive lineman Orion Zeigler, said he and the other upperclassmen have made sure to set a positive example for the younger players.

“We know they’re going to look at us, so we try to keep them up,” Zeigler said.

Offensive coordinator Kelby Holt, who was brought board after Glisson was hired, said it has “been a learning process” for the past four months or so, beginning with the summer workout program, and continuing through preseason practice and the first eight games of the season.

“You hate to go back and harp on that we didn’t have a spring and all that kind of stuff, but when you put pads on, it’s a different level,” Holt said.

Holt said the teaching never stops, and that the coaches continue to fine-tune things each week.

On offense, one of the big changes involved moving Dexter Shealey to quarterback early in the season, and the senior has done well in that role.

With the explosive Bonner and Camren Russell running the ball, and Tolbert and fellow senior Travis Johnson making big catches, the Tigers have had no problems moving the ball, although some red-zone issues have kept them from putting up a lot of points.

The Tigers figured to have their struggles defensively with only two starters returning from a year ago, and that has been the case.

In their eight games, the Tigers have given up an average of 45 points.

There have been positive signs on that side of the ball, though.

The Tigers are doing a much better job tackling, and they’re not giving up the home-run plays that they were earlier in the season.

“Our defense has gotten dramatically better the last couple of weeks,” Holt said. “Scheme wise they’ve changed what they’re doing, and it fits our personnel.”

Holt said he is happy that, with everything that has gone wrong, the players have something to play for in the final two weeks of the season.

“To be in the situation we are in right now, these kids are hungry,” Holt said. “They want to win. Most teams in our situation, they’re just playing it out. We’ve got a chance to be in the playoffs.”