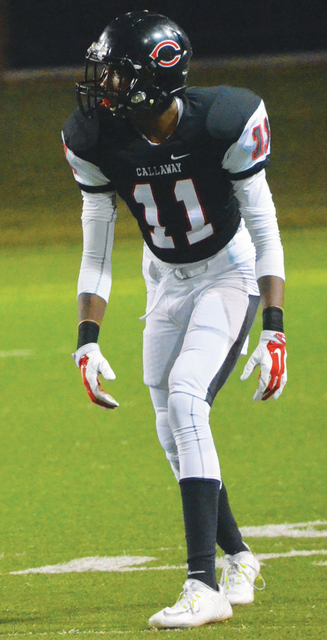 Callaway’s Brandon Boddie goes over the top for a 5-yard touchdown run in the first half of Thursday’s 40-7 victory over Haralson County. Kevin Eckleberry | Daily News

http://lagrangenews.com/wp-content/uploads/sites/37/2015/10/web1_10-30-CHS1.jpgCallaway’s Brandon Boddie goes over the top for a 5-yard touchdown run in the first half of Thursday’s 40-7 victory over Haralson County. Kevin Eckleberry | Daily News Callaway’s Dylan Johnson gets a pass away during the first half. Johnson threw a touchdown pass to Joe Brown. Kevin Eckleberry | Daily News

http://lagrangenews.com/wp-content/uploads/sites/37/2015/10/web1_10-30-CHS23.jpgCallaway’s Dylan Johnson gets a pass away during the first half. Johnson threw a touchdown pass to Joe Brown. Kevin Eckleberry | Daily News Callaway’s Michael Freeman runs for daylight after making a catch in the first half. Kevin Eckleberry | Daily News

http://lagrangenews.com/wp-content/uploads/sites/37/2015/10/web1_10-30-CHS26.jpgCallaway’s Michael Freeman runs for daylight after making a catch in the first half. Kevin Eckleberry | Daily News LAGRANGE – It’s time for the rematch.

On the final day of the regular season a year ago, it was Central-Carroll beating Callaway 40-34 in a thrilling game that decided the Region 5-AAA championship.

Next week, those same two teams will square off again, and just like a year ago, the region title will be on the line.

Callaway tuned up for that big game by enjoying a stress-free evening against Haralson County on Thursday at Callaway Stadium.

It didn’t figure to be a competitive game, and it wasn’t.

Callaway scored touchdowns six of the first seven times it touched the ball to build a 40-0 lead, and it went on to claim a 40-7 victory.

Most of Callaway’s starters were resting on the sideline in the second half, which went quickly because of a running clock.

The Cavaliers (8-1), who have won eight consecutive games since a season-opening loss to LaGrange, will bring a 4-0 region record into next week’s game.

Central-Carroll (8-0, 3-0) will play Rockmart today before turning all of its attention to next week’s showdown, which will be played in Carrollton.

Callaway head coach Pete Wiggins is pleased with the way his team has improved since that loss to LaGrange to kick off the season.

“We’ve gotten better each week,” Wiggins said. “They come to work every day. They’ve got a good attitude. We’ve just to keep it going.”

Haralson County’s offense didn’t produce a first down in the opening two quarters, and its defense was unable to slow down Callaway’s quick-strike attack.

Cedric Maynard added three more touchdowns to his tally, giving him 21 for the season.

Tyrek Frazier added a 20-yard touchdown run for the Cavaliers, and fullback Brandon Boddie got into the act with a 5-yard scoring run.

Callaway’s first score came through the air, with Dylan Johnson connecting with Joe Brown for a 21-yard touchdown.

Trailing 40-0, Haralson County got its lone touchdown on a 3-yard scoring run by Hunter Finley in the fourth quarter.

As important as next week’s game is, Callaway linebacker Jibrell Jackson said the players made sure to give 100 percent effort against Haralson County.

“We focus on one game every week, because every game is important,” Jackson said. “It’s important to play hard every game.”

It was apparent early on that the Cavaliers weren’t going to have much trouble dispatching the Rebels.

On the game’s first play from scrimmage, Maynard ripped off a 25-yard run, and he added a 10-yard run two plays later, and just like that the Cavaliers were on the 21-yard line.

On first down, Brown found himself alone in the end zone without a defender anywhere close to him, and Johnson dropped the ball into his arms for the touchdown.

Noah Stephens made the first of his four extra-point attempts, and Callaway led 7-0 barely a minute into the game.

Haralson then had the first of its six three-and-outs in the first half, and moments later, Maynard delivered a 37-yard touchdown run, and Callaway was up 14-0 with 7:54 left in the first quarter.

Callaway was knocked back 10 yards by a holding penalty on its next possession, but it didn’t matter.

On first-and-20, Johnson completed a 26-yard pass to Dre Martin to the Haralson County 30-yard line.

On the next play, Maynard struck again for a 30-yard scoring run, and in a game that was only seven minutes old, Callaway led 21-0.

On their next possession, the Cavaliers were stopped on third down, and they lined up for a 36-yard field-goal attempt.

The kick was blocked, and Haralson County’s Grant Hurston picked up the ball, and it looked like he might score a touchdown.

Johnson, who was the holder on the attempt, hustled down the field and caught Hurston and brought him down at the 15-yard line.

“Regardless of where he’s at, he’s giving it all he’s got,” Wiggins said of Johnson. “And we’ve got a lot of guys like that on this team.”

On a first-down play, JT Wortham made a tackle in the backfield for a 7-yard loss, and on the next play, Travis Traylor had an interception, and the Cavaliers had the ball back.

It took them two plays to pad their lead.

After Johnson completed a 10-yard pass to Boddie, Maynard went 68 yards for for his third touchdown.

The offensive linemen gave Maynard a big hole to run through, and he made it to the end zone without being touched.

The Cavaliers got the ball near midfield on their next possession, and it took them five plays to score again.

The big play on the drive was a long pass play from Johnson to tight end Michael Freeman.

Freeman took the short pass and nearly scored, but he was brought down at the 5-yard line for a 46-yard completion.

On the next play, Boddie got his chance.

Boddie, a fullback, is primarily a blocker, but he has been effective when he has had the ball in his hands.

Boddie took a handoff from Johnson, and as he approached the goal line, he went airborne, and he landed in the end zone for the 5-yard scoring run.

“I just saw people on the ground, so I thought, I’ve got to jump,” Boddie said.

With 5:20 left in the half and leading 33-0, the Cavaliers got the ball again at midfield, and they covered the 50 yards in five plays.

Johnson, showing off his running ability, got loose for a 30-yard run on second down to the 20.

Two plays later, Frazier scored from 20 yards out, and with the Stephens extra point, Callaway led 40-0, and that was the score at the half.

The second half belonged to the reserves, and there were some bright spots for Callaway.

Sophomore quarterback Kedrick Ramsey led a nice drive that began at the Callaway 33-yard line and ended at the 6-yard line with a kneel-down play as time expired.

Ramsey had a 45-yard run to get the ball deep into Haralson County territory on that drive.

Haralson County had a 11-play, 88-yard scoring drive that ended with a Finley 3-yard touchdown run.