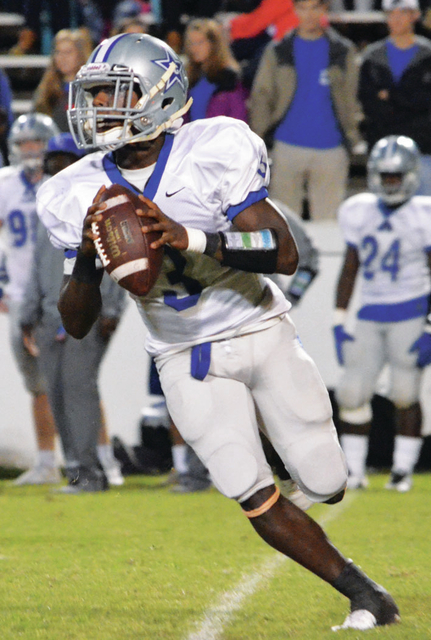 LAGRANGE – There are all sorts of playoff scenarios in Region 1-AAAAA.

With two regular-season games remaining, six teams still have a chance to earn one of the region’s four playoff spots, and one of those teams is LaGrange High.

Some of those teams need help making it to the playoffs, but the Grangers aren’t one of them.

Thanks to last week’s dramatic 35-28 win over Shaw, the Grangers control their own playoff fate.

If LaGrange beats Harris County tonight and Northside next week, it will be in the state playoffs.

The Grangers could also make it to the playoffs if they lose one of their next two games, but there’s not a guarantee of that happening.

If the Grangers keep winning, they won’t have any worries.

First up is a Harris County team that won a region title a year ago, but has struggled this season.

A year ago when these two teams played, Harris County had a quarterback in TaQuon Marshall and a running back in Tae Crowder who were both being heavily recruited by colleges across the country.

Marshall and Crowder are now gone, playing for Georgia Tech and Georgia respectively, and the Tigers have had a hard time getting anything going.

Harris County (2-6 overall) is 1-3 in the region, and it has to win the next two games to keep its slim hopes of making the playoffs alive.

LaGrange (4-4 overall) is 2-2 in the region and sitting in third place behind Carver and Northside.

After back-to-back region losses to Columbus and Carver, LaGrange headed to Shaw last week in desperate need of a win.

The Grangers made it happen, but it wasn’t easy.

Twice in the game LaGrange had a 14-point lead, but both times Shaw rallied to pull even.

LaGrange took the lead for the final time when running back Kimani Barnes caught a short pass from LaPerion Perry and turned it into a 57-yard touchdown.

Shaw made it to the LaGrange 2-yard line in the closing moments, but Johnathan Olajubutu sacked Shaw quarterback B.J. Knight to end the game.

It was another monster night for LaGrange’s offense, which has 12 touchdowns in the past two games.

Perry, LaGrange’s dynamic junior quarterback, has accounted for a bunch of those touchdowns.

In a wild 51-50 loss to Carver, Perry had two long touchdown runs, and he also threw a pair of scoring passes.

In the Shaw game, Perry had four more touchdown passes.

In the first half, Perry hooked up with senior Andrew Askew on scoring passes of 16 and 81 yards, and he also threw a 52-yard touchdown pass to Mike Hardy.

After Barnes scored on a 30-yard scoring run to give LaGrange a 28-14 lead, Shaw rallied to tie it.

In a 28-28 game, LaGrange was facing a third-and-long situation from its own 43 when Barnes scored the winning touchdown.

The Grangers gave up a bunch of yards and four touchdowns, but when they needed to make a play, they did.

Shaw had two attempts from the 2-yard line in the closing moments, but it couldn’t score.

After Mike Hardy made a pass breakup in the end zone, Olajubutu came through with the sack to end it.

If LaGrange wins tonight and Northside loses, those two teams would play for the region’s second seed next week.

Northside and Carver, who are both 4-0 in the region, will play for the region championship tonight.

If Northside beats Carver tonight, the best LaGrange can do is finish third in the region.