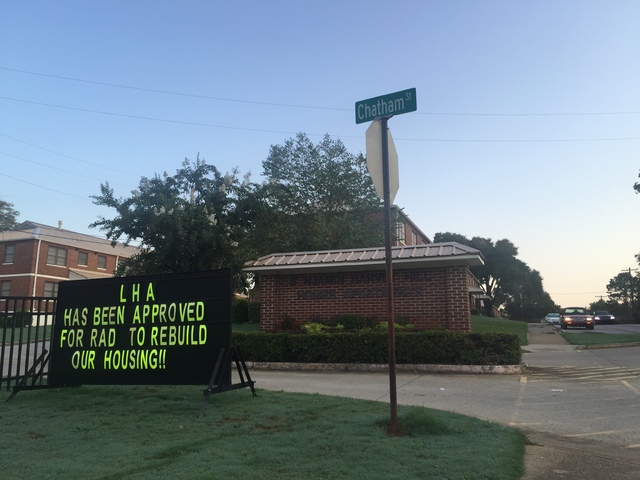 The Benjamin Harvey Hill Homes on Whitesville Road, pictured, along with the Lucy Morgan Homes on Borton Street are slated to be replaced under a program that allows for private investment. The plans are in line with a recently approved 20-year Comprehensive Plan by LaGrange officials with a goal to provide more affordable, quality housing.

http://lagrangenews.com/wp-content/uploads/sites/37/2015/10/web1_WEB0824Housing.jpgThe Benjamin Harvey Hill Homes on Whitesville Road, pictured, along with the Lucy Morgan Homes on Borton Street are slated to be replaced under a program that allows for private investment. The plans are in line with a recently approved 20-year Comprehensive Plan by LaGrange officials with a goal to provide more affordable, quality housing.

LaGRANGE — There is a lack of affordable, quality housing in LaGrange, according to the city’s recently approved 20-year Comprehensive Plan.

The plan calls for expanding local programs to provide opportunities for low-income residents, addressing blighted neighborhoods and increasing the mix of housing types, sizes and price ranges throughout the city.

Zsa Zsa Heard, executive director of the LaGrange Housing Authority, served on the committee that oversaw the creation of the Comprehensive Plan and said she hopes to partner with the city to develop outside-the-box ideas to solve the problem.

Earlier this year, the federal Department of Housing and Urban Development approved the authority for participation in the Rental Assistance Demonstration program.

RAD shifts housing units from the public housing program to the federal Section 8 program and authorizes government payments to private landlords. Providers like the housing authority may leverage the private sector to make capital improvements, according to HUD.

It’s complicated, Heard said, but what the RAD conversion basically means the housing authority can act more like a free-market property manager and could have more flexibility in how it provides housing to low-income residents. Earlier this year, the authority announced plans to tear down the familiar brick apartments at the Lucy Morgan and Benjamin Hill apartment complexes on Revis Street and Whitesville Road, respectively.

For example, with the RAD conversion, it would be possible for the housing authority to purchase blighted homes in dilapidated neighborhoods in LaGrange, fix them up and rent them to low-income people, Heard explained. In another scenario, the housing authority could buy land and build apartment-style homes elsewhere in the city. The funds to do either of those projects could come from public money or private investment, she said.

Either way, Heard said she needs the city’s support to move forward with her vision for affordable housing in LaGrange. She also wants to concentrate low-income residents from centralized housing complexes like the ones on Whitesville Road and Revis Street. A move like that not be politically popular, she said, but the housing authority and the city are required by the federal Fair Housing Act of 1968 to provide equitable housing options for all types of people.

“The children here have to see different children, or they are never going to change,” she said. “They might not ever hear about going to college or becoming a doctor. But if we blend them in with other types of kids who maybe play the violin or play a different kind of sport, it introduces them to a new environment.”

There is grant money available for projects like the ones Heard is considering, according to Alton West, the city’s director of community development.

Two grants flow from the federal government through the state’s Department of Community Affairs: the Community Housing Improvement Program and the Community Development Block Grant.

In the past, the city has funneled the CHIP grants to the affordable housing nonprofit DASH and the most recent CDB grant went toward upgrading city water infrastructure, West said. The city has to compete for the grants and the funding is merit based.

“(The Department of Community Affairs) really likes shovel-ready projects,” West said. “They like to see that you have a plan and that you’re ready to act on it.”

Heard said she plans to come up with such a plan and in the future hopefully apply for some of that grant money.