Troup’s Bonner is a play-maker 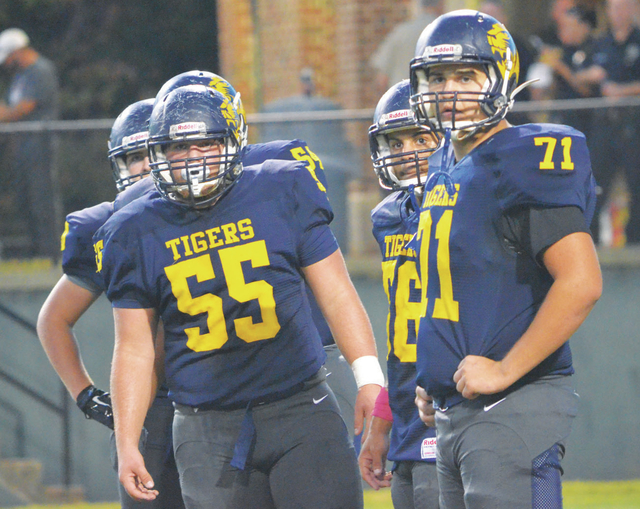 Troup’s Mess Bonner scores a touchdown against Callaway during a game this season. Bonner has had a big senior season at running back. Kevin Eckleberry | Daily News

http://lagrangenews.com/wp-content/uploads/sites/37/2015/10/web1_10-30-troup4.jpgTroup’s Mess Bonner scores a touchdown against Callaway during a game this season. Bonner has had a big senior season at running back. Kevin Eckleberry | Daily News Running back Camren Russell takes a handoff from quarterback Dexter Shealey during a game this season. Kevin Eckleberry | Daily News

http://lagrangenews.com/wp-content/uploads/sites/37/2015/10/web1_10-30-troup2.jpgRunning back Camren Russell takes a handoff from quarterback Dexter Shealey during a game this season. Kevin Eckleberry | Daily News Offensive linemen Mark Seymour and Hudson Newton look to the sideline during a game this season. Kevin Eckleberry | Daily News

http://lagrangenews.com/wp-content/uploads/sites/37/2015/10/web1_10-30-troup1.jpgOffensive linemen Mark Seymour and Hudson Newton look to the sideline during a game this season. Kevin Eckleberry | Daily News

When Troup running back Mess Bonner gets his hands on the football, there’s always a possibility he’ll be celebrating with his teammates in the end zone moments later.

Over the past two seasons, Bonner has scored a bunch of touchdowns, and many of them have come from long range.

In last week’s game against Carrollton, Bonner scored both of his team’s touchdowns, one on a 65-yard scoring catch, and the other on a 40-yard touchdown run.

While the season has been a struggle for the Tigers, who head into today’s game at Fayette County with an 0-8 record, they have had their share of success on offense.

Bonner is a big reason why.

He is the most explosive player on the Troup team, and when he gets in the open field, he has rarely been caught.

He has shown that repeatedly.

Against Sandy Creek, Bonner had a 90-yard touchdown run late in the game.

In the Callaway game, Bonner scored two touchdowns, with one coming on a 69-yard scoring pass from Dexter Shealey.

He also had a 40-yard touchdown run against Carver, as well as a 30-yard catch that set up another score.

He also scored touchdowns against LaGrange, Northgate, and he has been a dual threat making plays running the ball, and catching it.

Bonner has also been playing a lot on defense, making him one of the busiest players on the team.

“I don’t get tired until I score, until I get to the sidelines,” Bonner said with a grin.

Troup offensive coordinator Kelby Holt is glad to have Bonner on the field.

“Mess, you get him past the first level, and it’s on then,” Holt said. “When he turns it on, he’s got another gear. When he sees green grass, he turns it on.”

While Bonner has had his share of individual success, he’d trade all the stats and touchdowns for some wins.

For a senior playing his final season of high-school football, it has been a disappointing season, but Bonner hasn’t hung his head.

“We’re just trying to stay positive,” Bonner said. “We don’t worry about any of the negativity.”

Troup still has a chance to make the state playoffs if it beats Fayette County tonight and Whitewater next week.

Bonner is part of an offense with a plethora of play-makers.

Junior Camren Russell teams with Bonner to give Troup a potent one-two combination at running back.

Senior Tremayne Tolbert has been the team’s top wide receiver the past few seasons, and he has continued to make plays this year even though he faces constant double teams.

“Tremayne Tolbert is an explosive guy, but everybody we play double covers him,” Holt said. “It’s been hard to get him the ball.”

Despite that, Tolbert has still made plays this season, oftentimes making catches while having defenders draped all over him.

“If it’s in my vicinity, I’ll catch it,” Tolbert said.

Travis Johnson has also been a dependable target for Troup’s quarterbacks.

Dexter Shealey didn’t begin the season at quarterback, but since the third game he has taken the bulk of the snaps at that position.

“He’s gotten a little more confident, trusting his line a little bit more,” Tolbert said of Shealey. “He’s ready to go. He knows how the game works. We’re just rolling with him.”

Montez Crowe, a 6-foot-4 sophomore, has also played a fair amount at quarterback, including the entire second half of last week’s game against Carrollton.

All of the offensive players have had to learn a new system this season, and Tolbert said everyone has been working diligently to get things clicking.

“We’ve been working hard,” he said. “We work on a play until it’s perfect. Every week, whatever we messed up on, we go into the film room and tweak it until you get it right. We practice it every day.”

Troup’s offensive line will be buoyed this week by the return of Jorge Benitez, who has been out with an injury.

Senior offensive lineman Gabe Dowden has been out for much of the season with an injury, and Seymour has stepped up and helped fill the void.

“Mark has stepped up a lot since he started,” Newton said. “He’s ended up being a big part of the line.”

While the offense has gotten better and better, the defense has also made strides.