It’s a winning night for Grangers 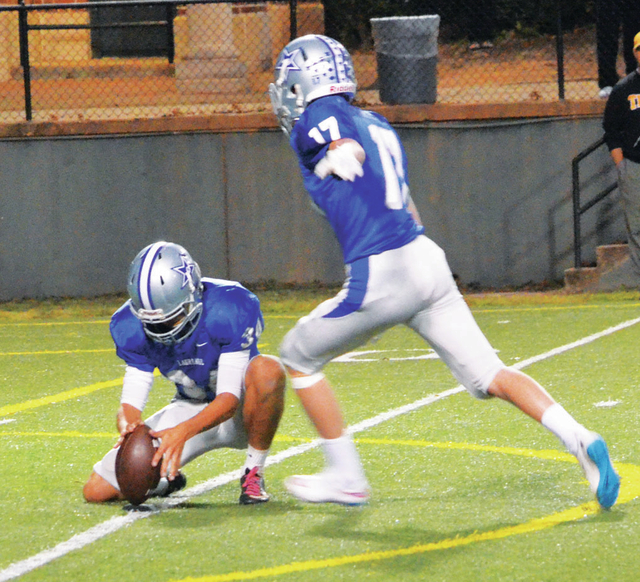 LaGrange running back Undriel Copeland follows his blockers during the second half of Friday’s 30-20 victory over Harris County. Kevin Eckleberry | Daily News

http://lagrangenews.com/wp-content/uploads/sites/37/2015/11/web1_LHS2.jpgLaGrange running back Undriel Copeland follows his blockers during the second half of Friday’s 30-20 victory over Harris County. Kevin Eckleberry | Daily News Matthew Thomas made a field goal to put LaGrange ahead to stay late in the third quarter. Kevin Eckleberry | Daily News

http://lagrangenews.com/wp-content/uploads/sites/37/2015/11/web1_11-2-LHS26.jpgMatthew Thomas made a field goal to put LaGrange ahead to stay late in the third quarter. Kevin Eckleberry | Daily News

LAGRANGE – With their season on the line, the LaGrange Grangers came through.

Late in Friday’s critical Region 1-AAAAA game at Callaway Stadium, Harris County scored a touchdown to get within three points, putting the pressure on the LaGrange offense to salt the game away.

That’s just what the Grangers did.

LaGrange went 80 yards in nine plays for the touchdown, and when LaPerion Perry scored on a 7-yard run with 31 seconds remaining, the game was effectively over.

With the 30-20 win, the Grangers (5-4 overall) improved to 3-2 in region play, and they’ll play the Northside Patriots next Saturday for the region’s second spot.

Six of LaGrange’s nine games so far this season haven’t been decided until the closing moments.

The Grangers lost the first four of those games, but they’ve now won two close ones in a row.

After beating Shaw 35-28 last week, LaGrange got a hard-earned victory over a Harris County team that needed to win to keep its slim playoff hopes alive.

“We had to win, and they had to win,” LaGrange head coach Dialleo Burks said. “We knew we were going to get their best. The only thing I can say is we’ve been in those type games before. We had certain spots (where thing went wrong), and I told them we’ve been here before. Nobody showed any doubt.”

After throwing four touchdown passes against Shaw, he did it with his legs in the Harris County game with scoring runs of 50, 33, 14 and seven yards yards.

He not only made three extra-point attempts, but his 22-yard field goal late in the third quarter gave the Grangers a lead they wouldn’t relinquish.

With 3:44 remaining, Darius Blackmon scored on a 3-yard run, and after a failed extra-point attempt, LaGrange’s lead was down to 23-20.

On first down, senior running back Undriel Copeland ripped off a 29-yard run that put the ball near midfield.

“That was real big,” Copeland said of that run. “It got the offense going, and we got momentum off that.”

It looked like the Grangers had scored moments later when Perry beat the defense for a 46-yard scoring run, but that play was negated by a penalty.

Later on the drive, Perry had a 25-yard run to the 8-yard line, and two plays later, his 7-yard scoring run put the game on ice.

“They put it away,” Burks said. “We talked all week about finishing. They worked for it. They came out and they worked for this tonight.”

With 4:16 left in the first quarter, Perry delivered his first touchdown from 50 yards out, and LaGrange led 6-0.

With 9:22 left in the half, Perry struck again for a 33-yard scoring run, and LaGrange led 13-0 after Thomas’ extra point.

Harris County cut into the lead with 1:12 left in the half when Chandler Lott threw a 10-yard touchdown pass to John McGowan.

As the two teams headed to the locker room, LaGrange’s lead was 13-7.

Harris County took the lead with 4:35 remaining in the third quarter.

James Adams scored on a 9-yard run, and the extra point put Harris County on top 14-13.

The Grangers responded, driving from their own 16-yard line to the Harris County 5-yard line before the drive stalled.

Thomas was called upon to give LaGrange the lead, and his kick split the uprights.

In the fourth quarter, after a short punt, LaGrange had the ball at the Harris County 39-yard line.

Harris County came right back with a quick touchdown before LaGrange finally put the game away.