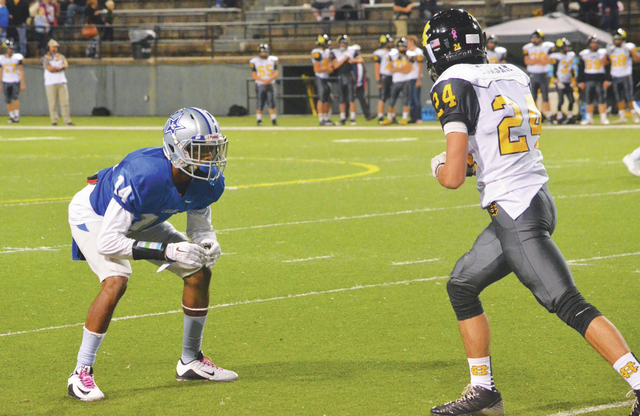 Matthew Thomas made a field goal to give LaGrange the lead late in the third quarter of Friday’s victory. Kevin Eckleberry | Daily News

http://lagrangenews.com/wp-content/uploads/sites/37/2015/11/web1_11-2-LHS261.jpgMatthew Thomas made a field goal to give LaGrange the lead late in the third quarter of Friday’s victory. Kevin Eckleberry | Daily News LAGRANGE – Through the first seven weeks of the season, the LaGrange Grangers had all sorts of trouble closing out tight games.

After a 51-50 loss to Carver, the Grangers were 3-4, and they had a chance to win everyone of the games they lost, but they were unable to get it done late.

That has changed the past two weeks.

In must-win games against Shaw and Harris County, the Grangers were the team making the plays in the closing moments.

After getting a big defensive stand late to beat Shaw 35-28, LaGrange went 80 yards in the final minutes for a game-clinching touchdown in a 30-20 victory over Harris County last week.

Those two wins have put the Grangers in great position to earn one of Region 1-AAAAA’s four playoff spots.

LaGrange will play Northside at Kinnett Stadium on Saturday at 3 p.m., and the winner of that game will be the region’s second seed and will host a playoff game.

If the Grangers lose, they could find themselves in a three-way tie for third place with Shaw and Columbus, and only two of those teams will make it to the playoffs.

After falling to 1-2 in the region, the Grangers knew they couldn’t afford to stumble again, and they have rebounded for two hard-fought victories.

“We have a lot of character,” senior linebacker Jeremiah Wright said. “We’ve been through a lot of tough games, stressful games, and we pulled through.”

Now, the Grangers will try to do it one more time.

Northside had a chance to win the region championship last week, but it lost a 28-25 heart-breaker to Carver.

Now Northside needs a win over LaGrange to avoid having to go on the road for the first round of the playoffs.

In last week’s game, Northside had a 25-20 lead late, but Carver scored a touchdown to take a three-point lead, and it held on from there.

LaGrange had to beat a determined Harris County team to strengthen its playoff hopes.

Harris County scored a touchdown with 3:44 remaining to get within three, putting all the pressure back on LaGrange’s offense.

The Grangers responded with an 80-yard scoring drive that was capped by a 7-yard touchdown run by LaPerion Perry with 30 seconds remaining.

“We talked all week about finishing,” LaGrange head coach Dialleo Burks said. “They worked for it. They came out and they worked for this tonight. They’re learning.”

It helped that the Grangers had Perry on their side.

The junior quarterback scored all four of LaGrange’s touchdowns on runs of 50, 33, 14 and seven yards.

Senior running back Undriel Copeland also had a big night with more than 100 yards on the ground.

Copeland had one of the biggest runs of the night.

After Harris County’s final touchdown, Copeland had a 30-yard run to midfield, and he carried the ball five times for 44 yards on that scoring drive.

“He runs hard, and he never gives up,” Perry said of Copeland.

Harris County then surged to a 14-13 lead with a third-quarter touchdown, but LaGrange responded.

LaGrange drove from its own 16-yard line to the Harris County 5-yard-line, setting up a Matthew Thomas field goal.

In the fourth quarter, LaGrange only needed to go 39 yards for a touchdown after a short punt, and Perry finished off the short drive with a 14-yard scoring run.

Harris County answered with an impressive touchdown drive of its own before LaGrange finally ended the suspense.