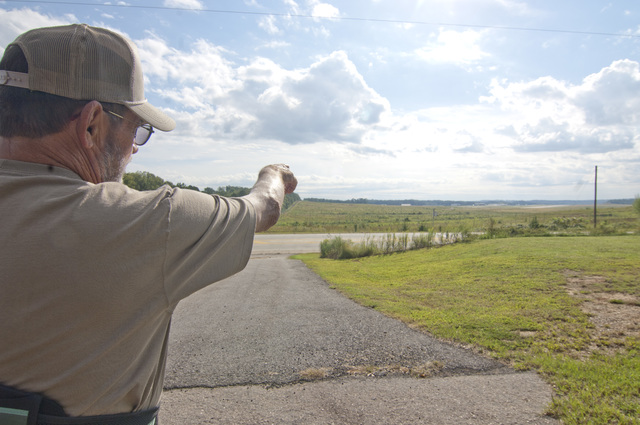 Don Hale of Bradfield Drive points toward the location where the LaGrange-Callaway Airport runway will be extended 900 feet. Hale and other homeowners are concerned about how they have been compensated for the air-space rights above their homes.

http://lagrangenews.com/wp-content/uploads/sites/37/2015/11/web1_Avigation1.jpgDon Hale of Bradfield Drive points toward the location where the LaGrange-Callaway Airport runway will be extended 900 feet. Hale and other homeowners are concerned about how they have been compensated for the air-space rights above their homes.

LaGRANGE — A group of homeowners in southwest LaGrange are concerned about how the runway expansion of the LaGrange-Callaway Airport will affect their property values.

The county placed easements on the airspace above several homes that limit how tall structures and trees can be and how the property can be used in the future, according to John E. Arrington, who owns one of the affected homes on West Point Road.

In the years leading up to the runway’s planned 900-foot expansion, 46 parcels of land were noted to be in the planned landing approach zone and all but 12 landowners have settled with the government, Tentler said.

Arrington said he has not settled because he feels that the county’s compensation offer was too low. Between 2010 and 2014, the Georgia Department of Transportation contracted firms to conduct three appraisals of Arrington’s property. The second appraisal was thrown out by GDOT because it used the Atlanta-area Peachtree Dekalb Airport as a comparison and officials thought that wasn’t fair, according Tentler.

Arrington said he is also concerned because the county has not told him which trees on his property may be cut down.

“That’s an abomination when they expect me to estimate the damages that I’m suffering and they won’t tell me which trees they’re going to cut,” Arrington said. “I thought that was unreasonable to ask me to sign an (easement) agreement and not even know which ones are going to be cut.”

The county manager refuted Arrington’s allegation and said the homeowners had been shown which trees would be taken down.

“They were shown which trees were going to be cut down,” Tentler said. “Whether or not they (GDOT) get the easement or not, they’re going to cut them because of the zoning ordinance. There’s an airport zoning ordinance that allows the airport to keep the runway approaches clear.”

Arrington said he understands the need for the runway expansion, and that it will benefit the county economically, but he feels like he’s been treated unfairly through the air-rights acquisition process.

“We understand the economic value that the airport could provide to this community,” Arrington said. “We (homeowners) don’t feel like we’re being treated as part of the community, we feel like we’re being asked to sacrifice. We want to be compensated for the value of the air rights that they have to have, and for the damages that we’re going to have to deal with for the rest of our lives.”

Tentler said some of the homeowners have filed litigation notices with the county.

Don Hale, who lives next door to the property owned by Arrington, said he also feels he hasn’t been offered enough compensation for the air rights above his home. At the highest point on his property, he would have 10 feet, 4 inches of clearance before the air easement begins, he said.

“None of the landowners have balked at the project being done,” Hale said. “At no period of time in this six years have I ever heard any property owner say anything bad about the project happening. I think the complaints are the process that the county and the state took in order to do it, and the way that they handled it and the ridiculous amount of damages they offered us.”