Plenty on the line for Grangers 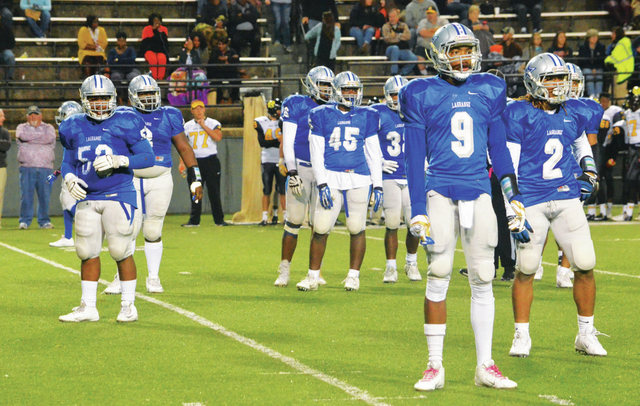 The LaGrange Grangers can finish second in Region 1-AAAAA with a road win over Northside on Saturday. Kevin Eckleberry | Daily News

LAGRANGE – For the LaGrange Grangers, the playoffs started early.

When the Grangers lost to the Carver Tigers 51-50 on their home field, they fell to 1-2 in Region 1-AAAAA, and their hopes of being a playoff team were hanging in the balance.

So in essence, the Grangers were in playoff mode as soon as that Carver game ended.

So far, LaGrange is handling that pressure just fine.

Those two wins have put the Grangers in great position to secure one of the region’s four playoff spots, but the work is far from done.

If LaGrange beats Northside on Saturday at 4 p.m. at Kinnett Stadium in Columbus, it will be the region’s number two seed, and it will host a state-playoff game for the first time since 2009.

If the Grangers lose, they could end up in a three-way tie for third place with Shaw and Columbus.

If those three teams finish tied, the head-to-head tie-breaker wouldn’t apply since they all went 1-1 against each other, so they would participate in a mini-playoff next week to determine the region’s final two playoff teams.

The situation is much more clear-cut for the Callaway Cavaliers in Region 5-AAA.

Callaway will play Central-Carroll for the region championship on Friday, and the loser will be the region’s number two seed.

In Region 1-AAAAA, there’ll be plenty of suspense in the final weekend of the season.

The number one spot has been decided, with Carver (5-0 in the region) claiming the region championship, but there is still plenty up for grabs.

Only Harris County and Hardaway have no chance of making the playoffs.

On Friday night in Hamilton, Harris County will host Shaw.

Here are the different playoff scenarios.

If Harris County beats Shaw, the four playoff teams will be Carver, Northside, LaGrange and Columbus.

If Shaw wins, though, there will be the possibility of the three-way tie for third with LaGrange and Columbus.

Columbus has already finished its regular season with a 3-3 record, so it will sit back and wait to see how things play out.

Columbus, which lost its head-to-head matchup with Shaw, has two different routes to the playoffs.

If Shaw loses to Harris County, Columbus is in.

Columbus could also make it in via the mini-playoff if Shaw and Northside both win.

If Shaw and LaGrange both win, Columbus will not make the playoffs.

If Shaw beats Harris County and LaGrange beats Northside, Shaw will be in the playoffs.

If Shaw beats Harris County but Northside wins, it could still earn its state spot in the mini-playoff.

LaGrange doesn’t have to worry about any of the different scenarios if it goes out and beats Northside on Saturday.

A win, and the Grangers would be at home the following weekend for a first-round playoff game.

The last time LaGrange hosted a playoff game was in 2009 when it lost to Liberty County 16-13 in overtime.

In Region 5-AAA, the top three playoff teams have been determined.

The number four seed will be decided when Rockmart plays at Cedartown on Friday.

In Region 5-AAAA, the four playoff teams are Woodward Academy, Sandy Creek, Carrollton and Fayette County, although the order is still up for grabs.

Troup and Whitewater, who will play on Friday, have both been eliminated from playoff contention.

Woodward Academy leads the way with a 4-0 region record, Sandy Creek and Carrollton are both 3-1, and Fayette County is 2-2.

On Friday, Woodward Academy will host Carrollton, and Sandy Creek will host Fayette County, so there are still a few different directions things can go.

If Woodward Academy and Sandy Creek both win, they’ll be the top two seeds, Carrollton will be third, and Fayette County will be fourth.

Here are the region standings, with overall record first followed by region record.