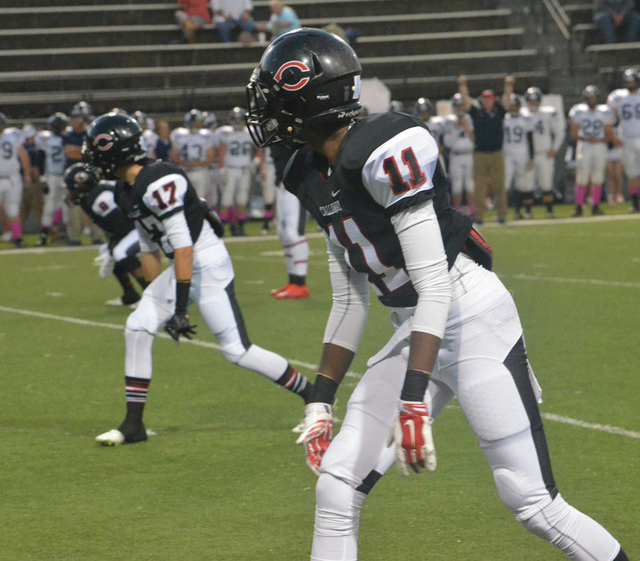 Joe Brown and Callaway’s other wide receivers wait on the snap last week against Haralson County. Brown had a touchdown catch in that game. Kevin Eckleberry | Daily News

http://lagrangenews.com/wp-content/uploads/sites/37/2015/11/web1_10-30-CHS8.jpgJoe Brown and Callaway’s other wide receivers wait on the snap last week against Haralson County. Brown had a touchdown catch in that game. Kevin Eckleberry | Daily News

LAGRANGE – There will be plenty of play-makers on the field Friday night in Carrollton.

When the Callaway Cavaliers and Central-Carroll Lions meet for the Region 5-AAA championship, there will be no shortage of players capable of doing big things with the ball in their hands.

Few players in the state have done more with the football than Callaway running back Cedric Maynard, who is closing in on 2,000 yards, but there will be plenty of other big-time offensive players on the field as well.

Even without quarterback Braylon Sanders, who suffered a knee injury against Cedartown on Oct. 8, Callaway’s offense has continued to roll.

The Cavaliers (8-1) have scored at least 33 points in each of their past six games, and much of the scoring has come in the first half of those games.

Central (9-0) isn’t scoring as many points as Callaway, but it is still a team with a lot of offensive firepower.

Central has a senior running back in Damarious Owensby who has run for more than 1,000 yards and is averaging nearly nine yards a carry, and four players have scored at least four touchdowns this season.

The defenses for Callaway and Central have both played well this season, but they’ll have their hands full when kickoff arrives at 7:30 p.m. on Friday.

While Central has plenty of players capable of hurting opposing defenses, the number one option is Owensby.

It’s been a fantasic season for Owensby, who has run for 1,173 yards with an impressive 15 touchdowns, and he’s averaging 8.8 yards per carry.

Before being limited to 46 yards last week against Rockmart, Owensby had eight consecutive 100-yard games, and twice this year he surpassed 200 yards.

In four other games this season, Owensby has scored two touchdowns in a game.

“He’s a good player,” Hubbard said of Owensby. “With the Wing T, they run a lot of different guys. Their fullback, he’s a pretty good little player. But there’s no doubt number six (Owensby), he’s their guy. He’s a tough little runner. When it comes down to it and they need it, that’s the guy they go to.”

Senior running back Byron Brown has run for 412 yards with four touchdowns, and he ran for 101 yards in a victory over Pepperell.

Joe Simpkins, the fullback Hubbard referenced, has run for 234 yards with four touchdowns.

Senior quarterback Jaleel Terry has provided a strong running presense as well with 163 yards and four touchdowns, and while he hasn’t been a prolific passer, that threat is there.

Twice this season Terry has thrown for more than 100 yards, and he has three touchdown passes.

He has caught at least one pass in every game, and he has two touchdown receptions.

“They’ve got a wideout, about 6-4, and at least two or three times a game, they’re going to throw him up a fade and give him a shot to go get it,” Hubbard said of Tyler Terry. “A lot of times he does (catch it), and sometimes he doesn’t, but they’ll give him his opportunities. Anytime you have a kid that big, that’s scary.”

Hubbard said Central’s strong offensive line is “kind of what they lean on.”

It’s not an overly complex offense, but it is effective, and Central usually doesn’t need to score many points anyway thanks to its dominant defense.

‘They’re just really solid on offense,” Hubbard said. “They’re coached up well, and they’re really efficient with their blocking and things like that. They do the things they do really well.”

As for the Cavaliers, it’s no secret what they’re going to do, either.

When you have someone who has run for more yards than any other running back in the state, you get him the ball.

By the time the first half of Friday’s game against Central-Carroll ends, Maynard may have surpassed 2,000 yards for the season.

Maynard has run for at least 100 yards in every game this year, and he has had 200 or more yards in most of the games, and twice he has surpassed 300 yards.

In last week’s game against Haralson County, Maynard was on the field for less than a half, but he still ran for 178 yards on just nine carries, and he had three touchdown runs.

Through nine games, the numbers are staggering.

“When I see the end zone, I’m gone,” Maynard said after a four-touchdown performance against Pepperell that included touchdown runs of 90 and 62 yards.

Depending on how long Callaway stays alive in the playoffs, Maynard has a chance to enjoy one of the best seasons of any running back in state history.

According to the Georgia High School Football Historians Association which keeps track of state records, 15 running backs have run for more than 2,500 yards in a season.

At Maynard’s current pace, he would have a chance to reach that milestone in a third-round playoff game if Callaway makes it that far.

While Maynard is clearly option one in Callaway’s offense, he’s not doing it by himself.

Before his injury, Sanders had become more and more comfortable in his first season as the Cavaliers’ quarterback.

A standout wide receiver a year ago, Sanders worked throughout the spring and summer at quarterback, and he was doing a terrific job of running the offense when he hurt his knee a month ago.

In stepped junior Dylan Johnson, who was hardly new to the position.

A year ago, after then quarterback Terry Godwin was injured in the regular-season finale, Johnson was Callaway’s quarterback in both playoff games.

So when Johnson’s number was called, he was ready.

Against a Pepperell team that was 5-2 at the time, Johnson completed 7-of-8 passes for 85 yards with a touchdown, and he also had some nice runs.

Johnson and Sanders have both gotten the ball to a handful of different receivers, including seniors Dre Martin, Joe Brown and Devin Brock, as well as tight end Michael Freeman.

In the running game, senior Tyrek Frazier has been productive when he’s been called upon.

Against Cedartown, Maynard didn’t play in the second half because of an illness, and Frazier stepped in and scored three touchdowns.

Fullback Brandon Boddie is used mostly in a blocking capacity, but he has excelled when he has gotten a chance to carry the ball.

In last week’s win over Haralson County, Boddie scored on a 5-yard run.

Callaway head coach Pete Wiggins said Boddie brings a lot to the offense, and not just because of what he does on the field.

“Brandon Boddie is an unselfish player, and a great kid, and he just brings such a positive energy to our team,” Wiggins said.

Throw in an offensive line that has been solid all season, and it’s no surprise the Cavaliers have been scoring points in bunches all season.

Which offense will have the upper-hand?

OF NOTE: For a look at the defenses for Callaway and Central-Carroll, see Wednesday’s sports section.