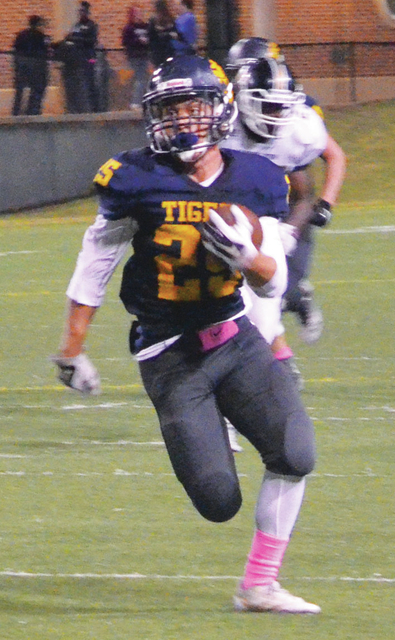 Quarterback Dexter Shealey and running back Mess Bonner both have big nights for the Troup Tigers in Friday’s 37-35 loss to Fayette County. Kevin Eckleberry | Daily News

http://lagrangenews.com/wp-content/uploads/sites/37/2015/11/web1_11-2-troup.jpgQuarterback Dexter Shealey and running back Mess Bonner both have big nights for the Troup Tigers in Friday’s 37-35 loss to Fayette County. Kevin Eckleberry | Daily News FAYETTEVILLE – They were so close.

Despite everything that has gone wrong for the Troup Tigers this season, they headed into last week’s game against Fayette County with their playoff hopes fully intact.

It came down to one play.

After Mess Bonner scored on a 76-yard touchdown run, Troup had a 35-34 lead over Fayette County with about three minutes to go.

A miss would mean the Tigers would not only have their first win of the season, but they’d head into their regular-season finale against Whitewater with a chance to clinch a playoff berth.

The kick was true, and it sailed through the uprights with less than 10 seconds left to give Fayette County a two-point lead.

Troup was unable to return the ensuing kickoff for a touchdown, and Fayette County celebrated a 37-35 victory on its home field.

Troup fell to 0-9, and it will try to avoid a winless season when it visits Whitewater.

“There are no moral victories,” Troup head coach Tanner Glisson said Saturday morning. “We went up there with a good game plan, and we expected to win the game, and we didn’t.”

The Tigers came as close as they have all season to getting that elusive win.

Bonner, a senior running back, had a huge night with four touchdowns, and junior Camren Russell added a long scoring catch.

Senior quarterback Dexter Shealey, who has done well in that role this season, had three touchdown passes.

Fayette County’s kicker found the range for his third field goal of the night to keep his team’s playoff hopes alive.

Glisson said after the game “we did a lot of crying, and a lot of hugging.”

After a Fayette County fumble, Bonner had a 24-yard scoring run, and Michael Young’s extra point gave Troup a 7-0 lead.

After Fayette County built a 10-7 lead, Troup went back on top when Shealey threw a 35-yard scoring pass to Bonner with 6:48 to play in the first half.

Bonner took a short pass from Shealey, and with the help of some outstanding down-field blocking, he made it to the end zone.

Fayette County answered with a touchdown to take a 17-14 lead, which was the score at the half.

Shealey, a junior running back, caught a short pass from Shealey and he ended up taking it the distance for a 65-yard touchdown, and Young made the extra point to give his team a 21-20 lead with 4:31 to play in the third quarter.

With three seconds left in the third quarter, it was Shealey hooking up with Bonner for a 27-yard touchdown, and Troup was ahead 28-20.

Again it was a short pass play, and Shealy shrugged off a tackle attempt at the 5-yard line to muscle his way into the end zone.

Fayette County rallied for a pair of touchdowns to take a 34-28 lead, but once again Troup responded.

Bonner took a handoff from Shealey, and after he made it through the line of scrimmage, he left a host of Fayette County players in his wake.

Young made the all-important extra point, giving Troup a one-point lead, but Fayette County had enough time to mount what turned out to be the game-winning drive.