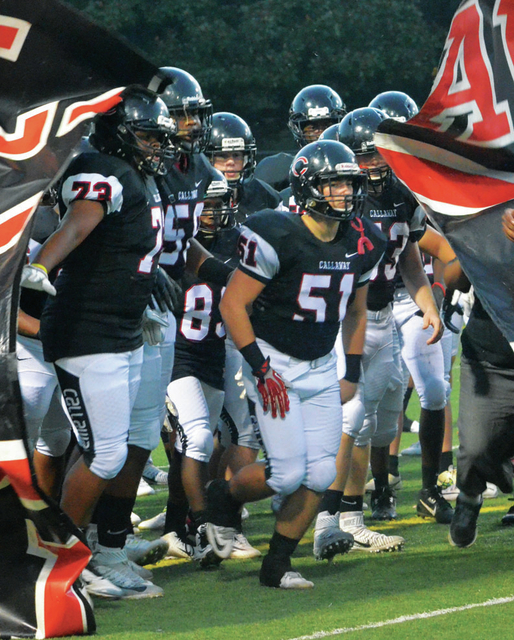 Callaway moves up to ninth in prep poll LAGRANGE – It’s been a long time since the Central-Carroll Lions lost a regular-season game.

On Oct. 11 of 2013, Central-Carroll traveled to LaGrange to take on the Callaway Cavaliers in a region showdown.

That game belonged to the Cavaliers.

Callaway, which was in the midst of a sensational season that ended in the state semifinals, blew out Central-Carroll 46-13 on the way to a region title.

Since that loss, Central-Carroll has been a perfect regular-season team.

After winning their final three regular-season games in 2013, the Lions enjoyed a flawless regular season a year ago.

Now, the Lions are one victory away from a second consecutive perfect regular season, and the Callaway Cavaliers are standing in their way.

Central will bring a 9-0 record into Friday’s home game against Callaway (8-1), which has won eight in a row since a season-opening loss to LaGrange.

Not surprisingly, Central and Callaway have both found a place in the Georgia Sports Writers Association prep poll.

Central has moved up a spot to third in Class AAA, while Callaway remains in ninth place.

Sports writers at newspapers across the state vote in the poll.

Perennial powerhouse Calhoun, which won a state championship a year ago, is ranked first in Class AAA, and Blessed Trinity is second.

After Central-Carroll, Cedar Grove and Elbert County round out the top five.

Dodge County is sixth, and it is followed by Jefferson, Adairsville, Callaway and Jackson.

Woodward Academy is tops in Class AAAA, Benedictine is ranked first in Class AA, and Mount Paran is the top team in Class A.

There will be one more poll next week, and that will be the final one until the state playoffs are finished.