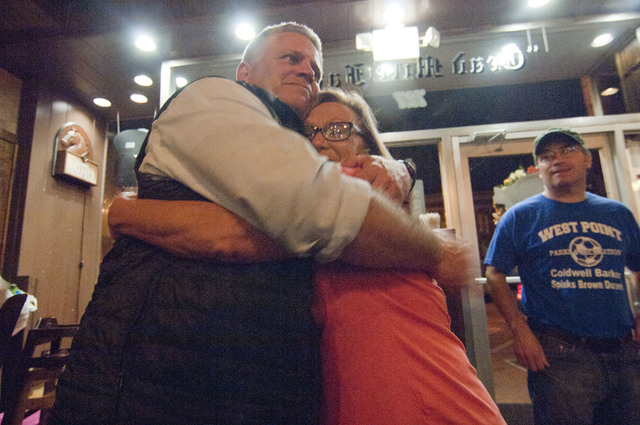 West Point Mayor Drew Ferguson hugs a supporter Tuesday evening at the Irish Bred Pub on Third Avenue after learning he was elected for a third term.

http://lagrangenews.com/wp-content/uploads/sites/37/2015/11/web1_Ferguson1.jpgWest Point Mayor Drew Ferguson hugs a supporter Tuesday evening at the Irish Bred Pub on Third Avenue after learning he was elected for a third term.

Drew Ferguson won by 26 votes out of a total of 846 to defeat challenger Deedee Williams, according to the Harris County elections supervisor, who oversaw the city’s vote tallying.

“We’re very grateful and very thankful to look forward to serving another four years,” Ferguson said after the results came in. “Let me thank Mrs. Deedee Williams for her interest in serving. It was a very, very close race, and we’ve got a lot of work to do to bring this community together, and I have the belief that we will come together and we will be strong going forward. I’m very thankful for the support. “

Williams, who took 410 total votes, said she’s proud of the campaign she ran and plans to call for a recount of the final vote tally.

“I think that we raised the awareness of the citizens of West Point and I hope that we’ll see some positive change as a result of that,” she said.

Ferguson, a West Point native, garnered 436 votes and said he will work to continue to create a rejuvenated city focused in its residents.

In the hours leading up to the final election results, Ferguson said he wasn’t sure who would win. He and his supporters gathered at the Irish Bred Pub on Third Avenue to anxiously await polling numbers. Before the results came in, Ferguson seemed resigned to accept the vote either way.

“The best test of leadership is what you leave behind,” he said. “You have to stock the wood pile so that if you’re hit by a bread truck tomorrow, there’s still someone who’s around to continue the progress you’ve made. In the end, it’s about the people you serve. Think about economic development. Why do you do that? It’s to raise the standard of living for the citizens and work to eliminate poverty.”