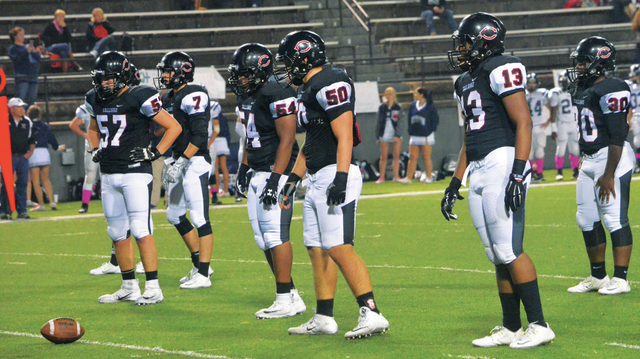 When it comes to the Central-Carroll Lions, it’s all about the defense.

Central-Carroll has an offense that has been prolific at times, but the team is 9-0 and ranked third in Class AAA primarily because of its suffocating defense.

Callaway’s defense has been getting it done as well.

Callaway’s high-octane offense led by running back Cedric Maynard steals a lot of the headlines, but the defense has been a strong suit as well.

Both of those defenses will try to stand tall on Friday night when Callaway and Central-Carroll get together in Carrollton to play for the Region 5-AAA championship.

Last year’s game was dominated by the offenses, with Central-Carroll beating Callaway 40-34.

While both teams have the offensive play-makers to put up some points again this season, it’s hard to see the teams combining for 74 points again considering the caliber of defenses involved.

For Callaway’s defense, there are no holes.

The defensive line, led by senior JT Wortham, has been terrific, and a linebacking unit anchored by Javoski Leverette has been a strength of the team.

The defensive backfield, with Tyrek Frazier leading the way, has held its own as well.

As for Central, its defense has been a brick wall.

The Lions have only given up 81 points in nine games, and in five of their games they’ve allowed seven or fewer points.

One of Central’s defensive stalwarts is senior defensive lineman Gabe Wiggins, who has lived in opposing backfields.

Wiggins has a ridiculous 22 tackles for loss, including 11 sacks, and he has 46 total tackles.

In last week’s 14-6 win over Rockmart, Wiggins had 10 tackles, and he had a whopping seven tackles for loss earlier this season against Hardaway.

Rick Dyer, a junior middle linebacker, leads the team with 59 tackles, and he had 13 of those tackles in a hard-fought 20-13 win over Landmark Christian.

Another Central player who, like Wiggins, has spent a lot of time in opposing backfields is linebacker Lamar Daniel, who has 29 total tackles, and 18 of them have been for loss.

In last week’s win over Rockmart, Daniel made five tackles behind the line of scrimmage.

In all, Central has made 93 tackles for loss, which is about 10 per game.

Central has eight interceptions as a team, and Zeke Lawson and Rick Dyer each have two of them.

Callaway’s defense has given up 154 points this season, but 45 of those points came in the season opener against LaGrange.

Of late, Callaway’s defense hasn’t given up much of anything.

Most of the points the Cavaliers have surrendered in their four region games came in the second half when the starters were out of the game.

A trademark of Callaway’s defense over the years has been a dominant defensive line, and that has been the case this season.

Wortham, a senior, has been among the team’s leaders in tackles in nearly every game this season, and fellow defensive linemen Rashawn Lovelace, Keegan Ramsey and Keegan Woods have been strong as well.

At the linebacker position, Leverette has bounced back nicely this fall after missing nearly the 2014 season with a broken leg and has been an elite defensive player.

Callaway’s secondary was shaken up when Dylan Johnson had to move to quarterback, leaving a void at the safety position, and Courtney Williams has stepped in and played well there.

Along with Frazier, Dominic Copeland has performed nicely in the secondary.

Because the Cavaliers have had so many blowout wins, every defensive player on the team has been able to get some time on the field, including sophomore defensive lineman Lichon Terrell, who led the team with nine tackles against Haralson County last week.

GAME NOTE: Central-Carroll will host Callaway at 7:30 p.m. on Friday. The winner will be the Region 5-AAA champion.