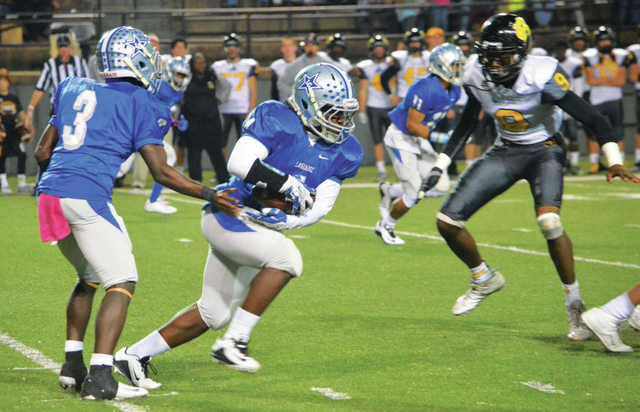 LaGrange quarterback LaPerion Perry hands the ball off to Undriel Copeland during last week’s game against Harris County. Copeland ran for 140 yards in the 30-20 victory, and Perry had 169 yards with four touchdowns. Kevin Eckleberry | Daily News

http://lagrangenews.com/wp-content/uploads/sites/37/2015/11/web1_11-4-LHS8.jpgLaGrange quarterback LaPerion Perry hands the ball off to Undriel Copeland during last week’s game against Harris County. Copeland ran for 140 yards in the 30-20 victory, and Perry had 169 yards with four touchdowns. Kevin Eckleberry | Daily News

There are a lot of attributes an effective running back needs to have, and one of the biggest ones is the ability to turn what could be a negative play into a positive one.

Undriel Copeland, a senior on the LaGrange High football team, is that sort of running back.

When Copeland has the ball in his hands, he doesn’t always rip off huge chunks of yardage, but he finds a way to surge forward, to make sure his team is closer to the end zone than it was before the play began.

LaGrange head coach Dialleo Burks was hoping that Copeland, who transferred from Northside High in Columbus following his junior season, would be a foundation of the running game from the get-go this season.

It didn’t work out that way.

Copeland missed the first five games of the season because of an injury, and he saw his first game action in a 21-13 loss to Columbus on Oct. 2, and he scored a touchdown that night.

Copeland has been getting better and stronger since then, and he had a breakout game in last week’s 30-20 victory over Harris County when he ran for 140 yards.

Copeland teams with fellow senior Kimani Barnes to give the Grangers a potent one-two combination at the running-back position.

Barnes injured his ankle in the Harris County game, so Copeland ended up getting almost all of the carries.

It was late in the fourth quarter, and Harris County had just scored a touchdown to get within three.

LaGrange took over at its own 20-yard line with less than four minutes remaining, and on first down, Copeland took off on a 30-yard run to midfield.

“That was real big,” Copeland said. “It got the offense going, and we got momentum off that.”

Copeland followed that big gain up with runs of five, four, two and three yards.

They weren’t big gainers, but they were critical yards as the Grangers looked to chew up the clock and put the game away.

“He runs hard, and he never gives up,” LaGrange quarterback LaPerion Perry said of Copeland.

Perry capped that nine-play, 80-yard drive with a 7-yard scoring run with 30 seconds remaining, and the game was over.

Perry headlined LaGrange’s offense in the Harris County game with 169 yards, and he scored all four of his team’s touchdowns.

Copeland didn’t find the end zone, but his offensive contributions were critical, especially in the second half.

Copeland only had four carries in the first half, but he got the ball 18 times in the second half, and almost all of his rushing yardage came in the final two quarters.

“Our offense, we try to mix it,” Copeland said. “I helped a lot with the offense and did what I had to do to help the team win.”

The men who block for Copeland appreciate how he runs.

“He fights for every yard he gets,” junior offensive lineman Jordan Ragan said.

If Barnes is able to play on Saturday against Northside, LaGrange will be in great shape at the running-back position.

Barnes is also a tough runner who has had some big moments during his senior season.

At other times this season, Jeremiah Wright and Amad Oglegree have run the ball, and fullback Keaote Davis has scored a few touchdowns from his fullback position.

Of course the bulk of LaGrange’s rushing yardage this season has been provided by Perry, who tormented the Harris County defense with scoring runs of 50, 33, 14 and seven yards.

As dynamic as Perry has been since Week 1, Wegienka said LaGrange’s offense is better than it has been all season right now because of the number of players contributing, including Copeland.

“Two weeks ago when we played Shaw, we had two running backs with 100 yards rushing,” Wegienka said. “It’s not just LaPerion. LaPerion’s a great player, and he’s quick, he’s fast, he can do it all, but we have other guys, other running backs, and receivers, and the offensive line is doing the job.”