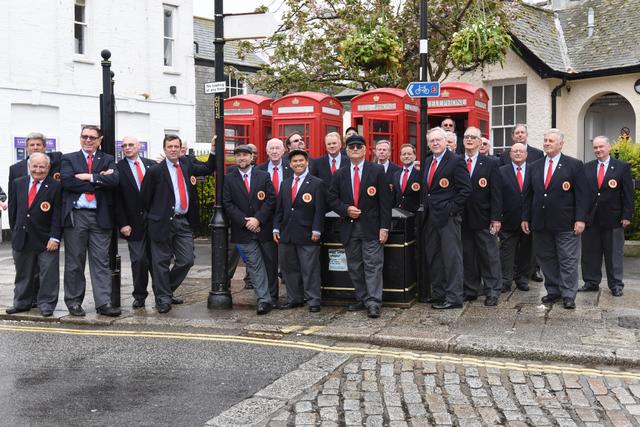 The Sons of LaFayette choir is shown in Truro, England, while participating in the 2015 Cornwall International Male Voice Choral Festival. The Sons of LaFayette will be teaming up with the Paine College Chamber Singers for the choir’s Fall Concert Series this weekend at First Presbyterian Church.

http://lagrangenews.com/wp-content/uploads/sites/37/2015/11/web1_WEB1104SonsOfLafayette1.jpgThe Sons of LaFayette choir is shown in Truro, England, while participating in the 2015 Cornwall International Male Voice Choral Festival. The Sons of LaFayette will be teaming up with the Paine College Chamber Singers for the choir’s Fall Concert Series this weekend at First Presbyterian Church.

LaGRANGE — The Sons of LaFayette male choir is teaming up with the Paine College Chamber Singers for as part of the choir’s Fall Concert Series this weekend at First Presbyterian Church.

Sons of LaFayette artistic director R. Wayne Woodson said the concert theme will be “Southern connections” and will include only songs from Southern composers. He said in order to keep each concert new and fresh, he wanted to explore a range of music that hadn’t been done before, and the group has not yet featured its Southern connections.

Woodson, who is in his third year as the director for Sons of LaFayette, is also an assistant professor and director of Paine’s college of music department. This concert will be the first time the two singing groups come together.

The concert’s repertoire includes patriotic, classical, folk, spirituals, gospel, barbershop, show tunes, pop and rock ‘n’ roll songs. Woodson said he hopes to expand on what the Sons of LaFayette have done in the past while keeping the tradition of its choir alive.

“It is going to be a very entertaining and exciting program,” Woodson said. “Probably one of the most energetic concerts people have ever experienced.”

While the audience will be familiar with classic church hymns, Woodson said the concert will bring a lot of new music. He said his artistic direction aims to appeal to a much larger audience while also trying to diversify the compositions.

“We have really switched the entire program,” he said.

By expanding the repertoire of the Sons of LaFayette, Woodson said he hopes to recruit younger and diverse singers.

Woodson said the joint concert will bring a diverse dynamic as the Sons of LaFayette are an all-male and predominantly white chorus with members over 40. The Paine College Chamber Singers are college-aged and African-American men and women.

The Sons of LaFayette group is in its 14th year, and earlier this year the members placed fifth in their division at a world competition in Cornwall, England, at the Cornwall International Male Voice Choir Festival and competition. The division included 12 choirs.

The Paine College Chamber Singers are also no stranger to performance recognition as the group placed second at the Detroit Spiritual Festival in January.

The joint concert is Saturday at 7:30 p.m. and Sunday at 3 p.m. Tickets are $15 and may be purchased online through Friday at www.sonsoflafayette.org or at the door at each concert.

Former medic turns himself in at jail