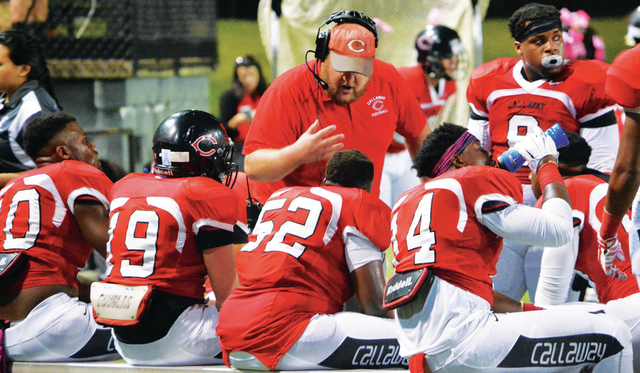 The Callaway Cavaliers charge onto the field before a game earlier this season. Callaway will play Central-Carroll on Friday for the Region 5-AAA championship. Kevin Eckleberry | Daily News

http://lagrangenews.com/wp-content/uploads/sites/37/2015/11/web1_11-5-CHS1.jpgThe Callaway Cavaliers charge onto the field before a game earlier this season. Callaway will play Central-Carroll on Friday for the Region 5-AAA championship. Kevin Eckleberry | Daily News Callaway offensive lineman Cortney Laye and wide receiver Courtney Williams congratulate running back Cedric Maynard after one of his 21 touchdowns this season. Maynard will try to keep it going on Friday against a strong Central-Carroll defense. Kevin Eckleberry | Daily News

http://lagrangenews.com/wp-content/uploads/sites/37/2015/11/web1_11-5-callaway1.jpgCallaway offensive lineman Cortney Laye and wide receiver Courtney Williams congratulate running back Cedric Maynard after one of his 21 touchdowns this season. Maynard will try to keep it going on Friday against a strong Central-Carroll defense. Kevin Eckleberry | Daily News Before the season began, before the first touchdown was scored, before the first snap was made, it seemed inevitable that the regular season would end with Callaway and Central-Carroll playing for the Region 5-AAA championship.

So to the surprise of absolutely no one, those two teams will face off in Carrollton on Friday with the region title on the line.

It has been a fantastic season for both teams.

The Central-Carroll Lions (9-0, 4-0 in region play) have had some close calls of late, but they have won every time they’ve stepped onto the field, and they’re one victory away from a second consecutive perfect regular season.

Callaway (8-1, 4-0) dropped its first game to LaGrange, but it hasn’t lost since, and it will carry an eight-game winning streak into Friday’s game.

“It’s for the region championship, they’re ranked in the top five in the state, and they’re 9-0,” Callaway head coach Pete Wiggins said. “So, it’s what you put all that work in for. I’m excited for our kids and the opportunity they have on Friday night.”

After winning back-to-back region championships in 2012 and 2013, Callaway had a chance to make it three in a row a year ago.

Instead, it was Central-Carroll walking away with a 40-34 victory, and the region title, after returning a blocked field-goal attempt for a touchdown as time expired.

One year later, those same two teams are ready to tangle again, this time at Central-Carroll’s stadium.

“We are similar in a lot of ways, and it should be a great atmosphere Friday night in Carrollton,” Wiggins said.

The season started on a down-note with a 45-20 loss to LaGrange, but Callaway bounced back the following week for a 30-14 victory over B.E.S.T. Academy.

The Cavaliers then rallied from a 17-0 deficit in the first half to beat the Heard County Braves 20-17, and they were off and running.

The Cavaliers have dominated their past six opponents, and they have been getting it done on both sides of the football.

Callaway’s offense, with Cedric Maynard rushing for more yards than any running back in the state, has been unstoppable, and the defense has been suffocating.

“From a coaching standpoint, if you can get your kids to leave everything they’ve got on the field, and get better each week, that’s what it’s all about,” Wiggins said. “We’ve grown as a football team. We’re practicing hard every day, and they come to work ready to go. And we’re still lifting hard. They’ve got a positive attitude, and that’s a big part of the success. They come to work each day. They’re positive, and I’m just really proud of their work ethic and their attitude at this point.”

Callaway’s offense is averaging 33 points per game, and Maynard has done a lot of the damage.

In nine games, Maynard has run for 1,928 yards with 21 touchdowns, and he is averaging more than 12 yards everytime he touches the ball.

Maynard is hardly a one-man show, though.

Tyrek Frazier is also a threat at running back, fullback Brandon Boddie has been effective when he has carried the ball, and Dre Martin, Joe Brown and Devin Powell among others have done a great job catching the ball.

Callaway has had a change at the quarterback position.

Junior Braylon Sanders, a standout wide receiver a year ago, was Callaway’s starting quarterback for the first six games, but he suffered a knee injury in the region opener against Cedartown.

In stepped Dylan Johnson, one of the most versatile players on the Callaway roster.

Johnson was doing a tremendous job as a safety on defense, and after Sanders went down, he began to focus most of his attention on quarterback.

With Johnson at the helm, Callaway’s offense has continued to hum right along.

Johnson was also Callaway’s quarterback for two playoff games a year ago after the injury to Terry Godwin, so he was ready to take over after Sanders went down.

During his three season on the football team, Johnson has done a bit of everything.

He’s played multiple positions on defense, he’s been a quarterback and a wide receiver on offense, and he’s the punter.

“He just excels wherever he’s at,” Wiggins said of Johnson. “Several weeks ago Braylon Sanders went out with an injury, and Dylan came in and played quarterback, and he’s done extremely well. He gets better each week. He’s got a confidence about him, a toughness about him that shows up on the field. I’m really proud of his leadership and the toughness he plays with on game day.”

Paving the way is an offensive line that also had to overcome a major injury.

“All those guys played well (last week against Haralson County), and they played physical, and I was really proud of their effort, and just the understanding of the plays, and staying with their blocks,” Wiggins said.

Boddie, the fullback, and tight end Michael Freeman have also been effective blockers.

“They do a great job blocking, and they’re physical,” Wiggins said. “Again, they understand their roles on Friday night.”

Callaway’s defense hasn’t been too shabby, either.

It’s a complete defense, with the defensive linemen, the linebackers and the secondary players all performing at a high level.

“The kids are playing fast, and physical,” Wiggins said. “When you do that, it gives offenses problems.”

Not to be overlooked are Callaway’s kickers, who have been getting it done as well.

Sophomore Noah Stephens has been consistent on kickoffs and field goals, and Johnson has been outstanding as the punter.

All of the players, on offense, defense and special teams, will need to be at their best if Callaway is going to find a way to upend Central-Carroll.

The Lions have been on a phenomenal run the past few seasons under head coach Rico Zackery.

The Lions reached the quarterfinals of the state playoffs in 2013, they made it to the second round a year ago, and they head into Friday’s game unbeaten and ranked fourth in the state.

The man who’ll oppose Zackery on Friday has compiled an impressive record of his own.

Wiggins took over the Callaway program in 2005.

The Cavaliers were 9-12 the first two seasons under Wiggins, but over the past nine seasons, Wiggins has a record of 80-26.

Over the past eight seasons, Callaway has won nine playoff games, and the team made it to the state semifinals in 2013.

If the Cavaliers get to 10 wins, that will mark the fifth time since 2008 that a Callaway team has reached double digits in victories.

Wiggins has coached in a bunch of big games over the years, and it never gets old.

“You look forward to these kind of games, these kind of atmospheres and situations,” Wiggins said. “It’s a whole lot of fun. It’ll be a hard-fought, physical ballgame. It’s two good teams, and two teams that believe in what they do.”

It will be a full house, it’ll be loud, and there will be two outstanding football teams putting on a great show for the fans.

“This kind of atmosphere that we’re going to have Friday night is what it’s all about,” Wiggins said.