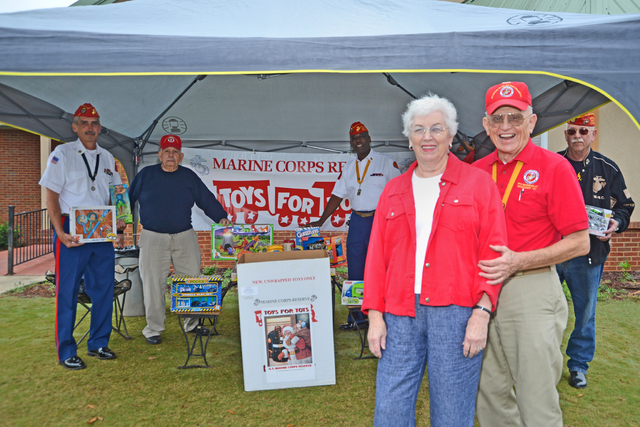 Bernard and Judy Bledsoe with members of the local Marine Corps League.

http://lagrangenews.com/wp-content/uploads/sites/37/2015/11/web1_WEB1108BenardAndJudyBledsoe.jpgBernard and Judy Bledsoe with members of the local Marine Corps League.

LaGRANGE — Thanksgiving is still on the horizon, but the 39th Annual LaGrange Christmas parade is hot on its tail.

The parade, always held the Thursday after Thanksgiving, is sponsored by the LaGrange-Troup County Chamber of Commerce. This year it will highlight holiday traditions that are a part of the American way of life, like freedom, patriotism, community spirit, family, faith and service to others.

With the theme of “Star Spangled Christmas,” the 2015 parade kicks off 6 p.m. on Dec. 3 and will be led by grand marshal Bernard Bledsoe, local coordinator for the Toys for Tots Program of the Marine Corps League PFC George Eiland Detachment 1040.

In addition to the entry fee, all participants must contribute an unwrapped child’s toy that will be distributed by Bledsoe and his team of reservists.

“I have acted as the ‘bookkeeper’ for our detachment on our Toys for Tots campaigns since the beginning,” noted Bledsoe. “Jim Sexton and Charles Waller have been equally active in leading this project, but the success of our campaigns has depended on the support and assistance of the other members and the generosity of the citizens in our community.”

“Knowing that the Empty Stocking funds of LaGrange and of Hogansville and the Salvation Army had a decades-old, proven record of identifying and serving the children of this area, we met with then-United Way Director Ruth Ellen Trotter to offer our support,” explained Bledsoe. “Our plan was, and remains, to collect toys to add to those already being obtained by these organizations so more children and families can be served.”

Parade spectators will have an opportunity to participate in the gift exchange. Volunteers for Toys for Tots will follow Santa Claus at the end of the parade and collect toys. Spectators are asked to hold the unwrapped toys until the volunteers walk by their area along the parade route. The volunteer will take the toy to the vehicles where the toys are being collected. Toys may also be dropped off at the chamber office, 111 Bull St.

“If you are a parent or grandparent and want to teach a child about the true meaning of Christmas, let the child pick out a toy to give to someone else,” Bledsoe said. “The best kind of giving is a gift to someone in need.”

Born and educated in Raleigh, North Carolina, Bledsoe joined the United States Marine Corps at 17, while still in high school. He was commissioned a second lieutenant in the U.S. Marine Corps in 1959 and served on active duty until 1964.

He spent 38 years in management and finishing operations at Milliken & Company. After 12 years in Pendleton, South Carolina, Bledsoe, his wife, Judy, and their two sons moved to LaGrange in 1977. Bledsoe served as the technical superintendent of the Live Oak Plant. He later managed the Elm City, Live Oak and Milstar plants.

Bledsoe was no stranger to community service work.

“I was active in scouting for 45 years and have worked with the local American Red Cross and United Way for years,” Bledsoe said.

Despite the accolades, Bledsoe said he does not like the spotlight.

“I have enjoyed the personal reward that I feel from being a part of the Toys for Tots campaign each year and the great relationships that I have developed,” he said. “The community and all of the members of our detachment who work so hard year after year deserve the recognition for the success of this project, not me.”

— A press release from LaGrange-Troup County Chamber of Commerce contributed to this report.