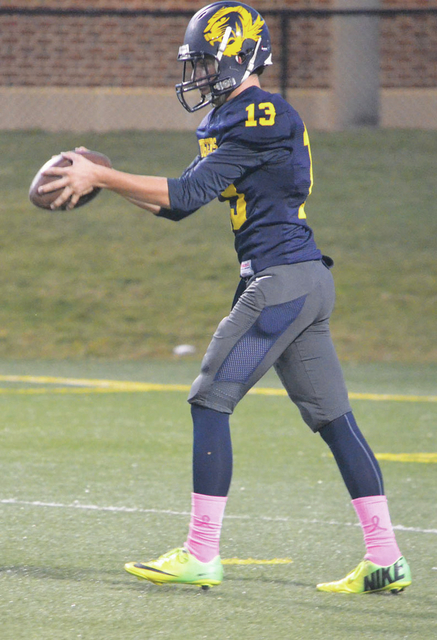 Troup head coach Tanner Glisson talks to quarterback Dexter Shealey and running back Mess Bonner during a game this season. Those three are hoping to end the season with a victory over Whitewater today. Kevin Eckleberry | Daily News

http://lagrangenews.com/wp-content/uploads/sites/37/2015/11/web1_11-6-troup1.jpgTroup head coach Tanner Glisson talks to quarterback Dexter Shealey and running back Mess Bonner during a game this season. Those three are hoping to end the season with a victory over Whitewater today. Kevin Eckleberry | Daily News Troup place kicker and punter Michael Young is one of the seniors set to play his final high-school game today against Whitewater. Kevin Eckleberry | Daily News

http://lagrangenews.com/wp-content/uploads/sites/37/2015/11/web1_11-6-troup2.jpgTroup place kicker and punter Michael Young is one of the seniors set to play his final high-school game today against Whitewater. Kevin Eckleberry | Daily News

LAGRANGE – They were so close.

In last week’s game against Fayette County, the Troup Tigers were seconds away from possibly getting their first win of the season while remaining in contention for a playoff spot in Region 5-AAAA.

With about three minutes to play, Troup’s Mess Bonner scored his fourth touchdown of the day to give his team a 35-34 lead.

That left Fayette County enough time to get in position to attempt a field goal.

Unfortunately for Troup, the kick was true, and Fayette County had a dramatic 37-35 victory.

With the win, Fayette County secured the region’s fourth and final state-playoff spot.

Troup fell to 0-9, and it’s all about playing for pride now.

Troup will try to avoid a winless season when it plays at Whitewater today.

“This week, we’re trying to get ourselves back off the mat,” Troup head coach Tanner Glisson said. “We were real disappointed after last week, and that one hurt real bad. So we’re just trying to get them up one more week.”

It was a painful loss.

The Tigers put so much into the preparation for that game, and they were so close to coming away with that first victory, and they were denied at the last moment.

“Last week,we had a good opportunity,” Glisson said. “We really feel like we had them ready to play last week. And it came down to the last couple of minutes, and they closed it out and kicked that big field goal.”

Despite everything that has gone wrong this season, Glisson said the players have come back each week and worked hard and shown tremendous focus.

“This is the first time I’m really worried about how they’re going to respond,” Glisson said. “Just because they put a lot into (last week’s game), and they were hungry. They left everything out on the field last week, and that devastated them. So, I really don’t know what to expect.”

Glisson has faith in his players, though.

“I honestly believe we can bounce back,” Glisson said. “If we can give the same type of effort we did last week, we’ve got a chance.”

It’s been a tough season for Whitewater as well.

Whitewater headed into its region schedule with a respectable 2-3 record, but it has been a rough go of it against region opponents.

Whitewater has been beaten soundly in each of its four region games, and that included a 35-0 loss to the same Fayette County team Troup nearly beat last week.

In their four region games, the Wildcats have been outscored 146-17, although they did hang with top-ranked Woodward Academy for awhile last week before losing 28-7.

Troup, meanwhile, scored more points in its region opener against Woodward Academy (a 51-21 loss) than Whitewater has scored in its four region games combined.

It was his long touchdown run late in the game, combined with Michael Young’s fifth extra point, that gave Troup a one-point lead.

For Bonner, Shealey, Young and the rest of the seniors, tonight will be the end of the road.

The players coming back, including Russell, will be able to participate in Glisson’s offseason program for the first time.

Glisson, and many of his coaches, didn’t arrive at the school until late in May, too late for spring practice.

“We’re looking forward to a full offseason,” Glisson said. “I think that will make a world of difference. We’re really tickled to death about that part of it.”