Taking a look back at a game for the ages 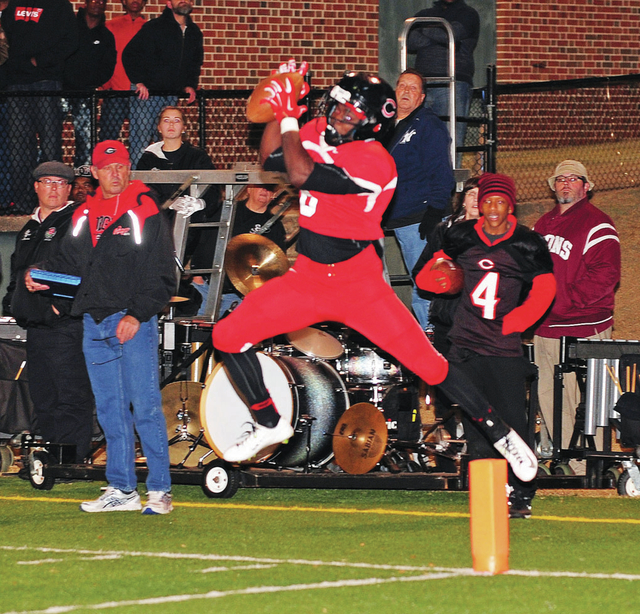 Braylon Sanders goes up to make a catch during last year’s game against Central-Carroll. Sanders, a sophomore at the time in his first season playing high-school football, had a huge night. Photo by Eddie Sherrer

http://lagrangenews.com/wp-content/uploads/sites/37/2015/11/web1_central6.jpgBraylon Sanders goes up to make a catch during last year’s game against Central-Carroll. Sanders, a sophomore at the time in his first season playing high-school football, had a huge night. Photo by Eddie Sherrer Callaway quarterback Terry Godwin, who played most of the game with a severe ankle injury, rolls out and looks for someone to pass to during last year’s game against Central-Carroll. Photo by Eddie Sherrer

http://lagrangenews.com/wp-content/uploads/sites/37/2015/11/web1_central7.jpgCallaway quarterback Terry Godwin, who played most of the game with a severe ankle injury, rolls out and looks for someone to pass to during last year’s game against Central-Carroll. Photo by Eddie Sherrer

Callaway’s Cameron Spinks attempts a field goal late in last year’s game while Central-Carroll’s Khaleel Abdusalam gets ready to make the block that led to the winning touchdown. Photo by Eddie Sherrer

http://lagrangenews.com/wp-content/uploads/sites/37/2015/11/web1_central1.jpgCallaway’s Cameron Spinks attempts a field goal late in last year’s game while Central-Carroll’s Khaleel Abdusalam gets ready to make the block that led to the winning touchdown. Photo by Eddie Sherrer Callaway’s Eddie Culpepper makes a touchdown catch late in the first half of last year’s game against Central-Carroll. Photo by Eddie Sherrer

http://lagrangenews.com/wp-content/uploads/sites/37/2015/11/web1_central5.jpgCallaway’s Eddie Culpepper makes a touchdown catch late in the first half of last year’s game against Central-Carroll. Photo by Eddie Sherrer

LAGRANGE – One year ago, not quite to the day but pretty close, Callaway and Central-Carroll got together at Callaway Stadium to determine a region championship.

It figured to be a close, hard-fought game that would come down to the closing moments, and that’s what happened.

In a fantastic game that had enough storylines to fill about 10 sports sections, it was Central-Carroll beating Callaway 40-34 after blocking a field-goal attempt as time expired and returning it for a touchdown.

Today, those two teams will meet again, and as was the case last year, they will play for the Region 5-AAA title.

It’s likely to be another memorable ballgame, but is there anyway it could possibly top last year when it comes to pure suspense?

Here’s a look back at that remarkable game from a year ago.

With a hobbled quarterback, the Callaway Cavaliers still managed to drive down the field, and get in position for a potential game-winning field goal.

Terry Godwin, who enjoyed a spectacular career as a four-year starter for the Cavaliers, suffered an ankle injury early in the game, and he wasn’t able to take advantage of his tremendous running ability.

Godwin could still throw the ball, though, and in a tie game, he led his team to the Central-Carroll 15-yard line with a few seconds remaining.

Braylon Sanders, who was undefendable that night, caught a 24-yard pass to set Callaway up at the 15, and after Godwin spiked the ball to stop the clock, the field-goal unit trotted onto the field.

The snap was fine, and so was the hold, but Central’s Khaleel Abdusalam was able to reach out and block the kick.

It was a live ball, and Central’s Dajour Riddle reached down and picked it up, and he found himself looking at an unencumbered path to the end zone.

Riddle, with a team of blockers around him, ended up going nearly 90 yards for the touchdown, giving Central a breath-taking victory.

While many of Callaway’s players collapsed on the field, stunned at the turn of events, Central’s players celebrated on the Callaway Stadium turf.

That play put an end to an amazing game filled with amazing efforts by so many players on both teams.

“Anytime you come up short after you’ve worked hard, it’s tough,” Callaway head coach Pete Wiggins said that night. “But I’m so proud of our kids for how they fought throughout the game. I’m so proud of their effort and their attitude.”

The final three minutes was a game to itself.

In that short period of time, the two teams combined for four touchdowns, three of them scored by Central.

The Cavaliers answered with a 13-yard touchdown run by Eddie Culpepper with 1:30 remaining, and the two-point conversion pass from Godwin to Sanders made it a 34-27 game.

The Lions needed less than 30 seconds to go 80 yards for another touchdown, with Terry finding Walker in the end zone from 22 yards out.

The Cavaliers got the ball for the final time with 1:04 remaining at their own 37-yard line, and they marched down the field.

The biggest play on the drive was Godwin’s 24-yard completion to Sanders.

That set the Cavaliers’ up for a 32-yard field-goal attempt, well within Spinks’ range.

Abdusalam was on the spot with the block, and Riddle did the rest.

“Coach (Rico Zackery) told us, ‘We’re going to block this kick,” and we did,” Riddle said. “Everyone was celebrating, but my mind was on the win. I wanted to go out right then and I scooped and scored. I’ve never had a feeling like this.”

Culpepper, who ran so hard that night, said he and his teammates battled to the end.

“One thing we do is never give up,” Culpepper said. “We have to keep fighting until the end, until the clock hits zero.”

In what turned out to be his final high-school game, Godwin shrugged off a severe ankle injury and did everything he could, and he said all of his teammates did the same.

“There were a lot of people that came in the game and stepped up and made big plays,” Godwin said. “It was a heart-breaker at the end. We did all we could do.”

Callaway trailed 14-0 in the first half.

In the first quarter, Central’s Rick Dyer recovered a fumble in the end zone to give his team a 7-0 lead.

In the second quarter, Central got an interception that set up Kyle Terrell’s 15-yard touchdown run, and Callaway was down by 14 points.

Then Culpepper helped spark the Cavaliers with a 61-yard touchdown run to cut the Lions’ lead to 14-7.

Then with just 23 seconds left in the half, Culpepper made a tremendous catch in the end zone on a ball thrown by Godwin, and it was tied 14-14 at the half.

After Damarious Owensby scored on an 8-yard run in the third quarter, Central’s lead was 21-14.

Late in the third quarter, Sanders caught a 26-yard scoring pass from Godwin, and after the extra-point attempt was missed, Callaway trailed 21-20.

In the fourth quarter, it was Cedric Maynard getting into the act with a 30-yard touchdown run, and after a failed two-point attempt, Callaway led 26-21.

The Cavaliers appeared to be in great shape after recovering a fumble at the 35-yard line, but they ended up missing a field goal, and the Lions got the ball back down by five.

At that point, Central’s starting quarterback, Wesley Long, was out of the game after an ejection, but Terry was up to the task.

After Callaway’s missed field goal, Central needed one play to cover 80 yards, with Terry tossing a swing pass to Walker, who beat the Callaway defense for the touchdown.

It took the Cavaliers a little more than a minute to respond with a touchdown of their own.

Godwin completed passes of eight, 17 and 10 yards to put the ball on the 13-yard line.

On the next play, Culpepper’s 13-yard touchdown run, followed by a two-point conversion pass from Godwin to Sanders, gave the Cavaliers a 34-27 lead with 1:30 to play.

In this game, 90 seconds was an eternity.

The Lions made it deep into Callaway territory on a 47-yard completion from Terry to Jacob Barnes, followed by a penalty.

From the 22-yard line, Terry threw a jump ball to Walker, who snatched the ball away from his defender for the touchdown.

Central’s ensuing kickoff went out of bounds, so Callaway began with fine field position at its own 37-yard line.

The Cavaliers went right back to work.

Culpepper got things started with a 13-yard run to midfield, and after a 7-yard pickup by Maynard, Godwin’s 9-yard keeper put the ball on the 34-yard line.

A penalty knocked the Cavaliers back to their own 39-yard line, and after an incompletion, Godwin connected with Sanders for a 24-yard completion.

The Cavaliers rushed down the field, and Godwin spiked the ball with two seconds showing on the clock.

Callaway’s field-goal unit, which had been extremely successful all season, came onto the field.

Moments later, Riddle was racing toward the end zone, breaking the hearts of the Callaway players in the process.

Wiggins said it was the leadership of Culpepper and the other seniors who made sure the Cavaliers stayed in the game, no matter what they faced.

“We talk about adversity all the time,” Wiggins said. “This group of seniors just battled, and I’m so proud of this group of men for leading the team, and showing a lot of character.”