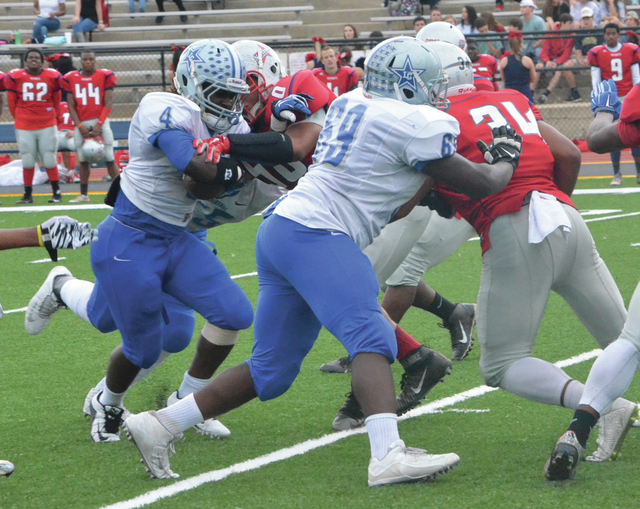 LaGrange quarterback LaPerion Perry gets a pass away during the first half. Kevin Eckleberry | Daily News

http://lagrangenews.com/wp-content/uploads/sites/37/2015/11/web1_LHS21.jpgLaGrange quarterback LaPerion Perry gets a pass away during the first half. Kevin Eckleberry | Daily News COLUMBUS – It was one of those days.

The LaGrange Grangers headed to Columbus on Saturday to face the Northside Patriots with a chance to finish second in the region and earn the right to host a state-playoff game.

An inability to hang onto the ball proved to be the Grangers’ undoing, though.

The Grangers committed eight turnovers, and they were unable to overcome those miscues on the way to a 35-23 loss at Kinnett Stadium.

The Grangers (5-5 overall) finished the regular season with a 3-3 record in Region 1-AAAAA play, and they’ll join Shaw and Columbus today in a mini-playoff at Harris County.

Two of those three teams will qualify for the state playoffs, while the third team will see its season end.

The first half was a disaster for the Grangers on Saturday.

The game began with a fumble on the opening kickoff, and the Patriots promptly scored to take a 7-0 lead.

LaGrange finished the first half with six turnovers, and not surprisingly, Northside had a 35-7 lead at the break.

The Grangers played much better in the second half and made things somewhat interesting late, but the deficit was too great.

“The guys came out focused today,” LaGrange head coach Dialleo Burks said. “I watched them. They were ready. But the first half, we weren’t here at all.”

As the fourth quarter began, the Grangers were still trailing 35-7, but they cut into the deficit on a 3-yard touchdown run by Keaote Davis and a two-point conversion run by quarterback LaPerion Perry.

With nearly eight minutes to play, the Grangers got even closer .

Perry threw a 15-yard touchdown pass to Andrew Askew, and Perry had the two-point conversion run to cut Northside’s lead to 35-23.

With less than three minutes to play, the Grangers got to the Patriots’ 20-yard line with a chance to take another bite out of the deficit, but an interception in the end zone ended the suspense.

The Grangers had won back-to-back games against Shaw and Harris County to bolster their playoff position.

In both of those games, the Grangers did a good job hanging onto the ball, and they were able to put a bunch of points on the scoreboard.

The Grangers continued to move the ball well against the Patriots, but they struggled badly in the turnover department.

After LaGrange’s first turnover, Northside went 58 yards for the touchdown, with Kalan Watts scoring on a 1-yard run.

LaGrange’s second possession ended with an interception, and that led to a Levi Dunn 14-yard touchdown pass to Watts.

The Grangers got into scoring position on their third possession, but they came away empty after a bad snap on a field-goal attempt.

Back came the Patriots, with Watts scoring on a 34-yard run to give his team a 21-0 lead, which was the score after the first quarter.

Another interception gave the ball back to the Patriots, and Dunn’s 4-yard keeper put the Grangers in a 28-0 hole with 10:02 left in the first half.

When they got the ball back, the Grangers finally put together a clean drive, and they went 80 yards for their first touchdown.

One play after he had a 44-yard run, Perry came through with an 8-yard touchdown run to put the Grangers on the board.

Matthew Thomas made the extra point, and LaGrange trailed 28-7.

The Grangers turned the ball over twice more in the second quarter, though, and after a fumble, Watts had a 1-yard touchdown run, and the Patriots were ahead 35-7 at the half.

In the third quarter, LaGrange’s defense came out firing.

The Patriots had three-and-outs on their first two possessions of the second half, but the Grangers couldn’t take advantage of that.

Twice LaGrange made it into Northside territory before giving the ball back following failed fourth-down plays.

After the defense forced another punt, LaGrange’s offense struck paydirt.

The Grangers went 71 yards in eight plays, and Undriel Copeland covered 49 of those yards with a third-down carry.

After Northside was stopped on a fourth-down play, LaGrange went 66 yards in seven plays for another touchdown.

On third down, Perry had a 23-yard run to the Northside 15-yard line.

On the next play, Perry found Askew for a 15-yard touchdown pass, and after the two-point conversion, Northside led by 12 points with 7:58 remaining.

LaGrange got the ball a few minutes later, and they made it to the 20-yard line before an interception ended the threat.

Northside gave the ball right back on a fumble with 3:02 to play, so LaGrange still had life.

Any chance the Grangers had of completing the comeback ended with yet another interception, and the Patriots were able to run out the clock.