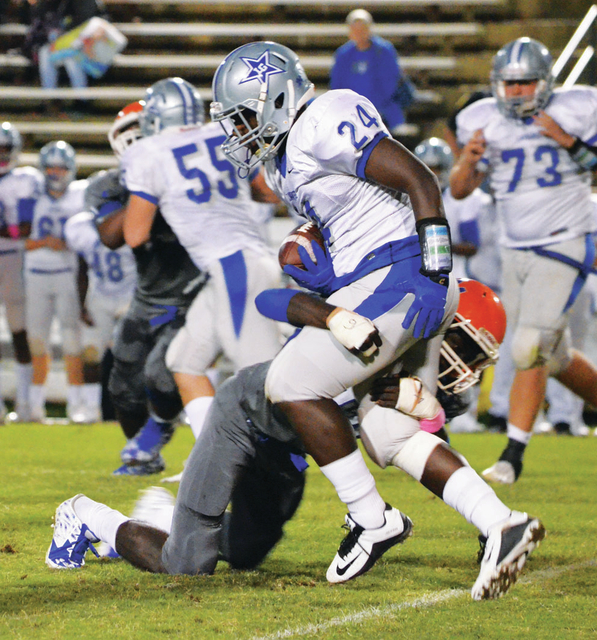 LaGrange’s Kimani Barnes is brought down by a Columbus defender during a game this season. LaGrange, Columbus and Shaw will have a mini-playoff on Monday to determine the final two playoff teams from Region 1-AAAAA. Kevin Eckleberry | Daily News

http://lagrangenews.com/wp-content/uploads/sites/37/2015/11/web1_Barnes.jpgLaGrange’s Kimani Barnes is brought down by a Columbus defender during a game this season. LaGrange, Columbus and Shaw will have a mini-playoff on Monday to determine the final two playoff teams from Region 1-AAAAA. Kevin Eckleberry | Daily News

LAGRANGE – So it comes down to this for the LaGrange Grangers.

After 10 games, including Saturday’s 35-23 loss to the Northside Patriots to end the regular season, LaGrange’s playoff fate is still up in the air.

There are three teams tied for third place in Region 1-AAAAA, and they will get together at Harris County’s stadium for a mini-playoff on Monday at 6:30 p.m.

Carver and Northside have secured two of the region’s state-playoff berths, and LaGrange, Shaw and Columbus will compete for the final two playoff spots.

LaGrange, Shaw and Columbus each finished with a 3-3 record in region play.

The head-to-head tie-breaker doesn’t apply, since those teams went 1-1 against each other.

So the region’s final two playoff representatives will be determined by the mini-playoff.

The games will be 10 minutes long, with two five-minute halves, and two minutes for a halftime break.

If any of the games ends in a tie, normal tie-breaker rules will apply.

In the first game today, it will be Shaw taking on Columbus.

The winner of that game will be assured of a state-playoff berth, while the loser will take on LaGrange in the second game.

The winner of the second game will also be guaranteed a playoff spot, while the season will be over for the loser.

Shaw and Columbus could both lose a game and still to make the playoffs, while LaGrange will face the pressure of a win-or-go-home scenario in its first game.

The team that finishes third will travel to Northgate, and the fourth-seeded team will visit Stockbridge.

LaGrange had close games with Shaw and Columbus during the regular season.

Against Columbus, LaGrange trailed 14-0 through three quarters, but it made a game of it late before losing 21-13

In the Shaw game, LaGrange held on for a 35-28 victory after making a goal-line stand on the game’s final play.

LaGrange could have avoided the mini-playoff by beating Northside on Saturday to finish second in the region, but it didn’t happen.

LaGrange head coach Dialleo Burks said he isn’t concerned with his players being able to turn the page.

“I don’t worry about our guys at this point,” Burks said. “First place is done, second place is done, but we still get to fight to go and accomplish our goals. That’s what we have to focus on as a team.”

FORMAT: Teams will play two five-minute halves, with a two-minute halftime break. If the games are tied at the end of regulation, normal overtime rules will apply.

Game 2 – Shaw/Columbus loser vs. LaGrange (winner will qualify for state playoffs, and season ends for loser)