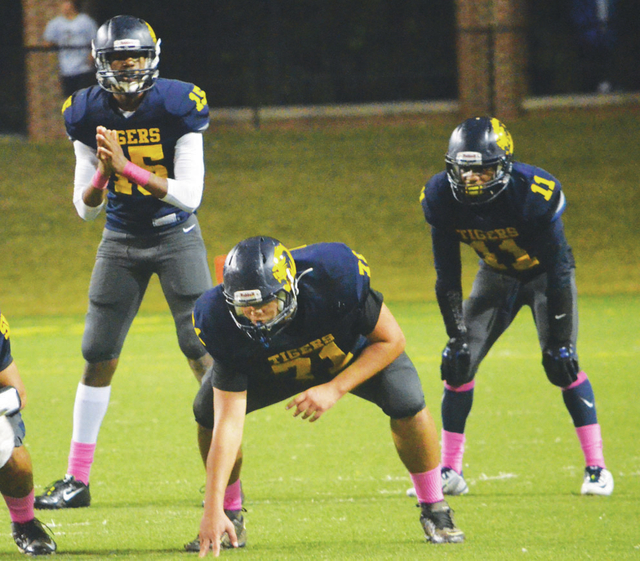 Troup quarterback Montez Crowe takes a snap during a game this season with Mess Bonner lined up beside him. Crowe and Bonner combined for four touchdown runs in Friday’s 28-0 win over Whitewater. Kevin Eckleberry | Daily News

http://lagrangenews.com/wp-content/uploads/sites/37/2015/11/web1_troup.jpgTroup quarterback Montez Crowe takes a snap during a game this season with Mess Bonner lined up beside him. Crowe and Bonner combined for four touchdown runs in Friday’s 28-0 win over Whitewater. Kevin Eckleberry | Daily News

The Troup Tigers went out in style.

Facing Whitewater in their season finale on Friday, the Tigers got three touchdown runs from senior Mess Bonner on the way to a 28-0 victory.

The Tigers came into the game with an 0-9 record, so they needed a win to avoid a winless season, and they made it happen.

The game was called with about six minutes remaining because of severe weather in the area.

Bonner wrapped up his stellar high-school career with a big night.

Bonner had touchdown runs of 65 yards, 42 yards and one yard in the first half as the Tigers built a 21-0 lead.

In the second half, sophomore quarterback Montez Crowe scored his first varsity touchdown on a short run, and Michael Young made his fourth extra point to push the lead to 28-0.

In a one-sided game, when lightning was spotted nearby, the decision was made to end the game.

LAFAYETTE CHRISTIAN: The Cougars tuned up for the state playoffs with a 69-18 road win over Ballard Christian (Ala.) on Friday.

The Cougars finished the regular season with a 7-3 record, and they’re one of eight teams that will participate in the Georgia Independent Christian Athletic Association eight-man state playoffs that get under way this week.

The Cougars reached the state semifinals the past two seasons.

Two weeks after a dramatic 35-34 win over Holy Ground that secured a state-playoff berth, Lafayette Christian returned from an off week to play Ballard.

He had four interceptions, and he returned two of them for touchdowns.

Reed also had a punt return for a touchdown, as well as a long scoring run.

The Cougars led 62-6 at the half, and there was a running clock in the second half.