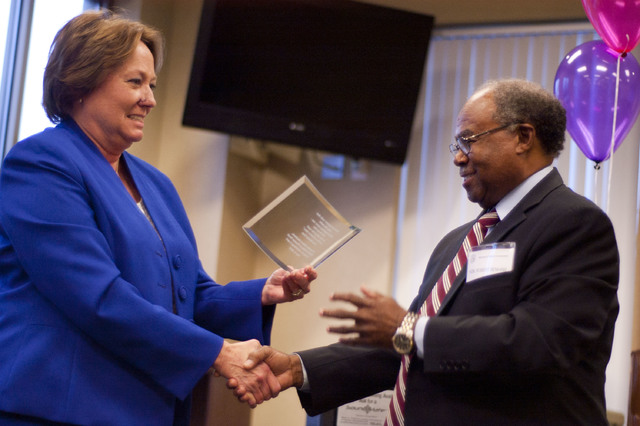 LaGRANGE — A Georgia Supreme Court justice praised Troup County for its progressive efforts with the DUI/Drug Court recently at the Troup County courthouse and encouraged graduates to find their salvation in support from others.

Benham, who helped start the drug courts in Georgia along with Troup County State Court Judge Jeannette Little, lauded the importance of the court system and changing the perception from one of punishment to one of reform.

Benham said that for every dollar spent on the drug court program in Troup County, it saves $27 compared to the traditional court system. The impact and cost of locking up repeat offenders, and the ripple effect of their drug abuse creates more cost to the courts, and thereby the taxpayers, he said.

“It makes good economical sense, because when a person is on drugs, his family is affected,” he said. “You will see them at the emergency room for domestic violence. You will see the children in juvenile court for disruptive conduct. They will be absent from school, and you will see them in the public assistance line. And over time they will cost us hundreds of thousands of dollars to treat the consequences of drug abuse.”

The drug court program also has spun off other courts aimed at helping change offenders instead of locking them up. He noted there are now also mental health and veterans courts.

“I had a veteran in court who was homeless, and I said, ‘You’ve served your country, how is it that your in jail? What have you done?’” Benham recounted. “He said, ‘Well, I have a drug problem. I was traumatized in the war, and when I was arrested — especially on cold nights, I wait to get arrested. They take me and they put me in the jail, and they think that they have punished me.’

“He said, ‘I have slept with snakes in Vietnam. I’ve slept in mud holes. I’ve slept in ditches. I’ve slept in foxholes, and if they think they’re punishing me by putting me in a jail cell with a warm blanket and a comfortable place to sleep — that’s not punishment, that gives me a place to get some rest so I can get my next fix.’”

The programs are effective because they “take people as they are and move them to where they need to be,” Benham said.

“Because no matter what their circumstances are, they are our neighbors, and we have an obligation to see after our neighbors.”

“So, we’re proud of what you have done. We’re proud of what this community has done,” he said. “Every court in Georgia has not seen fit to have drug courts and juvenile courts, but you, in this community — you have decided to salvage your fellow citizens instead of incarcerate your fellow citizens. And in doing so, you have not only improved your community, you have lightened the load in your pocket and salvaged your neighbors.”

He then turned to the graduates and congratulated them for their work getting through the program and reminded all attendees that support is integral to continuing the success.

“Now, as you go forth from this program, I encourage you to create a better system. Your salvation in terms of substance abuse is like swimming in water every day of the week. If you swim, you’re told you need to have a buddy or else you go down. The same is true for substance abuse, you need to have a buddy. Because you can’t do it by yourself. … If you do (accept support), chances are that you will have a successful and rewarding life.”

More than just a name