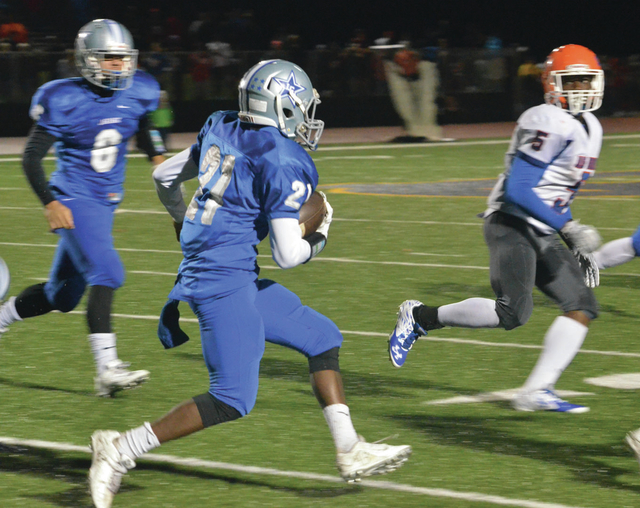 LaGrange’s Enrique Moody waits for a pass to come down late in the second half of Monday’s game. Columbus clinched the victory with an interception. Kevin Eckleberry | Daily News

http://lagrangenews.com/wp-content/uploads/sites/37/2015/11/web1_11-10-LHS4.jpgLaGrange’s Enrique Moody waits for a pass to come down late in the second half of Monday’s game. Columbus clinched the victory with an interception. Kevin Eckleberry | Daily News HAMILTON – It all came down to 10 minutes.

The LaGrange Grangers held their first official practice nearly four months ago, and the preparation for a new season began way before that.

On Monday evening at Harris County’s football stadium, LaGrange had 10 minutes to try to keep its season alive.

LaGrange, Shaw and Columbus finished the regular season tied for third place in Region 1-AAAAA, and those three teams got together on Monday for a mini-playoff.

Shaw and Columbus played first, with Shaw getting a touchdown in overtime to win it.

Then it was LaGrange’s turn to take the field, and the opponent was Columbus.

It was a 10-minute game, with two five-minute halves and a halftime break of two minutes.

It was a do-or-die game for the Grangers.

A win would send them to the state playoffs, while a loss would mean the end of the season.

Unfortunately for the Grangers, it wasn’t meant to be.

Playing without star quarterback LaPerion Perry, who was out with an injury, LaGrange ended up falling to Columbus 7-0.

Columbus took advantage of an early LaGrange fumble to score a touchdown in the first five-minute half, and that was the difference.

Columbus and Shaw have qualified for the state playoffs, while LaGrange’s season ended with a 5-5 record.

It was a tough few days for the Grangers.

They headed into Saturday’s game against Northside with a chance to finish second in the region and host a playoff game, and now they’ll be on the outside looking in when the state tournament gets under way.

“We’re going to come back to work, and analyze everything, and look at the whole season,” LaGrange head coach Dialleo Burks.

For the players coming back, Burks hopes they learn from all of the close games they were involved in this season.

For the seniors, Burks wishes them nothing but the best, and he hopes they exit the program prepared to face life after high school.

Not having Perry for Monday’s game was a major blow.

The junior had a phenomenal season, and being without a play-maker of his ability greatly hurt the Grangers’ chances.

Senior Andrew Askew didn’t have a whole lot of time to prepare to step in at quarterback, and he and his offensive teammates only had three possessions to get something done.

“We were plagued by injuries the whole season,” Burks said. “But the way we prepare guys is to step in and step up. They’ve accepted the challenge. We’ve had some guys in those spots. But, it’s tough when you have one day to get stuff done.”

The Grangers had the ball first with a chance to take control, but a lost fumble on second down gave the ball to the Blue Devils at the 26-yard line.

On its second possession, LaGrange moved the ball.

Askew had a 17-yard keeper on first down, and he followed that up with a 14-yard completion to Enrique Moody to put the ball on the Columbus 38-yard line.

The drive stalled at that point, though, and the half ended on an incomplete pass on fourth down.

Columbus got the ball first to start the second half, and it looked like it was going to run the clock out.

The Blue Devils marched down the field, and they had the ball deep in Granger territory with a little more than a minute left.

The Grangers likely needed a turnover to have any chance, and they got one.

A fumble gave the ball to the Grangers on their own 24-yard line with 1:15 to play.

After two incompletions, Askew took off running on third down, and he made it all the way to the Columbus 49-yard line.

A 5-yard completion to Derieko Smith and a Columbus penalty gave LaGrange the ball at the 39-yard line, with just enough time for a few more plays.

The Columbus defense was up to the task.

Askew threw the ball toward the end zone, and it was Trynten Hall coming down with the interception to seal the Grangers’ fate.

Columbus ran one kneel-down play, and that was that.

It was a huge win for Columbus, which is returning to the state playoffs for the first time in more than 20 years.

In Monday’s first game, Columbus and Shaw were scoreless at the close of regulation.

Columbus made a field goal on its first overtime possession, but Shaw answered with a touchdown to win it.