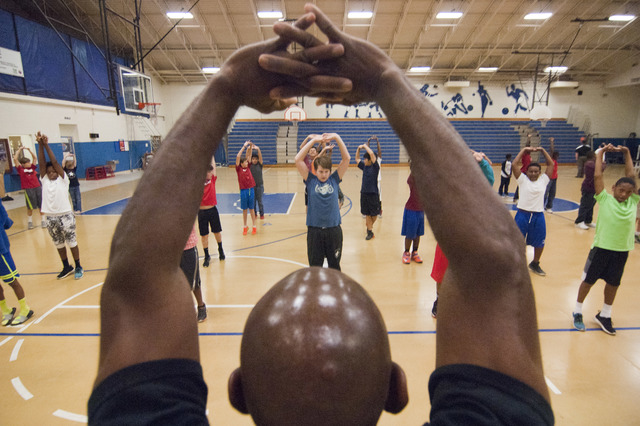 Michael Woodard, a retired National Guard 1st sergeant and athletic director at Gardner Newman Middle School, passes out balls before a dodgeball game Tuesday at the school. Woodard served 35 years in the guard before retiring in March.

http://lagrangenews.com/wp-content/uploads/sites/37/2015/11/web1_Woodard01.jpgMichael Woodard, a retired National Guard 1st sergeant and athletic director at Gardner Newman Middle School, passes out balls before a dodgeball game Tuesday at the school. Woodard served 35 years in the guard before retiring in March. Michael Woodard puts down cones before a game Tuesday at at Gardner Newman Middle School.

http://lagrangenews.com/wp-content/uploads/sites/37/2015/11/web1_Woodard03.jpgMichael Woodard puts down cones before a game Tuesday at at Gardner Newman Middle School. Students at Gardner Newman Middle School roll up an exercise mat before heading outside for a run Tuesday at the school during Athletic Director Micheal Woodard’s physical education class.

http://lagrangenews.com/wp-content/uploads/sites/37/2015/11/web1_Woodard07.jpgStudents at Gardner Newman Middle School roll up an exercise mat before heading outside for a run Tuesday at the school during Athletic Director Micheal Woodard’s physical education class. LaGRANGE — In his 35 years with the National Guard, retired 1st Sgt. Michael Woodard, 60, of LaGrange served with several units and traveled halfway across the globe.

He was in New Orleans after Hurricane Katrina and Kuwait during the Iraq war in 2006. He met former Secretary of State Colin Powell and guarded Air Force One when Bill Clinton was president. The frequent deployments and training were tough on his family. He missed many of his two sons’ birthdays and sporting events, but if he could, he’d still go back and do it all again.

Woodard, who retired from the guard in March, knows what it means to serve. He continues that service every school day at Gardner Newman Middle School, but has traded his rifle for a coach’s whistle.

“Sometimes I honestly can’t say why I serve,” he said Tuesday as he oversaw a game of dodgeball. “I love it, and I’ve done it so long now. I tell people you don’t get rich teaching, but you do it for the love of the kids. Somebody’s got to do it and get these kids to where they need to be.”

For more than three decades, Woodard has worked with the school system — since the school opened, he’s been at Gardner Newman and is the athletic director.

“This is something I wanted to do,” he said. “When I first went into college, I didn’t really declare a major, but I’ve always grown up around sports, and I like sports. For some reason, teaching became a knack for me and that’s what sparked it.”

Before he made the decision to become a teacher, though, Woodard made an even tougher choice.

“After high school, I worked part time at Miliken,” he said. “There was a guy in the break room and he asked me if I’d ever thought about joining the National Guard.”

It wasn’t long after that — in 1980 — that Woodard enlisted. He went to boot camp at Fort Leonard Wood in Missouri, where he said he excelled.

“I’ll tell you what really sticks out in my mind: a lot of kids really seemed to struggle,” he said. “When I went into boot camp, I guess my athleticism and being involved in sports made it a breeze for me. I went in and maxed out my (physical training) test, rifle qualifications and all of that stuff. It was just easy for me. Being able to do that, you got first choice in everything … in lines, in chow hall and such.”

Woodard’s perspective on his service in the National Guard changed over the years as he progressed in rank, he said.

“I’m going to be honest with you, when I first started as a young private, I didn’t have a lot of thoughts about why I was doing it,” he said. “I think the initial thought was that I could make some money and I would get free schooling. That was the two reasons I went at the time when I was a young kid. As I got older and grew into it, and I began to get rank, I started to get a new perspective, and that was to protect this homeland in time of war, or any time the country needed to be defended. I’m here to be called on.”

Perhaps one of Woodard’s most vivid memories of his time in the National Guard isn’t from a war zone — although it may have resembled one.

“My Katrina experience was probably one of the things I’ll never forget,” he said.

In 2005, Woodard and a cadre of guard members went to New Orleans as part of a transportation unit to bring in supplies to stranded victims.

His normally chipper voice dropped in volume and his tone became more somber as he recalled his month-long mission to the Crescent City.

“It was a disaster like I’ve never seen,” he said. “It was unbelievable the suffering people went through, the disaster. You name it, we saw it. You saw dead bodies and the stench and filth and unsanitation. We were stationed in tents and we were used to it, but to see the civilians suffering the way they suffered, it was awful.”

Woodard and his fellow guard members worked day and night to distribute food, water, blankets and medical supplies to people spread out across the flooded city.

“We were transporting MREs (meals ready to eat), bottled water, blankets and whatever supplies we could get to them,” he recalled. “There were people cut off in remote areas and we had to get in and get them medical supplies and things.”

The deployment was a challenge, Woodard said, but he stayed true to his mission and service.

“I think service is a natural God gift that I have,” he said. “I don’t mind serving anybody. Like they say, ‘do unto others as you’d have them do unto you.’ Service is just what I do, and you can’t put a money figure on serving. I cherish it, I really do.”

It’s that same spirit that Woodard brings to the middle school every day as a coach.

“This is something I can do to give back to my community,” he said. “I’m all for the underdog, and that’s why I’ve been in this for so long.”

As for the students he leads in exercise day in and day out, he hopes to impact them positively and would even recommend service in the military if they graduate high school and aren’t sure what to do next.

“I would recommend military service for some people,” he said. “If you’re just coming out of high school and you’re not sure what you want to do this is a great stepping stone. You get a pay check and military offers you a free education. For anybody who’s just starting out and not sure what they want to do, I would highly recommend it. It teaches you discipline and so many other things that you can get out of the military.”

Maybe even some of his students will become coaches like himself — after all, there’s going to be a job opening soon, he said.

“People look at me and want to know why I’m still doing this. It’s sort of like a way of life for me. I’m about to retire from here in a year or so after almost 32 years with the school system,” he said. “I’m getting ready to start another phase of my life. I don’t know what I’ll do yet, but I’ll figure out what I’m going to do.”

‘You can’t do it by yourself’ — State court…