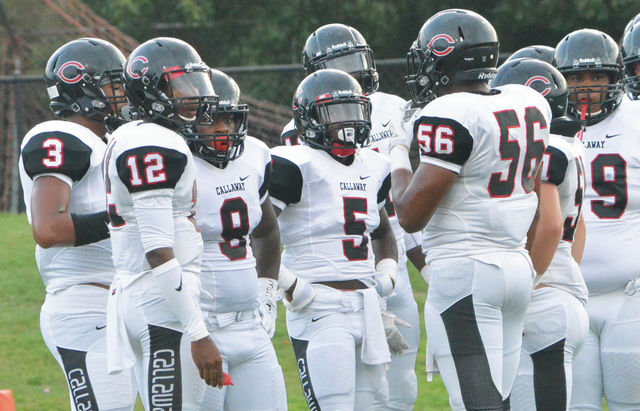 JT Wortham (10), Javoski Leverette (14) and the rest of the Callaway defense came up with a huge stop late in Friday’s victory over Central-Carroll in the region-championship game. Kevin Eckleberry | Daily News

http://lagrangenews.com/wp-content/uploads/sites/37/2015/11/web1_wortham2.jpgJT Wortham (10), Javoski Leverette (14) and the rest of the Callaway defense came up with a huge stop late in Friday’s victory over Central-Carroll in the region-championship game. Kevin Eckleberry | Daily News Callaway quarterback Dylan Johnson had two touchdown runs against Central-Carroll, including the game-winner late in the fourth quarter. Photo by Eddie Sherrer

http://lagrangenews.com/wp-content/uploads/sites/37/2015/11/web1_CHS21.jpgCallaway quarterback Dylan Johnson had two touchdown runs against Central-Carroll, including the game-winner late in the fourth quarter. Photo by Eddie Sherrer Callaway’s Cedric Maynard had a 71-yard run that set up the go-ahead touchdown in the fourth quarter. Photo by Eddie Sherrer

http://lagrangenews.com/wp-content/uploads/sites/37/2015/11/web1_CHS1.jpgCallaway’s Cedric Maynard had a 71-yard run that set up the go-ahead touchdown in the fourth quarter. Photo by Eddie Sherrer

At the end of a hard-fought, close game, there are always a few plays that will determine the outcome.

The team that makes those plays, that comes up with the goods, that stands up to the pressure of the moment, is the one that walks away with the win.

On Friday, it was the Callaway Cavaliers making those winning plays at the end of the Region 5-AAA championship game against Central-Carroll.

Callaway’s defense made a massive stop on fourth down late in the fourth quarter of a game that was tied 14-14.

That stop came with Central-Carroll driving deep in Callaway territory, and a first down would have been huge at that point.

Callaway’s offense responded with a 76-yard touchdown drive that began with a 71-yard run by Cedric Maynard, and ended with a 6-yard scoring run by Dylan Johnson.

Senior linebacker Dre Martin then made an interception that ended the suspense, and Callaway had a 21-14 victory and a region title.

It was a game between two outstanding teams that had won a combined 19 straight games this season, and it came down to those plays at the end of the game.

In the first half, Callaway seemed to be in control, and it looked like there may not be any late suspense.

In the first quarter, the Cavaliers had a 60-yard touchdown drive that was capped by a 2-yard scoring run by Johnson.

Then in the second quarter, Maynard scored his 22nd touchdown of this season, with this one covering 29 yards.

When Noah Stephens made the second of his three extra-point attempts, Callaway led 14-0 with 4:27 left in the first half.

The game was a long way from over, though.

The Lions came into the game with 21 consecutive regular-season wins, and a team doesn’t have that kind of success by accident.

The Lions fought back.

Jaleel Terry had a 13-yard touchdown run late in the first half to cut Callaway’s lead to 14-7.

Then late in the third quarter, Terry tossed a 71-yard touchdown pass to Byron Brown, and the game was tied 14-14.

From there, the teams exchanged punts a few times.

After a Callaway punt midway through the fourth quarter, Central had the ball at midfield, with a chance to drive for the winning score.

After getting a couple of first downs, the Lions found themselves facing a fourth-and-three situation from the Cavaliers’ 23-yard line.

Central head coach Rico Zackery called a timeout, and rather than attempt a long field goal, he sent the offense back onto the field.

It was winning time.

Which team was going to make a play?

Martin said during the timeout, the message from the coaches was to make “one more play.”

“We needed to make one more play, give our offense one more chance,” Martin said.

Callaway defensive lineman Rashawn Lovelace said defensive coordinator Dusty Hubbard “was just telling us to keep contain on them, make sure they don’t get to the outside and beat us on the big plays they’d been beating us on, and to just keep our heads up.”

Senior defensive back Tyrek Frazier said the players knew it was the most important play of the game.

The Cavaliers made it happen.

Central’s running play was stuffed, and Callaway had the ball with a chance to drive for the winning score.

“We talk about adversity all the time,” Callaway head coach Pete Wiggins said. “Our backs were against the wall, and these kids made a stand. I’m so proud of them.”

As critical as that stop was, a Callaway offense that hadn’t done much in the second half had to do its part.

Since his touchdown run in the second quarter, Maynard had only managed three yards against Central’s stout defense.

When winning time arrived, though, Maynard wasn’t going to be stopped.

The offensive line gave Maynard a hole to run through, and he was gone.

Maynard was unable to take it the distance, but he made it to the 5-yard line before getting tackled, and the Cavaliers were that close to taking the lead.

After Maynard was stopped for a 1-yard loss on first down, Callaway offensive Matt Napier sent in the play, and it was a designed quarterback run.

With Central’s defense focused on stopping Maynard, Johnson was able to get outside with a clear path to the end zone, and with the help of some key blocks, he scored the go-ahead touchdown.

“I had to do everything I could to get in,” Johnson said. “I had a great block on the outside by Joe (Brown). It opened up a free lane.”

The Cavaliers had the lead, but the game wasn’t over.

A few plays later, it was.

On Central’s ensuing possession, defensive lineman JT Wortham made a sack on first down, and two plays after that, Martin’s interception on third-and-long all but ended the suspense.

Maynard delivered one final dagger with a 14-yard run for a first down, and that was that.

The Cavaliers lined up in the victory formation, Johnson kneeled down, and the game was over.

Because the Cavaliers came through when it mattered most, they were region champs.

“These guys, we’re a big family, and I love every one of them,” Wiggins said. “And it’s such a special time for these young men.”

The victory was especially sweet for the Cavaliers considering what happened a year ago.

In the final game of the 2014 regular season, Central-Carroll blocked a field-goal attempt as time expired and returned the ball for a touchdown to win 40-34 and capture the region title.

Johnson said that play was very much on the minds of the Callaway players leading up to the game.

Johnson said when the players reviewed the game film from last year’s game, it began with the final play.

“It means a lot after last year,” Johnson said. “That’s all we thought about the whole week. We were preparing to win week by week. When we got to this game, all we could think about was last year.”

It helped that the Cavaliers had Maynard on their side.

Central’s defense was the best Callaway faced all season, and Maynard still averaged more than seven yards per carry.

“They played Cedric better than any other team we’ve played this year, and he still lit it up,” Johnson said. “It’s unbelievable.”

Johnson also did his part with two touchdown runs, and the offensive line held its own against Central-Carroll’s formidable defensive front.

“Central’s got a great football team,” Wiggins said. “Their defense is so strong, and I’m so proud of our offensive line, and (tight end) Mike Freeman and (fullback) Brandon Boddie to go along with them.”

Callaway’s defense was led by Wortham, who had nine tackles, including two sacks, and linebacker Javoski Leverette added seven tackles.

Frazier had seven tackles from his defensive-back position, and Martin had five tackles with an interception.

“We knew it was a big game coming in,” Frazier said. “We knew it was for playoff seeding. We fought tough, we had adversity, and we fought through it and got the win. I’m proud.”