Construction on schedule for new District 4 office in downtown LaGrange 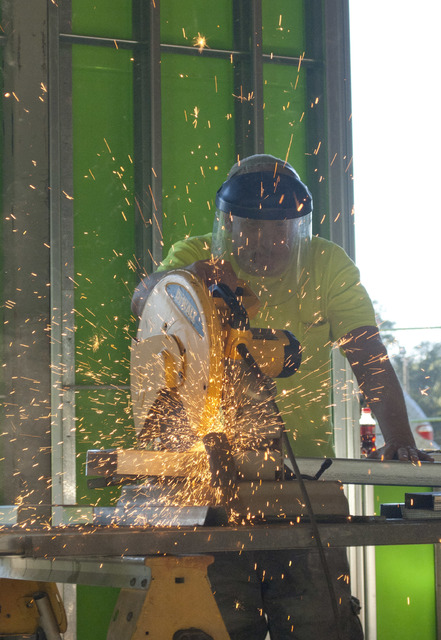 A worker cuts metal framing Tuesday at the construction site of the future District 4 Public Health headquarters on Main Street. The 14,100 square foot building is set to open in spring 2016.

http://lagrangenews.com/wp-content/uploads/sites/37/2015/11/web1_DistrictFour011.jpgA worker cuts metal framing Tuesday at the construction site of the future District 4 Public Health headquarters on Main Street. The 14,100 square foot building is set to open in spring 2016.

LaGRANGE — Construction of the new District 4 Public Health headquarters downtown is on budget and ahead of schedule, according to the project’s architect.

When it opens in spring 2016, the $3.6 million, 14,100 square foot facility on Main Street will house 50 regional administrators who oversee health departments and other services in 12 counties in west and central Georgia.

Obasanjo, Brigid Smith and Skip Smith (no relation) sat down Tuesday to discuss finishing touches and tour the building before Obasanjo, an Army reservist, deploys for 90 days overseas.

In Obasanjo’s absence, Brigid Smith will step in and help Skip Smith and other designers decide on carpets, furniture and other last-minute selections.

The building’s design will allow for future growth, Skip Smith said. About 3,000 square feet of porch space wraps around the two far ends of the building and can be enclosed at a later date if the district needs the space, he said.

Soon, builders will begin laying the brickwork on the outside of the building and putting the roofing in place. The building is designed to bear a similarity to other red-brick buildings in LaGrange. Specifically, it was modeled after the Coleman Library on Dallis Street, Skip Smith said. The roofing will be a light green color, similar to the color of weathered copper, he said.

Like most office buildings, the new structure will have space for a waiting room, cubicles, offices and conference rooms — but some features are unique because of District 4 Public Health’s specialized mission.

A ham radio antenna will be outfitted to the side of the building for use by emergency responders in the event of catastrophic disaster. The radio will enable a control room in the building to communicate with other state, federal and local agencies to coordinate disaster response, Obasanjo said.

The building and land are owned by the Downtown LaGrange Development Authority, and the state has signed a 20-year lease, Skip Smith said. The Callaway Foundation provided a $1.2 million grant to support the construction, plus the value of the land and financial assistance in demolishing the former fire station that stood in the location.