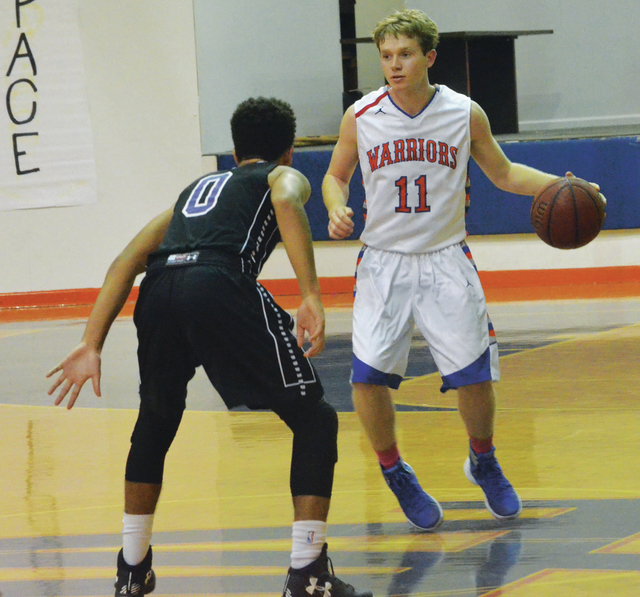 LaGrange Academy’s Whit Moreman gets a shot away during the second half of Tuesday’s 67-60 victory over Trinity Christian. Moreman scored 23 points. Kevin Eckleberry | Daily News

http://lagrangenews.com/wp-content/uploads/sites/37/2015/11/web1_11-11-LGA3.jpgLaGrange Academy’s Whit Moreman gets a shot away during the second half of Tuesday’s 67-60 victory over Trinity Christian. Moreman scored 23 points. Kevin Eckleberry | Daily News LAGRANGE – A LaGrange Academy lead that was in double digits early in the fourth period had shrunk to almost nothing.

A strong Trinity Christian team that is expected to compete for a state championship this season had whittled what was an 11-point deficit down to two with nearly two minutes left in the game.

The Warriors needed someone to step up and make a play, to do something to put momentum back on the side of the home team.

Whit Moreman was the man to do it.

The 6-foot-9 senior got the ball in the paint, and even though he had two defenders on him, he found a way to get a shot away, and the ball fell into the net to give the Warriors a four-point lead.

That basket began a game-ending 7-2 run for the Warriors, who kicked off their season with a big 67-60 victory over an elite team.

Moreman led the Warriors with 23 points, and he scored 13 of those points in the fourth period.

Lincoln Anderson, who transferred from Callaway High, made his debut for the Warriors with 19 points, and Will Trotter and Colby Heath added eight and seven points, respectively.

“This is what we wanted to do, start off with a strong opponent,” LaGrange Academy head coach Britt Gaylor said. “Trinity is going to compete for a state title. It’s always a tough game for us. It was a great way to start off.”

After Trinity Christian made its run to get within two with 1:54 to play, Moreman made his 11th and biggest basket of the night.

Gaylor said the basket showed how much progress Moreman has made as an offensive player.

“He made a great up and under move,” Gaylor said. “That’s something we’ve worked on all offseason. He went and made a bucket when we needed him to. That’s what we needed.”

Anderson, a 6-foot-5 junior who was a part of Callaway teams that reached the state quarterfinals the past two seasons, looked right at home wearing the LaGrange Academy colors.

With a bunch of his former school-mates from Callaway in attendance, Anderson was a force in the interior, and he also showed off his shooting touch by making a 3-pointer in the third quarter.

Heath, who made a pair of 3-pointers, said Anderson is the missing piece for a team hopeful of putting together a special season.

“With the new guy Lincoln coming in, he’s a big factor for the team,” Heath said. “With him coming in, I think it has completed the team.”

Gaylor said Anderson looked a lot more at ease with his new team as the game went along.

“I think you saw from the first quarter on, he got comfortable with the guys,” Gaylor said. “We just got better and better, and I think that’s going to happen throughout the year. They showed great team chemistry. It’s going to be good.”

Tuesday’s game was tied 9-9 after the first quarter, and the Warriors took charge in the second period to seize a 29-22 lead at the half.

The Warriors led by as many as nine points early in the second half, but that lead was down to three points when Heath connected for his second 3-pointer of the third period.

Both of Heath’s 3-pointers came after Trinity Christian had put together a run to get close.

“Colby knocking down those shots was huge, and he took care of the ball,” Gaylor said. “That was big.”

By the close of the third period, the Warriors were ahead 44-36.

When Moreman scored in the first minute of the fourth period, the Warriors were ahead by 10 points, and they were still up by 10 with five minutes to play.

When Julian Warner made a 3-pointer with 2:25 to play, LaGrange Academy’s lead was down to three points.

Warner then made a pair of free throws with 1:54 remaining, and Trinity Christian was within two.

Moreman answered with his big basket moments later, and the Warriors were finally able to put it away.

Trotter and Anderson both made some key free throws in the final minute.

Heath said having a hard-fought game was a great way to jump into a new season.

“That way, we can really see where we are as a team, and how we play together, see how our practices have paid off,” Heath said.