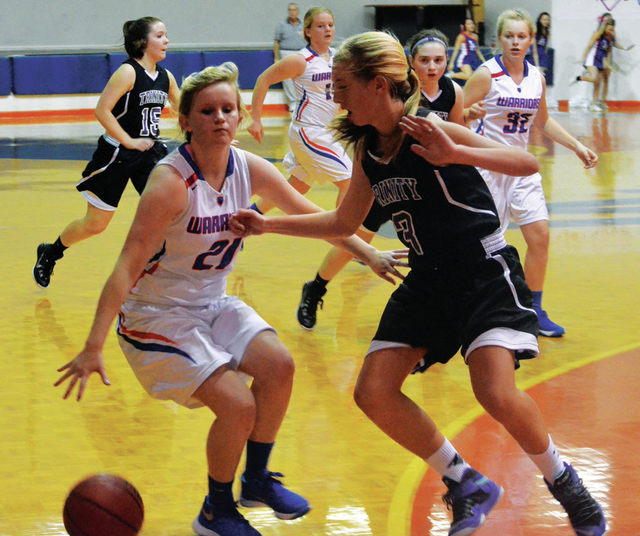 LAGRANGE – The LaGrange Academy girls’ basketball team that won a region championship and reached the second round of the GISA state tournament last season was a veteran one, with five talented seniors leading the way.

The LaGrange Academy team that stepped onto the court for Tuesday’s season opener against Trinity Christian had a slightly different look to it.

It’s a team with very little experience, with nearly everyone of the players getting her first significant taste of varsity action.

Facing a veteran and strong Trinity Christian team, it was a tough night for LaGrange Academy, which lost 69-10.

While head coach Mike Petite said the players have worked hard during practice, nothing can simulate an actual game, so he’s glad the players now have that experience under their belts.

“Now, they understand what they have to do in practice tomorrow,” Petite said. “We’ve had three weeks of practice, and we’ve had good practices and they’re relatively intense, and the girls know what they’re doing, but it’s not a game.”

With his team behind by such a large margin in the second half, Petite had the option of having a running clock, but he wanted his players to get as much experience as possible.

“I told them no on the running clock, because we needed to practice,” Petite said. “We just need to play.”

Leah Major, who did get a lot oplaying time last season and led the Lady Warriors in scoring in a state-tournament victory over Piedmont Academy, scored six of her team’s 10 points on Tuesday.

While Tuesday’s game was a struggle, Petite said he’s optimistic about the team’s long-term prospects.

“It’s a good group. It’s a good team. They enjoy being together,” Petite said. “We’ve had great practices, great attitudes. Everybody is excited to be at practice every day. They’re looking forward to it. They’re going hard, they cheer for each other, and I enjoy it every single day.”