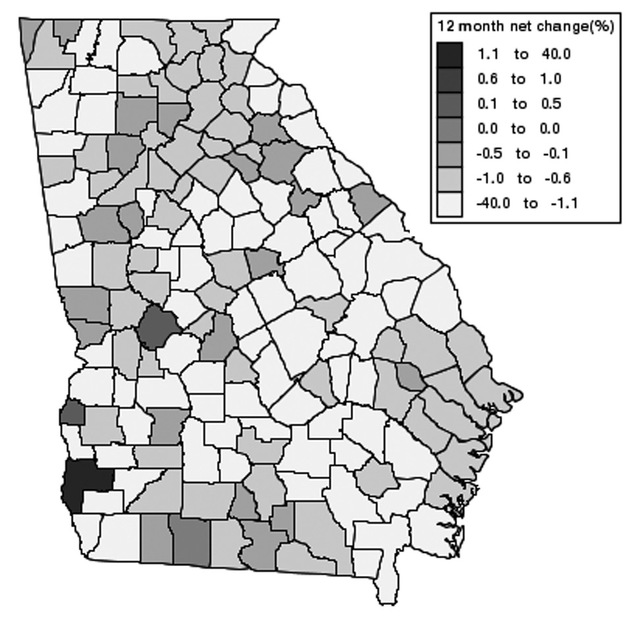 Monthly changes in unemployment rates by county in Georgia, not seasonally adjusted, between September 2014 and September 2015.

http://lagrangenews.com/wp-content/uploads/sites/37/2015/11/web1_UnemploymentChanges.jpgMonthly changes in unemployment rates by county in Georgia, not seasonally adjusted, between September 2014 and September 2015.

LaGRANGE — The national unemployment rate dipped by a tenth of a percent from September to October, standing at 5 percent as employers added 271,000 jobs, according to a Bureau of Labor Statistics report released Friday.

The jobless rate is the lowest since April 2008 and is exactly half of what it was at the peak of the Great Recession in October 2009.

The bureau has not yet released state and county level data for October, but in September, which is the most recent available data, Georgia’s seasonally adjusted unemployment rate hovered above the 5.1 percent national unemployment rate at 5.8 percent.

Troup County fared better than the state in September with an unemployment rate of 5.5 percent, down 1.6 percent from 7.1 percent a year ago.

Last month nationwide, employment in manufacturing and the mining industry was essentially flat, reflecting the strong dollar, weakness abroad and low oil prices. But business and professional services, retail, health care, leisure, as well as construction, all bulked up their payrolls.

The strong overall hiring suggests that the late-summer slowdown was a bump in the road rather than a downshift in growth as the economy heads into the important holiday shopping season.

Consumers have been driving economic growth in the U.S., thanks to steady job gains, low debts helped by rock-bottom interest rates and relatively resilient housing and stock markets. New cars have been flying off dealer lots. And economists are looking to consumers to keep fueling the economy, now in its seventh year of growth after the last downturn.

“We’ve had a major upward movement in consumer spending,” said Diane Swonk, chief economist at Mesirow Financial in Chicago. “Domestic demand is now offsetting turbulence from abroad that it didn’t in the past.”

Friday’s report will certainly boost the Fed’s confidence that the job market is continuing to progress — a precondition for the central bank to start lifting its benchmark short-term interest rate, which has been held near zero since late 2008.

Fed Chair Janet Yellen said Wednesday that the economy is “performing well” and that a rate hike could come next month, but policymakers are closely monitoring conditions affecting the outlook for inflation and the labor market. Fed officials have been more concerned recently about the very low inflation, but another month of good wage gains could reassure policymakers on this front as well.

The Fed will see one more major jobs report early next month before officials assemble Dec. 15-16 for their last scheduled monetary policy meeting of the year.