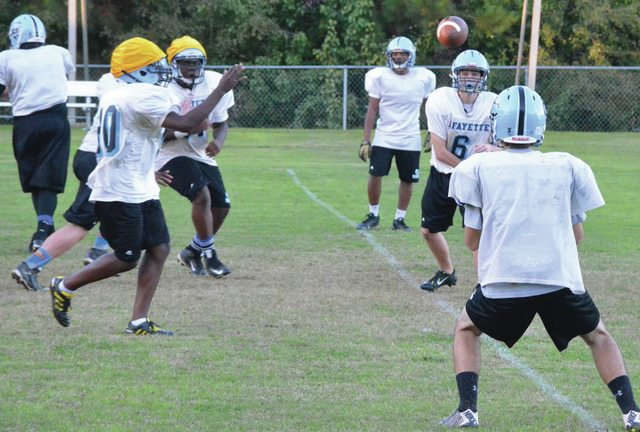 LAGRANGE – The season was at a crossroads.

The Lafayette Christian School Cougars headed into a new season with state-championship aspirations, but after dropping three consecutive games, there was no guarantee they’d even make it to the state playoffs.

After losing back-to-back games to Harvester Christian and Praise Christian, Lafayette Christian was at home on Sept. 25 for its region opener against Central-Christian.

In an overtime thriller, it was Lafayette Christian falling to Central Christian 58-56.

The Cougars play in a four-team region, and only two of those teams were going to qualify for the state playoffs.

That meant the Cougars couldn’t afford another stumble, or else they’d be sitting at home when the playoffs began.

Lafayette Christian evened its region record with a 34-22 victory over CrossPointe Christian, and that set up a winner-take-all game against Holy Ground on Oct. 23.

Once again it was a game that came down to the end, but this time it was Lafayette Christian finding a way to get it done.

Holy Ground scored a late touchdown to get within one, but Lafayette Christian made the stop on a two-point conversion attempt to preserve the win.

With the 35-34 victory, Lafayette Christian was playoff-bound.

The Cougars, who wrapped up the regular season with a win over Ballard Christian last week, will travel to Kennesaw today to face Shiloh Hills in the first round of the Georgia Independent Christian Athletic Association eight-man state playoffs.

It’s an eight-team tournament, so Lafayette Christian needs three victories to give the program its first state championship.

The Cougars reached the state semifinals the past two seasons, and they’re aiming higher this year.

“I think this year we’ll go farther,” senior linebacker Eli Shepherd said. “Everyone kind of caught onto the chemistry. Chemistry will take a team a long way. We’re just ready.”

Shepherd said after the heart-breaking loss to Central-Christian, “we all just got sick and tired of losing.”

“We knew we had the potential to be better than that,” Shepherd added. “We knew that in camp we worked harder than any team in our league we think. So we just had to come back, and bounce back, because we knew what we had, and we just had to bring it out on the field.”

Another one of the team’s seniors, running back Jemi Reed, said the way the team rebounded from the losing streak is “a real good testament to where the team’s heart is.”

Nate Shaw, the team’s head coach, actually felt things began to turn around in the loss to Central Christian.

Even though the Cougars lost that day, they showed they could compete and play step-for-step with an elite team.

“The third game we lost is where we actually responded,” Shaw said. “We played out of our minds. It was just one of those things.”

Before that, Shaw said “we weren’t playing well, and our chemistry was off, and we had to make some personnel shifts. And that actually made us better.”

Lafayette Christian snapped its losing streak with a 56-0 victory over Shiloh Hills, and those same two teams will meet again today.

Shiloh Hills won its region, which is why it will be hosting today’s game.

Lafayette Christian’s likely second-round opponent would be Praise Academy, and that would also be a rematch of a game from earlier this season.

If Lafayette Christian could get past Praise Academy, it would reach the state-championship game, which will be played on Nov. 27 at Colonial Hills Christian School.

“We’re very ready,” Shepherd said. “We just have to come with the intensity, play hard. Our mission is to win. If we just continue with that winning mentality, we’ll be very strong in the playoffs.”

Shepherd is part of a nine-man senior class that has been a part of a lot of special moments over the years.

Many of the seniors, including Shepherd, joined the team as eighth-graders, and a football program that is less than 10-years-old was still finding its way.

When the seniors were sophomores in 2013, the Cougars won their first playoff game, and they nearly won their semifinal game to reach the championship game.

A year ago, Lafayette Christian had the best record in school history and made it back to the final four.

Turner Hill is one of those seniors who has been with the program for five years, and he said the state of the program now compared to what it was in 2011 is “night and day.”

“It’s a complete 180,” Hill added. “It feels so much different, especially for us seniors knowing how it used to be.”

Four or five years ago, Hill and the other current seniors were the young guys, the up-and-comers who were looking to make their mark.

For Hill, his time as a player is already over.

After suffering a pair of concussions this season, Hill was done playing, but that doesn’t mean he isn’t a part of the team.

“I know I can’t get on the field, so I’m going to do my best to try to be a part of the team as much as I can, help out the guys, be here, and just be here to support the team any way I can,” Hill said. “It’s great to be able to be out here and help the guys.”

Reed, one of the team’s top players, is a relative newcomer to the program.

Reed joined the team as a junior, and he said his two years on the team have “been outstanding.”

“It’s a blessing to have a team full of brothers and everybody loves you, and brings you in like you’re one of them,” Reed said.

Shepherd got his first varsity playing time as an eighth-grader, and over the years he has developed into a terrific player.

In February, Shepherd will likely become the first Lafayette Christian player to sign a football scholarship.

“It’s been amazing,” Shepherd said of his time at Lafayette Christian. “I came here in middle school, eighth grade, and a lot of those guys transitioned over to varsity with me. It’s been fun being with them, playing my last year with them.”

The Cougars have everything working right now.

Reed has the ability to score everytime he touches the ball, whether it’s on offense, defense or special teams.

In the regular-season finale last week, Reed had four interceptions, two of which he returned for touchdowns, he had a punt return for a touchdown, and he also had a long scoring run.

In a big region win over CrossPointe, Reed had a 65-yard touchdown run, and he also returned an interception 83 yards for a score.

In the dramatic 35-34 win over Holy Ground that clinched a playoff spot, Reed had two touchdown runs.

Senior Sam Marshall also had a scoring run in that game, and Shepherd returned an interception for a touchdown.

Senior running back Antavious Sands has had a big season, and Shepherd has provided a formidable presence from his fullback position.

Eight-man football is more of an offensive game, but Lafayette Christian’s defense has made the plays when it has had to.

Throw in a dependable kicker in Morgan Channell, and the Cougars are primed and ready to chase a championship.