It was a special regular season for Cavaliers 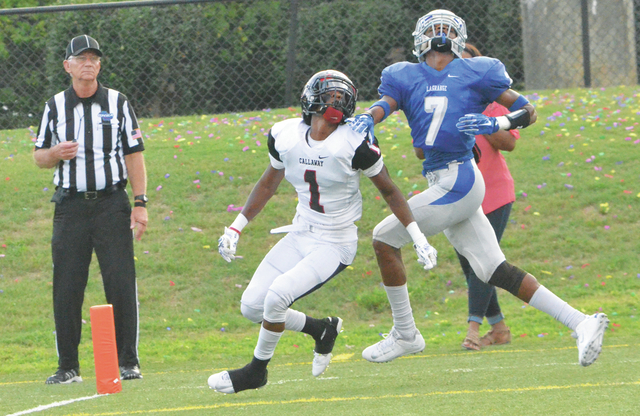 Callaway quarterback Dylan Johnson takes off on a long run during a win over Haralson County. Kevin Eckleberry | Daily News

http://lagrangenews.com/wp-content/uploads/sites/37/2015/11/web1_10-30-CHS27.jpgCallaway quarterback Dylan Johnson takes off on a long run during a win over Haralson County. Kevin Eckleberry | Daily News Dre Martin had a touchdown catch in a 42-24 victory over Troup. Kevin Eckleberry | Daily News

http://lagrangenews.com/wp-content/uploads/sites/37/2015/11/web1_9-26-martin.jpgDre Martin had a touchdown catch in a 42-24 victory over Troup. Kevin Eckleberry | Daily News Callaway’s Cedric Maynard had an 84-yard touchdown run late in the first half in a 33-17 win over Harris County. Kevin Eckleberry | Daily News

http://lagrangenews.com/wp-content/uploads/sites/37/2015/11/web1_callaway-maynard.jpgCallaway’s Cedric Maynard had an 84-yard touchdown run late in the first half in a 33-17 win over Harris County. Kevin Eckleberry | Daily News Callaway defensive back Tyrek Frazier gets in position to make a play during the season opener against LaGrange. Kevin Eckleberry | Daily News

http://lagrangenews.com/wp-content/uploads/sites/37/2015/11/web1_football5.jpgCallaway defensive back Tyrek Frazier gets in position to make a play during the season opener against LaGrange. Kevin Eckleberry | Daily News

HOGANSVILLE – The parallels are there.

In 2013, the Callaway Cavaliers enjoyed a 9-1 regular season that included a region championship.

That team then embarked on the best playoff run in school history that ended with a loss to Buford in the final four.

Flash forward two years, and the Cavaliers are basking in the success of a 9-1 regular season that culminated with a victory over Central-Carroll in the Region 5-AAA championship game.

Is history about to repeat itself?

The Cavaliers certainly hope so.

Today at 7:30 p.m. at Callaway Stadium, Callaway will begin what it hopes will be a deep playoff run with a home game against Hart County.

Hart County (7-3) headed into its final game of the regular season with a chance to win a region title, but it dropped to fourth place with the loss to Jefferson.

Callaway, meanwhile, has rolled to nine consecutive wins since a season-opening loss to LaGrange, and it outlasted Central-Carroll 21-14 last week to secure the region title.

“I’m really proud for these seniors, and these kids that work so hard,” Callaway head coach Pete Wiggins said. “You’re out there every day three hours, and you’re in the weight room lifting in the mornings. It’s just a special time. And I’m proud for these coaches. They spend so much time with the kids, away from their families. That football team, and our coaching staff, and our trainsers, we’re a big family out there. It’s a special time for all of those individuals involved, and I’m proud to be a part of that.”

Here’s a look at how the Cavaliers have got here:

Late in the first half, the Cavaliers were within two points, and then everything started going wrong.

The Grangers scored a touchdown in the closing moments of the second half to build a nine-point lead, and by the 4:48 mark of the third quarter, they were ahead 38-6.

The Cavaliers kept fighting, but they were unable to overcome a seven-minute stretch at the start of the second half where a nine-point deficit grew to 32.

There were some bright spots.

Senior running back Cedric Maynard kicked off what has been a phenomenal season by running for 167 yards on 14 carries, including a 56-yard touchdown run.

Braylon Sanders, in his first start at quarterback, ran for 93 yards and had two touchdowns.

Plenty went wrong as well, though.

The Cavaliers had more than 20 penalties, and they had some costly turnovers.

“I’m proud that our kids kept fighting, and obviously there are things that we can do better and mistakes that we made that we need to work on, and that’s what we’ll do,” Wiggins said.

Cedric Maynard following up his strong showing against LaGrange by running for 250 yards with two touchdowns against B.E.S.T. Academy.

Braylon Sanders also had two touchdown runs in that game, and Noah Stephens made a 30-yard field goal.

“We all work together,” Maynard said after that game. “We learn, and we push each other harder and harder just to get better. It’s a partnership. We’re working hard.”

The situation was desperate.

The home-standing Braves were leading 17-0 late in the first half, and they had the ball deep in Callaway territory with a great chance to push the lead to 24-0.

Callaway’s defense stepped up and made a huge play.

The Cavaliers then went 93 yards for the touchdown, with Sanders capping the drive with a 3-yard run.

Instead of trailing by 24 points, Callaway was within 10 points at the half.

In the fourth quarter, Callaway scored two touchdowns to surge ahead.

Callaway’s defense came up big in that game.

“I felt like our kids played really played hard,” Callaway defensive coordinator Dusty Hubbard said. “We challenged them to a man at halftime, and we got after them a little bit. In the second half, we came out and played with just a lot more effort than we had in the first half.”

It was the Cedric Maynard show again.

Late in the first half, the Cavaliers were trailing by three points when Maynard ripped off an 84-yard touchdown run to give his team a four-point lead at the half.

Callaway pulled away in the second half to get the home win.

Maynard ran for more than 250 yards that night, and he added to his blossoming scoring total with four touchdowns.

Maynard had nine runs of at least 10 yards in that game.

As for his touchdown run late in the first half, Maynard called it.

“I told them, we’re going to run and get a touchdown, and go the locker room (with the lead),” Maynard said.

Wide receiver Dre Martin got into the act with a touchdown catch from Sanders.

It was an impressive display of offensive football.

The Cavaliers scored touchdowns the first five times they had the ball, and they were driving for a possible sixth score when the first half ended.

Maynard had another monster game, this time running for 313 yards with two touchdowns, and Sanders threw scoring passes to Devin Brock, Dre Martin and Joe Brown.

In the second half, Tyrek Frazier capped the scoring for Callaway with a touchdown run.

Maynard finished the first half of the season with 1,115 yards on 95 carries.

“He’s a heck of a running back,” Troup head coach Tanner Glisson said of Maynard. “He’s hard to bring down. We got our hands on him and couldn’t tackle him. He’s physical, he’s big, he can run. He’s got enough speed when he gets on the edge it’s hard to catch him.”

The Cavaliers showed off their depth in their Region 5-AAA opener.

In the first half of the home game, Braylon Sanders suffered a knee injury and was lost for the game, and Cedric Maynard was unable to play in the second half because of an illness.

Tyrek Frazier stepped in and had three rushing touchdowns, and Dylan Johnson kept things running smoothly after moving to quarterback.

In the first half, Maynard ran for more than 100 yards, and he had two touchdown runs.

Frazier said everyone on the team is ready when their chance comes.

“You’ve got to be ready every time you step on the field,” Frazier said. “They gave me an opportunity. They said Cedric was hurt, so I just had to step up for the team, and we got the win.”

The Cavaliers made it six in a row with a stress-free road win.

Cedric Maynard was off and running again with four touchdown runs, and Dre Martin threw a touchdown pass to DQ Wilkerson.

Noah Stephens made four extra points, and he also had a 27-yard field goal.

Maynard had 317 yards on just 25 carries, and he also caught two passes for 54 yards.

Defensively, Callaway gave up almost nothing.

“Our defense really played hard and fast,” Wiggins said. “I felt like we really brought a physicality. The kids are playing faster each week, and they’re playing with more confidence. I was really proud of those guys.”

Pepperell came into the game riding high with a 5-2 record, but it had no chance.

The Dragons scored first to take a 7-0 lead, but the Cavaliers ripped off 35 consecutive points to win going away.

Cedric Maynard continued to dazzle with touchdown runs of 90, 60 and 10 yards.

At that point, Maynard had 18 touchdowns in eight games, and he moved closer to 2,000 yards.

“It’s crazy. It’s unreal to watch him,” quarterback Dylan Johnson said. “I watch him in practice each week. Everything he does in practice, he does in a game.”

It was also a big night for Dre Martin, who got the scoring started for Callaway with a 77-yard touchdown in the first quarter, and he added a 20-yard scoring catch from Johnson later in the game.

In a tune-up for the region-championship game against Central-Carroll, Callaway cruised to the home win.

Before either one of these teams played a game this season, there was little doubt they would end up playing for the region championship.

Callaway led 14-0 in the first half, but Central-Carroll rallied to tie it late in the third quarter.

In the fourth quarter, Callaway’s defense made a big stop on fourth down, giving the ball to the offense in a tie game.

Dre Martin then came through with an interception to clinch the victory.

Maynard capped his sensational regular season by running for 229 yards on 30 carries, and he had a 29-yard touchdown run.

There were so many heroes for the Cavaliers.

Maynard’s contribution was obviously huge, but the offensive line stood firm all night, Johnson played with poise and toughness, and the defense made some critical stops late in the game.

Tyrek Frazier had seven tackles from his defensive-back position, and Martin had five tackles with the game-clinching interception.

In a play that probably didn’t receive much notice but was still an important one, sophomore Lawrence Thompson came into the game early in the fourth quarter to punt.

Johnson is Callaway’s regular punter, but he had to leave the game with a cramp.

Thompson, a backup offensive lineman, came into the game and got off a nice punt that pinned Central back on its own 21-yard line.

It wasn’t exactly a game-changing play, but it was big at that time in a game where field position was so critical.

It was a night where everyone who stepped on to the field contributed something.

“Dylan went down with a cramp and had to sit out a play, so LT came in, and that was a big play in the game,” Wiggins said. “It was about a 40-yard punt under pressure.”