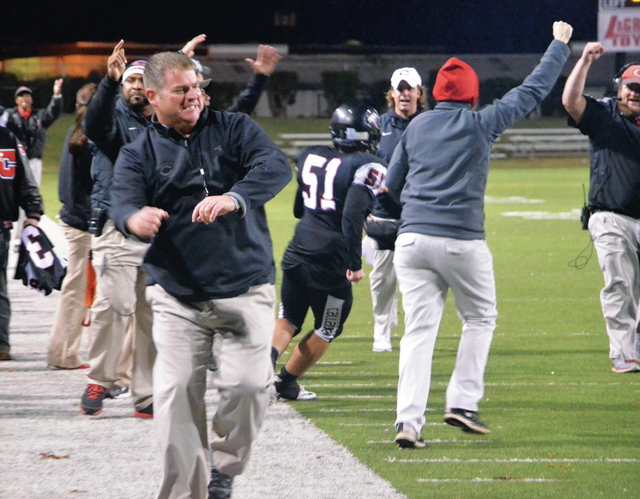 Dre Martin is congratulated by JT Wortham after making a defensive play in the first half. In the second half, Wortham returned a fumble for a touchdown. It was Martin who forced the fumble. Kevin Eckleberry | Daily News

http://lagrangenews.com/wp-content/uploads/sites/37/2015/11/web1_CHS30.jpgDre Martin is congratulated by JT Wortham after making a defensive play in the first half. In the second half, Wortham returned a fumble for a touchdown. It was Martin who forced the fumble. Kevin Eckleberry | Daily News Callaway’s Keegan Ramsey runs after making an interception in the first half. Kevin Eckleberry | Daily News

http://lagrangenews.com/wp-content/uploads/sites/37/2015/11/web1_CHS7.jpgCallaway’s Keegan Ramsey runs after making an interception in the first half. Kevin Eckleberry | Daily News Callaway’s Dylan Johnson bulls his way into the end zone for a touchdown run in the first half. Kevin Eckleberry | Daily News

http://lagrangenews.com/wp-content/uploads/sites/37/2015/11/web1_CHS32.jpgCallaway’s Dylan Johnson bulls his way into the end zone for a touchdown run in the first half. Kevin Eckleberry | Daily News When it comes to playoff football, that’s all that matters.

There was plenty that went wrong for the Callaway Cavaliers during Friday’s Class AAA state-playoff opener against Hart County.

There were turnovers, a whole bunch of penalties, a key injury, and there was a determined and talented opponent in Hart County.

When the clock struck zero, though, it was Callaway (10-1) advancing to the second round with a hard-earned 38-20 victory on a chilly evening at Callaway Stadium.

“We talk about it every day, that’s overcoming hard times, overcoming bad situations,” said Callaway head coach Pete Wiggins, whose team has won 10 straight games. “And this football team has been able to do it all year. From injuries, to whatever the circumstances are, I’m just so proud of them for keeping their composure, and finding a way to win.”

Hart County struck first with a touchdown just 30 seconds into the game, but Callaway took charge from there.

The Cavaliers had a 17-7 lead at the half, and after watching their advantage shrink to three in the third quarter, they scored three straight touchdowns to put it away.

Callaway’s defense did a terrific job containing a Hart County offense that has been putting up big numbers all season.

Callaway’s defense even produced a touchdown, with JT Wortham scoring in the second half after Dre Martin forced a fumble.

Offensively, Callaway got a bunch of people involved.

It was a complete performance by the Cavaliers, who are one of 16 teams still alive in the Class AAA playoffs.

“It feels good to win the first playoff game,” Boddie said. “If we keep playing like this, we’ve got a chance.”

Hart County started the game with a bang, with wide receiver Zach Maldonado taking a handoff and completing a 56-yard pass to Dre Sadler.

The rest of the first half belonged to the Cavaliers.

While the offense moved the ball with relative ease, Callaway’s defense put the clamps on the Bulldogs.

After the initial touchdown, Hart County’s only other first down in the first half came on a penalty.

“We had to bounce back, and the defense did,” said Wortham, a senior defensive lineman.

After Hart County’s touchdown, Callaway drove 80 yards to tie it.

The big play on the drive was a 61-yard completion from Johnson to Sanders.

Sanders, who began the season as Callaway’s quarterback, had missed most of the previous five games with an injury.

Johnson capped the drive with a 2-yard touchdown run, and Stephens made the extra point to tie it at 7-7.

After an interception by Keegan Ramsey, Callaway was in business at the Hart County 25-yard line, and that led to a 23-yard field goal by Stephens that made it a 10-7 game.

After a Hart County punt, the Cavaliers took over at midfield late in the first half, and they needed eight plays to score a touchdown and extend the lead.

Johnson had a key 14-yard completion to Martin on the drive, and Johnson also had a 13-yard run to put the ball on the Hart County 9-yard line.

On the next play, Maynard’s 9-yard touchdown run and the extra point gave Callaway a 17-7 lead with 10:54 left in the second quarter, and that was the score at the half.

The Cavaliers got off to a rough start in the second half with two consecutive turnovers.

After the second of those turnovers, a lost fumble, Hart County got a 14-yard touchdown pass from Robert Allen to Clark, and Callaway’s lead was down to 17-14 with 6:52 remaining in the third quarter.

On the ensuing kickoff, Frazier helped return momentum to Callaway with a return to the Hart County 26-yard line.

“He made a play, and he’s done that for us a lot of times,” Wiggins said of Frazier.

Sanders, who moved to quarterback late in the first half because of a hand injury to Johnson, completed a 12-yard pass to Martin, and two plays later, Boddie scored on a 13-yard run.

Hart County was stuffed on its next possession, and Martin had a long punt return to the Callaway 45-yard line.

On the seventh play of that drive, Frazier’s 12-yard touchdown run followed by the Stephens extra point gave Callaway a 31-14 lead early in the fourth quarter.

Any hope Hart County had of winning the game was all but snuffed out moments later.

Martin got to the quarterback and forced a fumble, and Wortham scooped the ball up and went about 25 yards for a touchdown, and Callaway led 38-14 with 10:58 left in the game.

“I knew I was going to score,” Wortham said. “I had a whole bunch of room.”

Hart County got a defensive score of its own when Marquise Allen returned a fumble for a touchdown, but Callaway was able to run out most of the clock when it got the ball back.

Callaway will host Westminster on Friday in a second-round game.