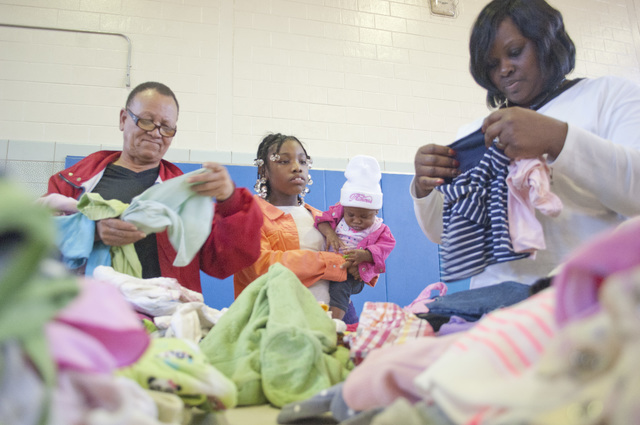 Kerin Brown, right, a volunteer with the Newnan-based outreach group Serving Our Community, helps Kiara Favors, center, pick out clothing for 6-month-old Breshia Favors, whom Kiara is holding, alongside Janice Williams during a clothing drive at the William J. Griggs Recreation Center.

http://lagrangenews.com/wp-content/uploads/sites/37/2015/11/web1_WEBClothingDrive1.jpgKerin Brown, right, a volunteer with the Newnan-based outreach group Serving Our Community, helps Kiara Favors, center, pick out clothing for 6-month-old Breshia Favors, whom Kiara is holding, alongside Janice Williams during a clothing drive at the William J. Griggs Recreation Center.

LaGRANGE — Dozens of families waited in line Saturday morning outside the William J. Griggs Recreation Center on Glenn Robertson Drive as they hoped for new clothes.

“It was like Black Friday when we opened the doors,” said Charmian Stephens, the organizer of the yearly clothing drive. “There was a line from the door to the road when we finally opened.”

Stephens and a group of volunteers prepared all year for the clothing drive, taking in donated clothing for boys, girls, adults and everyone in between.

“We had hundreds of donations,” said Stephens, who comes to the recreation center weekly to collect donations. “We had everything from kids clothing to scrubs and suits for church clothes.”

In a county where the U.S. Census recorded 19 percent of residents living below the poverty line in the 2014 American Community Survey, and the public school system reports more than half of students receive free or reduced-cost lunches, an opportunity for free winter clothes is something many people don’t pass up, Stephens said.

“We need to do more of this,” she said. “I think we need to raise more awareness and do more about poverty and homelessness in Troup County, because there’s a lot of it.”

“We mostly work with low-income neighborhoods,” said Sharon Ellison, a Serving Our Communities volunteer. “We do a lot of events like this, and we try to serve all kinds of people.”

Ellison said Serving Our Communities might be based in Newnan, but it aims to serve communities across west Georgia.

“We go to places all around,” she said. “Sometimes we go to Carrollton, places in Coweta County — we get around.”

Growing up in a community where she wasn’t as well-to-do as some of her counterparts, Ellison said making a difference in the lives of others motivates her to volunteer.

“We grew up in an environment that some might call less fortunate,” she said. “But we were rich in family and community. We’re just here to share that.”

Stephens said she plans to hold another clothing drive in December and is seeking donations and volunteers. She may be reached on her mobile phone at 706-302-6008.