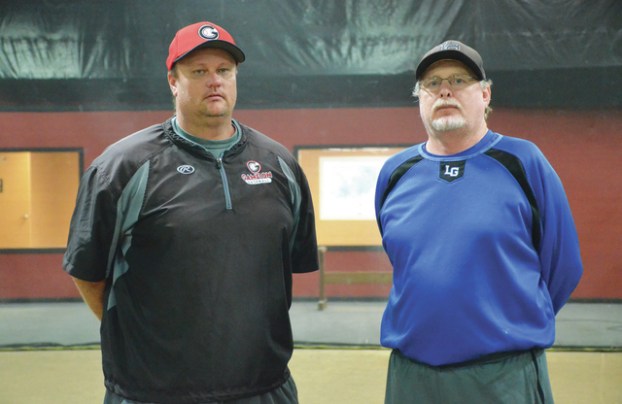 Shannon Snyder and Donnie Branch of Game On Training stand in the organization’s new facility, which is being renovated. Snyder is the Game On director, and Branch is the director of operations. Kevin Eckleberry | Daily News

http://lagrangenews.com/wp-content/uploads/sites/37/2015/11/web1_branch.jpgShannon Snyder and Donnie Branch of Game On Training stand in the organization’s new facility, which is being renovated. Snyder is the Game On director, and Branch is the director of operations. Kevin Eckleberry | Daily News

LAGRANGE – He’s still a part of the game.

For more than 20 years, Donnie Branch was the head baseball coach at LaGrange High, and he won more than 500 games and a state championship.

Branch isn’t coaching high-school baseball anymore, but he’s still heavily involved in the sport that has meant so much to him.

Branch is the director of operations for the LaGrange chapter of Game On Training.

For the past few months, a lot of Branch’s time has been spent trying to get things up and running at the local Game On facility at 100 Southern Drive, which used to be the home of the Northside Fun Park.

The 25,000 square-foot facility has been renovated and now has batting cages, indoor mounds, a fitness area and a conference room.

The facility is designed for baseball and softball teams to use.

“We’re 75, 80 percent done,” Branch said while offering a tour of the facility. “We still have little things that have to get done. The meat and potatoes is running.”

Branch was LaGrange’s head baseball coach from 1989 to 2012, and the his teams enjoyed tremendous success, including the 2004 team that captured a state championship.

Now retired from teaching, Branch was looking for a new challenge, and he found it with the Game On organization.

There are a handful of Game On facilities across the state, including the one in LaGrange, which is run by Shannon Snyder, who is a scout for the Atlanta Braves.

Other staff members include former Troup Tiger Luke Bailey, who has been a professional baseball player since 2009, as well as former Atlanta Braves’ catcher Johnny Estrada.

“Shannon is one of the best hitting guys I’ve ever seen,” Branch said. “And Luke is really good. He’s a really good hitting guy, a really good catching guy. He’s young, the kids like him. We’ve got a team out of West Point, a 12-year-old team, and Luke comes in, and they want Luke. And (LaGrange High graduate) Chad Grant helps, too.”

Branch is spending a lot of his time overseeing the renovation of the facility and recruiting new members, but when things settle down, he’ll be an active coach as well.

“I kind of feel like I know what it takes to get a kid to where he wants to get,” said Branch, a member of the Georgia Dugout Club Hall of Fame.

There will also be a number of camps coming up, including one offered by former major-league player Mike Cameron, a LaGrange High graduate.

Estrada, who played in the major leagues from 2001 until 2008 and had a three-year stint with the Braves, will also be offering a camp.

Bob Keller, the pitching coach at South Alabama, will also lead a camp, as will Jared Reeves, a minor-league baseball player in the Tigers’ organization.

Branch said anyone interested in the upcoming camps or in training at the facility can call (706) 302-5973, and he can also be reached by email at branchbaseball@gmail.com