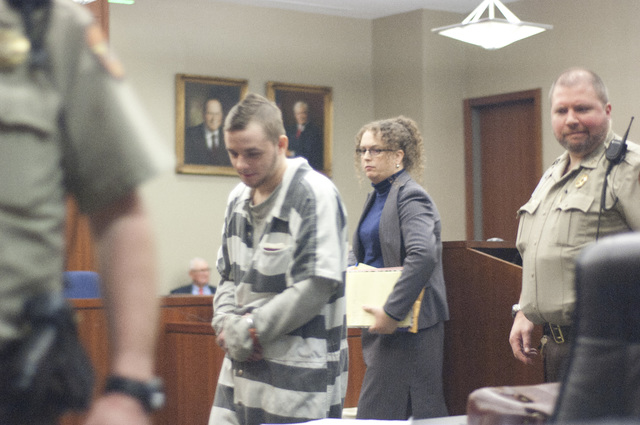 Chris Rice, 20, is led by deputies out of superior court Monday after pleading guilty to the March 20 murder of Jerry Folds.

http://lagrangenews.com/wp-content/uploads/sites/37/2015/11/web1_WEBChrisRice01.jpgChris Rice, 20, is led by deputies out of superior court Monday after pleading guilty to the March 20 murder of Jerry Folds.

LaGRANGE — A 20-year-old man who reportedly confessed to the brutal slaying of another man at a campsite off Hammett Road pleaded guilty to the crime Monday in Troup County Superior Court.

Christopher Rice of LaGrange was sentenced to life in prison with the possibility of parole for the March 20 malice murder of Jerry Lee Folds, 39, of Franklin.

Folds’ body was found near a cabin on the property of a local hunting club next to Yellow Jacket Creek, according to Troup County sheriff’s deputies. Investigators also located his car nearby in the 3100 block of Hammett Road.

Capt. Mike Caldwell, chief investigator with the Troup County Sheriff’s Office, stood before presiding Judge Allen Keeble and explained the nature of Fold’s death and how they caught Rice.

“On March 22, 2015, around 6 a.m. … investigators arrived on scene at Hammett Road and detected the lifeless body of Jerry Folds. Jerry Folds had sustained numerous stab wounds to the neck area. Through our investigation we had located a series of messages on Mr. Folds’ phone from Mr. Rice to meet on March 20, 2015.”

When Caldwell told Rice the sheriff’s department was investigating Folds’ death, Rice said, “I did it. He had it coming,” the chief investigator testified.

Deputies immediately arrested Rice and obtained a search warrant for his home. Caldwell said bloody clothes were found inside the residence.

Caldwell told the Daily News a witness spotted Rice covered in blood near the murder site and gave him a ride home. According to Caldwell, the witness told investigators when he asked Rice about his bloody clothing, the 20 year old said he cut himself on broken glass.

The good Samaritan reached out to the Troup County Sheriff’s Office after he read about the murder, saw Rice’s picture and realized it was the same man, Caldwell said.

Chief Assistant District Attorney Monique Kirby made sure Keeble, who is retired but sat on the bench Monday for Chief Judge A. Quillian Baldwin, knew the brutality of Folds’ murder.

“Your honor, to add to what Captain Caldwell just told you, Mr. Folds was stabbed 30 times,” she stated.

Kirby also told the court investigators believe Rice took money from Folds, but they could not prove if it was before or after the man had died. The prosecutor said Rice had little money, but went on a spending spree in the days after Folds’ death.

Trevor Moulder was Folds’ partner for seven years. He stood up and showed the court a large photograph of the man he called “the love of my life” and then broke down in tears as he remembered the day Caldwell told him Folds had been murdered.

“I knew something had happened to him … then Mike Caldwell came by … and told me that he had been stabbed all over his back … all over his body,” Moulder said as he burst into tears. “I just couldn’t believe it. Jerry was my first boyfriend and my first relationship. We were together for seven years of my life … and now he’s gone.”

Moulder said the last time he heard from Folds was March 20, when the 39 year old called to say he was bringing a friend home from work.

Moulder said he never heard from Folds again. He called and sent text messages to his partner, called his family, local hospitals, the LaGrange Police Department, Troup County Jail and finally made a missing person report at the Franklin Police Department, town where the couple both lived.

A few hours later he received the news Folds was dead.

Moulder said he was relieved by Rice’s arrest and had a few choice words for him in the courtroom.

“Why did you have to stab him,” Moulder asked him. “Were you high on something? It seems like it. … I don’t even know what to say to you, man.

“I can’t believe you’d even pretended that you are gay. You are not gay, buddy,” Moulder accused Rice. “You’re married to someone twice your age. You were just gay bashing, that’s what you were doing. … Yeah, you’re smiling alright … you don’t give a damn. … You destroyed everything. Burn in hell, buddy.”

Rice remained silent except to smile at the court and enter his guilty plea.