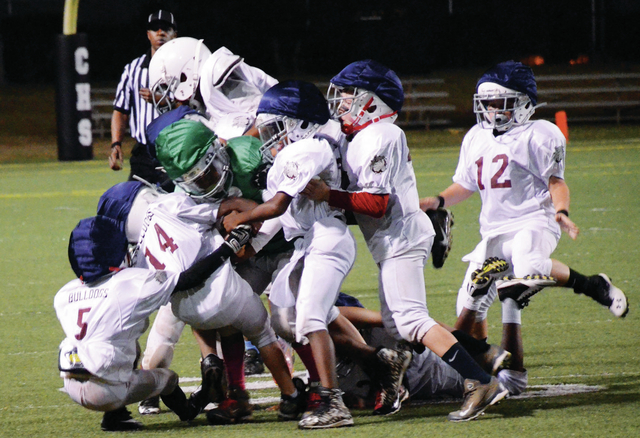 Magic Johnson, the quarterback for the Bulldogs, picks up some yards during Monday’s championship game against the Packers. Johnson had a touchdown pass, as well as a scoring run. The Bulldogs won 14-12. Kevin Eckleberry | Daily News

http://lagrangenews.com/wp-content/uploads/sites/37/2015/11/web1_football11.jpgMagic Johnson, the quarterback for the Bulldogs, picks up some yards during Monday’s championship game against the Packers. Johnson had a touchdown pass, as well as a scoring run. The Bulldogs won 14-12. Kevin Eckleberry | Daily News Marquarious Moss, a running back for the Packers, had two touchdown runs during Monday’s championship game. Kevin Eckleberry | Daily News

http://lagrangenews.com/wp-content/uploads/sites/37/2015/11/web1_football8.jpgMarquarious Moss, a running back for the Packers, had two touchdown runs during Monday’s championship game. Kevin Eckleberry | Daily News The Bulldogs make a gang tackle during the first half of Monday’s championship game. Kevin Eckleberry | Daily News

LAGRANGE – That was fun.

The Bulldogs and WOW! Packers got together at Callaway Stadium on Tuesday night in the Troup County Parks and Recreation Commission 9-10-year-old championship game, and they put on a show.

The Packers had a 6-0 lead at the half, but it was the Bulldogs rallying for a 14-12 victory in a game that featured plenty of outstanding performances on both sides.

A game’s worth of action was crammed into a thrilling stretch in the third quarter when the teams combined for three touchdowns in a little more than two minutes.

The Bulldogs scored the first two third-quarter touchdowns to take a 14-6 lead, and the Packers got a touchdown of their own to make it a 14-12 game, and that’s the way it ended.

The Bulldogs trailed 6-0 at the half, but they came out scored a couple of quick touchdowns in the third quarter to take a lead they wouldn’t relinquish.

It was a tough loss for the Packers, who came into the championship game with an 8-0 record.

Roderick Palmer, the head coach of the Packers, said he was proud of how much progress his team made during the season.

“They came a long way from the first practice,” Palmer said. “It’s a major difference. I’ve got three or four of them that haven’t played before.”

As successful as the season was, though, the players were despondent after losing a close and hard-fought game.

“(Losing) is part of it,” Palmer said. “They’ll remember this game. I’m proud of them.”

The Bulldogs were led by quarterback Magic Johnson, who threw a 50-yard touchdown pass to Steven Hill and had a 40-yard scoring run.

It was the second straight year Johnson helped lead the Bulldogs to the 9-10-year-old championship.

“Last year we won, and he was the MVP,” Poythress said. “This year he did it again. He just gets better and better each year. We’re very proud of Magic.”

For the Packers, it was Marquarioius Moss leading the way.

Moss had a 23-yard touchdown run in the first half, and a 46-yard scoring run in the third quarter.

After a scoreless first quarter, the Packers took over near midfield after recovering a fumble with 1:58 left in the first half.

After the Packers made it into Bulldogs’ territory, Moss had a 14-yard run, and he followed that up with his 23-yard scoring run, and it was a 6-0 game.

It didn’t take the Bulldogs long to pull even in the third quarter.

Kelvin Howell had a 13-yard run on first down, and on the next play, Johnson dropped back and spotted a wide-open Hill for a 50-yard touchdown.

Moments later, Jeffery Sims recovered a fumble, and the Bulldogs were in business again.

On the first play following the fumble, it was Johnson delivering a sensational scoring run.

Johnson broke a tackle in the backfield, and he got to the right sideline and out-raced the Packers’ defense for a 40-yard touchdown.

Blake Oldham attemped the kick after the touchdown, which in Troup County youth football is worth two points.

Oldham made the kick to give the Bulldogs a 14-6 lead with 3:21 left in the third quarter.

On the second play of the ensuing possession, Moss took off down the right sideline for a 46-yard touchdown run, and the Bulldogs’ lead was down to two.

The extra-point attempt was unsuccessful, so the Bulldogs maintained their two-point lead with 2:30 to play in the third quarter.

It was still a two-point game when the Packers got the ball at their own 43-yard line with 4:54 left in the game.

The Packers had the ball near midfield when Hill made an outstanding open-field tackle on Moss, a play that likely prevented a big gain and possibly a touchdown.

On the next play, the Packers fumbled, and the Bulldogs took over with 1:41 left in the game.

The Packers only had one timeout remaining at that point, so the Bulldogs were able to run out the clock, and the celebration was on.