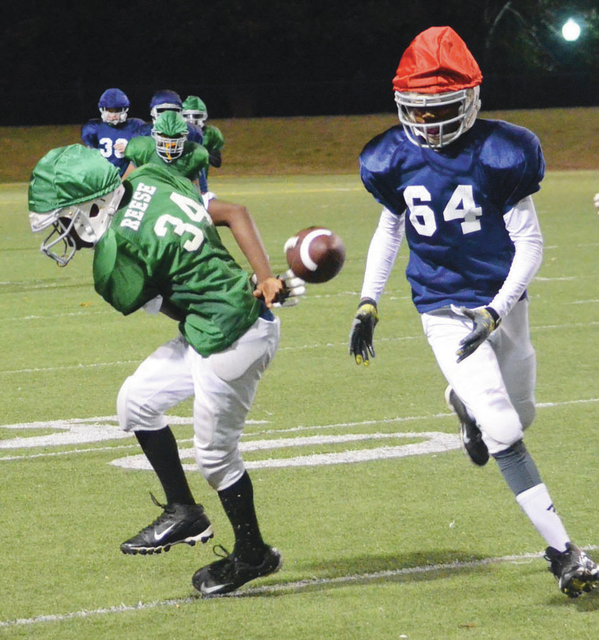 Jalin Shephard, a running back for the Hurricanes, looks for running room during Monday’s 11-12-year-old championship game. Shephard had a 7-yard touchdown run in the game. The Hurricanes beat the Jets 20-6. Kevin Eckleberry | Daily News

http://lagrangenews.com/wp-content/uploads/sites/37/2015/11/web1_football13.jpgJalin Shephard, a running back for the Hurricanes, looks for running room during Monday’s 11-12-year-old championship game. Shephard had a 7-yard touchdown run in the game. The Hurricanes beat the Jets 20-6. Kevin Eckleberry | Daily News Romain Jarno Huzzie of the Hurricanes, who was his team’s MVP, had two touchdown runs in the 20-6 victory. Kevin Eckleberry | Daily News

http://lagrangenews.com/wp-content/uploads/sites/37/2015/11/web1_football15-9.jpgRomain Jarno Huzzie of the Hurricanes, who was his team’s MVP, had two touchdown runs in the 20-6 victory. Kevin Eckleberry | Daily News Cleon Delaney, a wide receiver for the Hurricanes, attempts to come down with a catch while being defended by Des’Avier Reese. Kevin Eckleberry | Daily News

http://lagrangenews.com/wp-content/uploads/sites/37/2015/11/web1_football18.jpgCleon Delaney, a wide receiver for the Hurricanes, attempts to come down with a catch while being defended by Des’Avier Reese. Kevin Eckleberry | Daily News

LAGRANGE – It was close for a while.

The Hurricanes and Jets faced off for the Troup County Parks and Recreation Commission 11-12-year-old championship on Monday night at Callaway Stadium, and as the fourth quarter began, only six points separated the two teams.

The Hurricanes, who were looking to complete an unbeaten season, were clinging to a 6-0 lead as the third quarter ended.

In a span of less than five minutes in the fourth quarter, though, the Hurricanes scored a touchdown, recovered an onside kick, and scored another touchdown to extend the lead to 20-0, and the outcome was decided.

The Jets avoided the shutout when Daniel Martin returned a fumble for a touchdown in the closing moments, and that was a noteworthy accomplishment since those were the only points the Hurricanes allowed all season.

The Hurricanes finished off a perfect season with a 20-6 victory.

Under head coach Kinny Clark, the Hurricanes have now won five of the past six championships in the 11-12-year-old division.

Clark said each of those teams, this one included, has been a joy to coach.

“It’s been another great group,” Clark said. “I have not had a disappointing group since I’ve been doing this.”

The Jets had the ball first, and they did a nice job of taking a lot of time off the clock.

The Jets didn’t score on their opening possession, but they used up all six minutes of the first quarter before punting.

Once the Hurricanes got the ball, it didn’t take them long to score.

After an incomplete pass on first down, Romain Jarno Huzzie took a handoff and ripped off a 64-yard touchdown run, and the Hurricanes led 6-0 with 5:29 remaining in the half.

The Jets made it to the Hurricanes’ 22-yard line on their ensuing possession, but that drive ended with a failed fourth-down play.

Huzzie, showing off his defensive prowess, had a tackle in the backfield on third down to put the Jets in a fourth-and-long situation.

When the Hurricanes got the ball back, quarterback Hunter Kitchens completed a 13-yard pass to Cleon Delaney on fourth down, but time ran out, and it was a 6-0 game at the half.

The Hurricanes got the ball to start the third quarter, and they ended up giving the ball to the Jets after an unsuccessful fourth-down play.

Thaddeus Dixon of the Jets had a tackle in the backfield to help stop the Hurricanes.

The Jets got a 19-yard run from Zack Thompson to get the ball into Warriors’ territory, but they came away empty once again when they couldn’t convert on fourth down.

As the third quarter ended, the Hurricanes were ready to take control.

DreConus Jennings had what appeared to be a 26-yard touchdown run, but that play was negated by a penalty.

The Hurricanes ended up scoring anyway.

On the ensuing kickoff, Jalin Shephard recovered the onside kick to give the Hurricanes the ball at midfield.

Baakari Willoughby had an 18-yard run on first down, and Shephard followed with a 34-yard scoring run, but once again the touchdown was disallowed because of a penalty.

Right after the penalty, Jennings had a 29-yard run, and Shephard followed with a 7-yard touchdown run, and this time the score counted.

TyJal Hixson put an exclamation mark on the victory when he came through with an interception, and it looked like the final score was going to be 20-0.

With less than 20 seconds to play, though, Martin picked up a fumble and raced about 50 yards for the touchdown, and the Hurricanes had given up their only points of the season.

When the Hurricanes got the ball back, they ran one kneel-down play, and that was that.