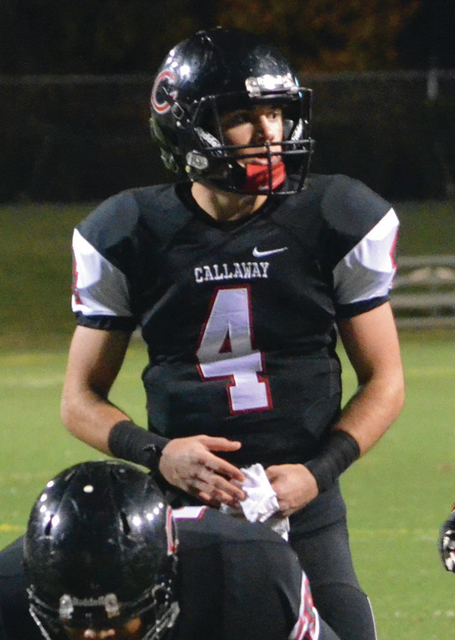 Dylan Johnson had been playing quarterback for Callaway until he suffered an injury in last week’s game against Hart County. Kevin Eckleberry | Daily News

http://lagrangenews.com/wp-content/uploads/sites/37/2015/11/web1_CHS51.jpgDylan Johnson had been playing quarterback for Callaway until he suffered an injury in last week’s game against Hart County. Kevin Eckleberry | Daily News

LAGRANGE – That was good timing.

After more than a month away while he recovered from a knee injury, Callaway’s Braylon Sanders returned to the field for last week’s state-playoff game against Hart County.

Before his injury, Sanders had been Callaway’s starting quarterback, and he’d taken nearly every snap at that position.

In his absence, Dylan Johnson performed admirably at quarterback and helped the offense keep putting up big numbers.

For the Hart County game, the 6-foor-2 Sanders started at wide receiver, and he made a long catch that set up Callaway’s first touchdown.

Sanders thought he might get some time in at quarterback against Hart County, but he ended up playing a lot more than he expected.

The plan changed in a big way when Johnson suffered a hand injury in the first half and was unable to return.

Fortunately for the Cavaliers, the man who began the season as the quarterback was ready to go.

Sanders was the quarterback for the final two possessions of the first half and all of the second half, and he helped the Cavaliers beat the Bulldogs 38-20 to reach the second round of the Class AAA state playoffs.

“I planned on playing a little bit (at quarterback), but I didn’t think I was going to finish the game like that,” Sanders said.

There were a few rough patches, which isn’t surprising considering he hadn’t played since the first half of the Cedartown game on on Oct. 8, but Sanders said he felt more comfortable as the game went along.

“This game really helped me a lot,” Sanders said. “I was very tight at the beginning, but I got my wind back, and I was ready to go.”

Sanders, who enjoyed a breakout sophomore season as a wide receiver, was moved to quarterback after the 2014 season ended.

He worked at that position all offseason with offensive coordinator Matt Napier, and when Callaway opened its season against LaGrange on Aug. 21, Sanders was the team’s quarterback.

He got better each game, and in his fifth start against Troup, he had three touchdown passes in the first half, all to different receivers.

Then in the Region 5-AAA opener against Cedartown, Sanders suffered a knee injury in the first half.

Fortunately for Sanders and the Cavaliers, the injury didn’t require surgery, and after a month of rest, he was able to practice last week, and he was ready to go for the Hart County game.

“It’s great to have him back,” Callaway head coach Pete Wiggins said. “He’s a big kid, and he’s a play-maker.”

On Callaway’s fourth offensive play, Johnson lofted the ball deep down the field, and Sanders went up and snatched the ball away from a defender for a 61-yard catch at the 3-yard line.

Johnson capped the drive with a 2-yard touchdown run, and the Cavaliers were off and running.

When Sanders moved to quarterback late in the second quarter, Callaway had a 17-7 lead.

The first four possessions with Sanders at quarterback resulted in zero points and two turnovers, and Hart County took advantage of a Callaway fumble to score a touchdown and make it a 17-14 game in the third quarter.

On the Cavaliers’ ensuing possession, Sanders found Dre Martin for a 12-yard completion.

Later on the drive, Brandon Boddie had a 13-yard touchdown run to push the lead to 24-14.

The Cavaliers ended up winning the game going away.

Sanders not only had the long catch early in the game, but he also got significant playing time at defensive back and had an interception in the third quarter.

Callaway has had a handful of significant injuries this season, and Sanders said everyone on the team is ready to go when called upon.

“We’ve got a lot of players that are ready to compete on this level,” Sanders said. “They get in, and they do what they’ve got to do.”

That includes Johnson, who was terrific at quarterback.

The Cavaliers were 5-0 in the games Johnson started at quarterback, and that included the 21-14 victory over Central-Carroll that wrapped up the region championship.

Johnson had two scoring runs in that game, including a 6-yard touchdown run in the closing minutes that provided the winning points.

Senior running back Cedric Maynard, who has 2,301 rushing yards this season and had a touchdown run against Hart County, said the team is in great shape with Johnson or Sanders at quarterback.

“(Losing Johnson is) a big impact for us,” Maynard said. “But it’s all right. We still have Braylon. They’re both good. It’s a good thing having both of them.”