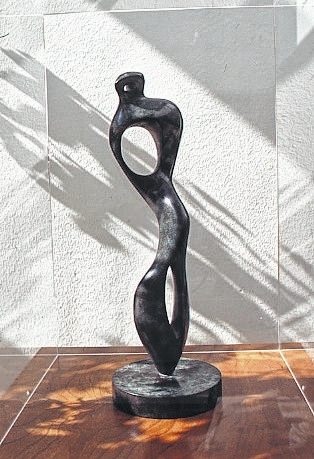 John Lawrence, Fuller Callaway professor of art and design at LaGrange College, shares a story about a bust of Lafayette by famed portrait sculptor Jean-Antoine Houdon that is the college’s permanent art collection.

http://lagrangenews.com/wp-content/uploads/sites/37/2015/11/web1_1118ArtLC01.jpgJohn Lawrence, Fuller Callaway professor of art and design at LaGrange College, shares a story about a bust of Lafayette by famed portrait sculptor Jean-Antoine Houdon that is the college’s permanent art collection. Bust of Lafayette by Jean-Antoine Houdon.

http://lagrangenews.com/wp-content/uploads/sites/37/2015/11/web1_1118ArtLC03.jpgBust of Lafayette by Jean-Antoine Houdon. LaGRANGE — The permanent collection at Lamar Dodd Art Center contains thousands of items, so choosing only five to spotlight can be a daunting task. But John Lawrence, Fuller Callaway professor of art and design, was up to the task.

He recently was asked to give a presentation on five of the most interesting pieces in the college’s art museum, so he chose those he felt had intriguing stories attached to them.

“Of course, the first name I think of as important in our collection is Lamar Dodd,” he said. “He grew up in LaGrange and attended LaGrange College as a teenager, when it was a women’s academy.”

Dodd went on to become one of the most recognized Southern artists of his generation, serving as head of the art department at the University of Georgia. That department now bears his name.

Lawrence said Dodd’s watercolor of sunflowers is one of his favorites because he was present when the artist painted it.

“I was invited by UGA to be an artist-in-residence in a summer program they offer in Cortona, Italy,” he said. “It happened to be the summer Dodd went to Cortona. We stayed in the same hotel and had breakfast together every morning.”

Lawrence said he’d see Dodd walking around the Italian hill town taking photos with a Polaroid camera. After lunch, the artist would go to his room. We all thought he was napping.”

The day before Dodd left Cortona, he invited Lawrence to his room.

“There was a stack of more than 100 watercolors he had painted that week – and this is one of them.”

Bust of Lafayette by Jean-Antoine Houdon

Jean-Antoine Houdon of France is known as the preeminent portrait sculptor of the Age of Enlightenment.

“The best portrait of George Washington in this country is a bust done by Houdon,” Lawrence said.

In the 1970s, former college president Dr. Waights G. Henry learned a bust of the Marquis of Lafayette by Houdon was for sale in Baltimore.

The college got a bargain because the piece had been corrupted and was in bad shape. Dr. Henry flew to Baltimore and bought it. Carrying the bust in his arms, Dr. Henry tried to board his flight to Atlanta but was stopped by an airline employee.

“She told him he couldn’t take it on the plane,” Lawrence said. “He told her he had to carry it because it was so fragile. She replied that the airline had crates he could use to ship it back.”

So Henry did the only thing he could do.

“He paid for another seat and brought it home.”

Lawrence took it to a conservator at the Metropolitan Museum of Art in New York for restoration. Driving back to LaGrange with the bust, Lawrence hit a snowstorm outside Charlottesville, Virginia.

“It was snowing like crazy – you couldn’t see the road or the landscape,” he said. “I decided to stop at the next house to get directions.”

As he pulled off the road, he noticed he’d stopped next to a historical marker. Peering through the blowing snow, he was startled by what he read.

“This house was where Lafayette lived when he was in Virginia. I knocked on the door and told the homeowner, ‘Guess who’s come back?’”

Henry also played a big role in the acquisition of one of Lawrence’s favorite works.

As the art department was moving into the new Lamar Dodd Art Center, the president asked Lawrence what kind of sculpture he’d like to see in the museum and gallery.

“I told him my favorite sculptor in art school was Henry Moore, but there was no way we could afford one of his pieces.”

Henry didn’t like to hear that something was impossible. He looked up Henry Moore and started a correspondence with him, explaining how much the college needed one of his works.

“One day, we got a package that contained two photos of his sculptures and a note from Moore,” Lawrence said. “He offered to sell one or both of them to us instead of going through a gallery. That meant we could afford to purchase a Henry Moore for the museum.”

“If you want a masterwork by the most influential artist of the 20th century, it would be a Pablo Picasso,” Lawrence said. “One of the many women Picasso painted and used as a muse was Francoise Gilot, a beautiful young woman and art student. She lived with Picasso and had two children with him.”

Ultimately Gilot left Picasso and became a well-known artist in her own right. Lawrence was able to meet her when she visited her godson in Hogansville.

“I have a copy of the book she wrote about living with, and leaving, Picasso. She signed it for me with a drawing.”

A few years ago, then-President Stuart Gulley was visiting an alumnus and discovered he owned a Picasso etching.

“Stuart persuaded him to donate it to LaGrange College, and he brought it back for our collection – a signed Picasso.”

Then Lawrence made an interesting discovery.

“On the back of the etching is written ‘From the estate of Paloma Picasso.’ The woman in the piece is Francoise Gilot and her two children.”

Sometimes, a piece in the collection will have a more poignant story.

“About five years ago, I got a call from a man in Decatur who told me his son, Lee Wilson, had a photograph in the most recent LaGrange National exhibition,” Lawrence said. “Turned out his son won a purchase award, and his work was hanging in our gallery.”

The father explained that Lee had disappeared during an attempt to sail solo across the Atlantic, and the family was looking for closure.

“He asked if he could come down to see the photograph,” Lawrence said. “I suggested we mount an exhibition of Lee’s work, and asked if we could borrow more of his photographs. He said of course.”

At the exhibition’s opening reception, Wilson announced that he was donating every photograph his son ever made to LaGrange College.

“On top of that, he set up a fund for an award to be given in his son’s name.”

Almost every piece of art in the museum has a story, Lawrence said.

“We are fortunate to have an art collection that is so varied to present to our students.”