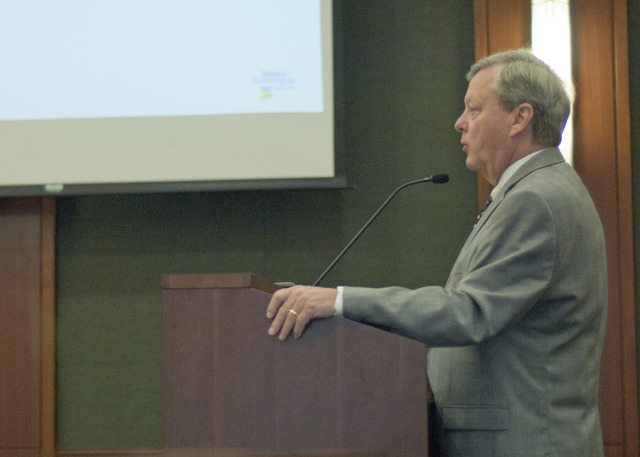 The presentation largely mirrored what Fulks has already said about the merger’s timeline and intricacies, with the addition of new numbers stacking the hospital against its competitors.

“They look at the discharge data to try to measure the quality and performance of hospitals across the country,” Fulks said. “What you’ll find about CareChex and West Georgia Health is that we’re rated in the top 100 hospitals in all of America, particularly in the categories of overall medical care and overall surgical care.”

The chief executive also reiterated a point he’s made before: “We’re calling it a partnership because it’s not an acquisition,” he said.

“The WellStar organization is about a $2 billion company and will address West Georgia Health’s needs for financial security in the highly uncertain times of what we’re facing in America,” he said. “We’re coming in as an equal partner.”

“This is not a rescue mission on the part of WellStar,” he added.

A facet of that partnership includes an exchange of board members between the bodies that govern both WGH locally and the Marietta-based WellStar board. Two appointees from WGH will sit on WellStar’s board to represent WGH’s interests and two WellStar board members will be added to WGH’s local board.

Both boards have signed off on the agreement and Fulks said the definitive agreement will be sent to the state Attorney General’s office later this week for final regulatory approval. The AG’s portion of the merger is expected to be completed by February, he said.

“Another aspect of this it the bond issue,” Fulks said, referring to a $46.6 million taxpayer-backed bond approved by commissioners in 2008 to partially finance construction of the new south tower.

“WellStar will assume responsibility for the bond, and they’ll assume that in writing,” he told commissioners. He went on to reassure commissioners that WGH has never missed a bond payment and has worked diligently to ensure there was also enough cash on hand to fulfill bond obligations.

“We’re very away of our commitment and we’ve managed it accordingly,” he said.

Commissioner Buck Davis of District 2 noted the bond issue was “a big deal when it came up” in 2008. At the time, two votes were held. The first time, the bond issue failed to garner enough votes from commissioners. It passed a second time later when then-Chairman Ricky Wolfe broke a tie in favor of the measure, according to meeting minutes.

No discontinuation of services is expected for at least five years, Fulks said. Any changes in services would also have to be approved by the local WGH board before WellStar could make any determinations, he added. He also sought to assure commissioners that local jobs would be safe, noting currently employees will not have to re-apply once the merger is complete and seniority, including credit for years served, would roll over under the new employer.

“I don’t want to paint WellStar as a silver bullet,” Fulks answered before he said determinations about new doctors would come as the need requires. He pointed out WGH has opened two new “primary care outposts,” as he called them, in Hogansville and West Point in the last five years.

Perotti also spoke to commissioners and showed them a slide presentation of WGH’s financial situation. The numbers show WGH is turning a corner after a few financially rough years. It’s bond rating is a mere percentage point or two away from an A rating and the hospital’s earnings before taxes, interest and amortization was strong in fiscal year 2015.

A public hearing will he held as part of the state attorney general’s review of the proposed merger. That date has not been set, but the hearing will be held in Troup County, Fulks has said.