It’s another challenge for Cavaliers 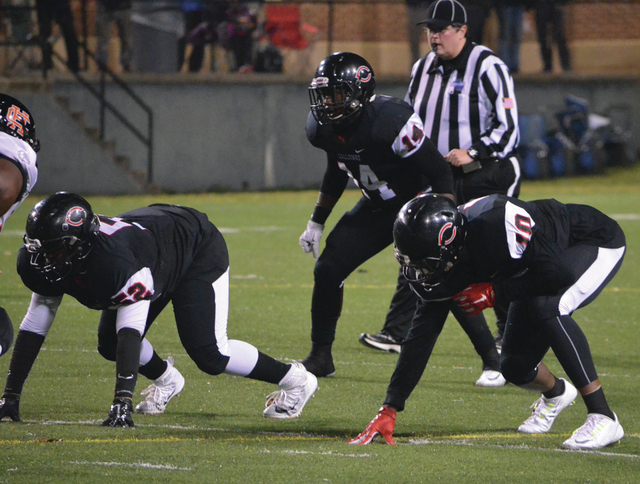 The Callaway Cavaliers will host Westminster in the second round of the Class AAA state playoffs on Friday. Kevin Eckleberry | Daily News

http://lagrangenews.com/wp-content/uploads/sites/37/2015/11/web1_CHS24.jpgThe Callaway Cavaliers will host Westminster in the second round of the Class AAA state playoffs on Friday. Kevin Eckleberry | Daily News HOGANSVILLE – It was a frustrating night.

The Callaway Cavaliers headed into their season opener hoping to beat the LaGrange Grangers for a second straight season, but it was a rough night.

A combination of costly turnovers, a whole bunch of penalities, and a determined and talented opponent was too much for the Cavaliers to overcome, and they lost 45-20.

The Cavaliers regrouped, got back to work, and looked to get their season on track the following week against B.E.S.T. Academy.

So how did the Cavaliers respond to that season-opening setback?

Considering they haven’t lost since, it looks like they handled things pretty well.

The Cavaliers beat B.E.S.T. Academy 30-14, and that was the start of a 10-game winning streak that continued with last week’s 38-20 win over Hart County in the first round of the Class AAA state playoffs.

Callaway will look to make it 11 in a row when it hosts Westminster on Friday at 7:30 p.m. in the second round of the state playoffs.

This will be the third time since 2009 these two programs have met in the playoffs.

Whoever wins the third meeting will be one of eight teams still standing in the Class AAA playoffs.

While Callaway (10-1) is rolling along with 10 wins in a row, Westminster (7-4) has won four straight, including an impressive 31-7 victory over Southeast Bulloch in its first-round playoff game last week.

Westminster is under the direction of head coach Gerry Rumberg, who has a 176-103 record in 24 seasons at the school.

A year ago, Westminster went 12-2 and reached the final four and played eventual state champion Calhoun tough before losing 19-8.

“Year in and year out, Westminster is always in the hunt for a title,” Callaway head coach Pete Wiggins said. “Coach Romberg does a great job with their kids. They play great defense, they’re fundamentally sound, their kicking game has always been strong. We’ve got to play mistake-free football, control the line of scrimmage, and that’s on both sides of the ball. And play fast.”

One thing Wiggins always stresses to his players is that things will go wrong during a game, and they can’t let those road blocks derail them.

Midway through the third quarter, the Cavaliers had turnovers on back-to-back possessions, and what was a 10-point lead at the half had shrunk to three.

Everything seemed to be going wrong for the Cavaliers, who had endured turnovers, key injuries, and some critical penalties that wiped out big plays, as well as a touchdown.

The Cavaliers are no strangers to adversity, though, and they scored 21 straight points to turn what was a hard-fought, close game into a blowout.

“This football team handles adversity as good as any group we’ve had,” Wiggins said. “We talk about it every day at practice, about overcoming whatever adversity they may have, and whatever situation there may be. I think they’ve done a great job throughout the season of handling the little things that win football games.”

It was no gimme game.

While Hart County came into the playoffs as a number four seed, it was an extremely dangerous team that came out one of the state’s best regions.

Offensively, senior Cedric Maynard ran for 144 yards with a touchdown, and he had a 63-yard scoring run called back because of a penalty.

Braylon Sanders, in his first game action since Oct. 8, had a long catch to set up Callaway’s first touchdown, and he ended up moving to quarterback late in the first half after an injury to Johnson.

Callaway’s offensive line, along with Boddie at fullback and Michael Freeman at tight end, did an admirable job against a formidable Hart County defensive line.

“Their defensvie line is one of the best we’ve seen,” Wiggins said. “They’ve got big kids that can move. When you’ve got that combination on the defensive line, that presents problems.”

Hart County scored a quick touchdown 30 seconds into the game, but it did very little offensively the rest of the way.

Senior linebacker Javoski Leverette had eight tackles, and Frazier had five tackles from his defensive back position.

JT Wortham had five tackles, including three tackles for loss with two sacks, and he returned a fumble for a touchdown.

Dre Martin had four tackles, including two for loss with a sack, and he had the forced fumble that led to Wortham’s touchdown.

Westminster came into the season ranked in the top five in the state, but it had an up-and-down regular season and finished 6-4.

The Wildcats are hot at the right time, though.

Three of Westminster’s losses came in the first five weeks of the season, and they were all close games.

Westminster has won five of its past six games and four in a row, and it has scored a combined 80 points the past two weeks.

One of Westminster’s top play-makers is 5-foot-6 running back Zay Malcome, who had 97 yards and two touchdowns in a 35-18 win over North Clayton in the final game of the regular season.

That performance made Malcolme the school’s all-time leading rusher with 3,248 yards.

Chase Williams has also been an effective running back for Westminster, and quarterback Rankin Woley is a threat primarily as a runner, but he can get it done in the passing game as well.

Westminster also has one of the state’s best kickers in Blake Gillikin, who has committed to Penn State.

That was noteworthy considering Southeast Bulloch came into that game averaging 285 yards on the ground.

Westminster’s run defense will be put to the test against this week against Maynard, who has run for at least 100 yards in every game this season.

The winner of Friday’s game will advance to the quarterfinals to face either Adairsville or Jackson next week.