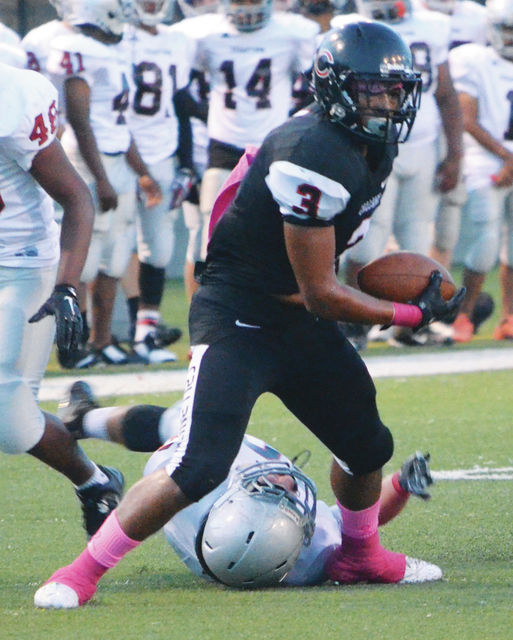 Callaway fullback Brandon Boddie takes a handoff from Dylan Johnson during a game against Cedartown this season. Boddie is a key to Callaway’s offensive success. Kevin Eckleberry | Daily News

http://lagrangenews.com/wp-content/uploads/sites/37/2015/11/web1_boddie4.jpgCallaway fullback Brandon Boddie takes a handoff from Dylan Johnson during a game against Cedartown this season. Boddie is a key to Callaway’s offensive success. Kevin Eckleberry | Daily News Tight end Michael Freeman occupies a critical role on Callaway’s offense, both as a pass-catcher and a blocker. Kevin Eckleberry | Daily News

http://lagrangenews.com/wp-content/uploads/sites/37/2015/11/web1_freeman2.jpgTight end Michael Freeman occupies a critical role on Callaway’s offense, both as a pass-catcher and a blocker. Kevin Eckleberry | Daily News

HOGANSVILLE – They call him hustle, and it’s a fitting nickname for a guy who does whatever it takes to help the team win.

Senior Brandon Boddie is a fullback for the Callaway Cavaliers, and while he does get his share of carries during a game, his primary job on the team is to be a blocker.

And it’s a job he does well.

The Cavaliers are a prolific offensive football team, and they do most of their damage on the ground.

Senior running back Cedric Maynard, who is one of the state’s top running backs with 2,301 yards and 23 touchdowns in 11 games, headlines Callaway’s offense, and on a lot of his big gainers this season Boddie has been the lead blocker.

Callaway head coach Pete Wiggins has immense appreciation for the work Boddie has done this season.

“You have to be a selfless person to have that role, and Brandon is a selfless person,” Wiggins said. “He’ll block each time he’s asked to do it. And he’ll get up and come back to the huddle and do it again He has a great attitude and a great work ethic.”

Boddie, whose older brother Quay Boddie was also a standout athlete at Callaway, said he’s happy to do whatever the coaches ask of him.

“My nickname on the team, they call me hustle,” Brandon Boddie said earlier this season. “I’ll do whatever I’ve got to do to help the team out and contribute.”

When Boddie does get to run the ball, he’s tough to bring down.

Boddie has a handful of touchdowns this season, and he’s a valuable asset to have in short-yardage situations.

In last week’s 38-20 victory over Hart County in the first round of the state playoffs, Boddie had a 13-yard touchdown run that gave Callaway a 24-14 lead.

That was a big moment in the game.

Hart County had just scored a touchdown to get within three, and Callaway came right back with a score of its own.

On second down, Boddie took a handoff from quarterback Braylon Sanders, and he bulldozed his way into the end zone for the score.

Boddie, who knows a thing or two about blocking, said the offensive linemen helped make that touchdown possible.

“I just thank God for letting me have a great offensive line,” Boddie said after the Hart County game. “Without them, we wouldn’t be able to run all those plays we do.”

Michael Freeman plays a different position, but his role is similar to Boddie’s.

Freeman is a junior tight end, and like Boddie he doesn’t get his hands on the ball very often, but he’s a huge part of the blocking scheme.

“Mike has developed so much throughout the season,” Wiggins said. “He’s moving his feet very well. He’s very physical at tight end.”

Wiggins said he considers Boddie and Freeman to be honorary offensive linemen.

“When we talk about the offensive line each week, even though Michael Freeman and Brandon Boddie are not offensive linemen, I always look to put their name out there, because they’re unselfish kids that are down in the trenches play after play and just getting the job done,” Wiggins said.