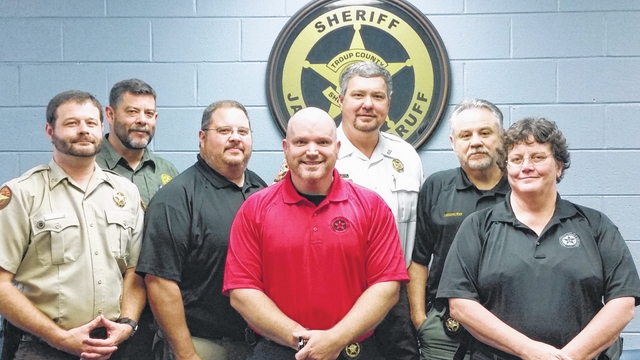 LaGRANGE — Things are getting a little hairy at the Troup County Sheriff’s Office on Sam Walker Drive.

It has been worse for some more than others as many of the deputies and employees loved to point out to each other in jest.

But, that is kind of the point for the 42 men — and some women — who are participating in TCSO’s first ever No Shave fundraiser.

Since the beginning of November, the deputies and employees have been letting their hair down, so to speak. For the men, that meant growing out beards and mustaches in exchange for a donation of $75.

Female employees at TCSO have also opened their pocketbooks and generously given to the fund.

Capt. Shane Frailey, head of TCSO’s patrol division, is the mastermind behind the fundraiser. He said it only took some minor persuasion and a few days of thought before Sheriff James Woodruff jumped on board with the idea.

The sheriff reportedly told him the only stipulation was employees must keep their facial hair neat and groomed at all times during the event.

According to Frailey, most law enforcement agencies do not allow their officers or staff to have moustaches, beards or goatees at any time, unless they are on special assignment.

Frailey said the event raised more than $3,200 and all the money will stay in house to help their comrades.

“When we get together we hold events like the car show or Toys for Tots and we raise money for the community,” he stated. “This time, I wanted to raise money for people in our department in their time of need.”

Frailey said the sheriff’s office has always had a benevolent fund for folks in the office who may lose a loved one or experience a tragedy.

“We bought a refrigerator for an 81-year-old woman,” he stated.

Smith said so far, they have received positive feedback about the fundraiser — and their faces — from their families and folks around the community.

After the first week, he posted a picture of some of the staff to the Troup County Sheriff’s Office Facebook page, which drew more than 350 likes and reached more than 11,000 people.

“People also see us out in public and they will say, ‘We like what you all are doing,’” he explained. “I went to Callaway Elementary School to do the Junior Deputy program and the students said, ‘Sgt. Smith, you have a beard!’ It’s funny what the kids notice.”

The deputies hope folks continue to like their new look. The No Shave fundraiser does not end until Jan. 31.

Capt. Frailey said he hopes to also do it again next year.