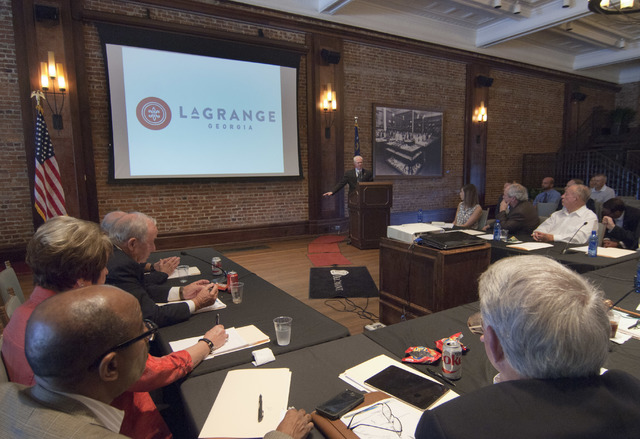 The city’s new logo for the ‘A City Inspired’ marketing campaign is used in a slide presentation to the Georgia Department of Transportation representatives Oct. 22 at the Del’Avant event center on Main Street.

http://lagrangenews.com/wp-content/uploads/sites/37/2015/11/web1_WEBCityLogo.jpgThe city’s new logo for the ‘A City Inspired’ marketing campaign is used in a slide presentation to the Georgia Department of Transportation representatives Oct. 22 at the Del’Avant event center on Main Street.

The campaign, with the tag line “A City Inspired,” will add to the existing “Smart Move” campaign in an effort to promote the city to both new residents and businesses, said Tom Hall, city manager. The new tag line, along with a new city logo, will be used in advertisements and websites. Depending on the market and intended advertising target, the city will use either “A City Inspired” or “Smart Move.”

“It depends on the placement,” Hall said. “If, for instance, we do an ad specifically to get a business here, we’ll use ‘Smart Move.’ If it’s a campaign to appeal to quality of life and a place to live, it’ll be ‘A City Inspired.’”

The new logo is a red emblem featuring duel fleur-de-lis symbols, a nod to the city’s architectural features. Tin ceilings in many of the city’s older buildings, including the Del’Avant event center, helped to inspire the new logo, according to a press release from the city. Adjacent to the logo is bold, modern typeface reading “LaGrange.”

The new branding will be incorporated into print and digital advertising, as well as on new websites for the city and the economic development department, according to a press release. Significant redesigns of city Web pages are expected to allow for easier navigation and user interface.

Hall said the campaign is much more than just a new logo.

“This is a whole marketing campaign,” he said. “It’s ad design, ad placement, social media and websites. In total, costs for the two years that we’ve been developing this has been about $78,000. That’s website design, ad development, the placement, the brand, the research. It’s not the cost to make the pretty picture.”

Mike Criddle, the city’s economic development director, said people will start to see the logo in many places.

“The new design will be used just like the old one was,” Criddle said. “You’ll see it on water towers, city trucks, on uniforms, lots of places.”

Don’t expect to see the city rushing to repaint all its water towers and trucks, though, said Hall.

Hall did note the city water tower on Tower Street near Hamilton Road, currently being repainted, will feature the newly designed logo.

Officials hope the new brand, developed in partnership with Atlas Advertising of Denver, will act as a catalyst to attract both businesses and residents.

“’A City Inspired’ tells the unique story of LaGrange’s lifestyle advantages while also conveying the city’s progressive pro-business environment,” according to a press release.

Mayor Jim Thornton said the new branding campaign will help to bring together many aspects of economic development.

“The city of LaGrange is excited to introduce ‘A City Inspired,’” Thornton said in a press release. “This contemporary brand unifies our city’s business and resident attraction efforts and conveys the unique advantages of LaGrange for both.”