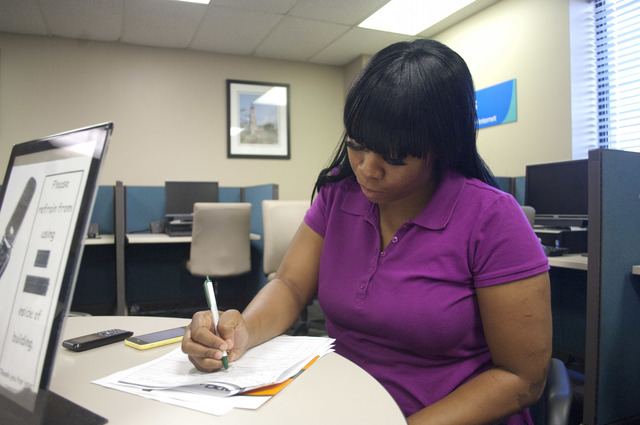 Sophia Truitt fills out a job application Thursday at the Georgia Department of Labor office on Longley Place. Truitt has been unable to find work since she moved to LaGrange in July to take care of her 6-year-old son after his father died, she said.

http://lagrangenews.com/wp-content/uploads/sites/37/2015/11/web1_WEBUnemployment.jpgSophia Truitt fills out a job application Thursday at the Georgia Department of Labor office on Longley Place. Truitt has been unable to find work since she moved to LaGrange in July to take care of her 6-year-old son after his father died, she said.

LaGRANGE — The statewide seasonally adjusted unemployment rate dropped one-tenth of a percent to 5.7 percent in October, down from 5.8 percent in September, according to Georgia Department of Labor statistics released Thursday.

The regional unemployment rate for west and central Georgia remained above the state average in October, hovering at about 6.1 percent, according to the Three Rivers Commission, a quasi-governmental consortium of 10 counties including Troup, Meriwether, Heard, Coweta and Carroll. That number is down from about 6.5 percent last month.

Antonio Bridges, a 32 year old from Warm Springs, is a face to those numbers. He’s been out of work since July when he worked on an assembly line in Newnan making foam mattresses for $8.50 an hour, he said.

“It seems like all of the jobs out there are just temp assignments,” he said as he waited for a job interview Thursday at the labor department’s office on Longley Place. “It’s hard to find full-time work, and it feels like it’s been like that for about three years.”

For months, he said he’s been visiting the labor department’s offices in Warm Springs and LaGrange to fill out applications.

“Looking for a job is a full-time job,” he said. “Going to the department of labor is helpful, they give you feedback and help … you feel like you’re going to get a job. I feel enthusiastic when I leave.”

No layoffs in Troup

Despite his attitude, Bridges may have some competition for the limited number of jobs in the area. First-time unemployment claims in Troup rose by 5.2 percent in October to 201 claims, versus September’s total of 191 claims, according to GDOL. In October 2014, there were 265 first-time claims.

The statewide number of initial unemployment insurance claims, a measure of new layoffs, rose by 2,701 or 10 percent, to 29,629 in October, according to Thursday’s statement by GDOL. Most of the rise in October was due to an increase in temporary claims filed in manufacturing, especially in textiles and transportation equipment, the statement said.

Growth seen in many sectors

John Sadosky, the city of LaGrange’s economic development manager, said local officials continue to work to bring new jobs to the area — while trying to keep the ones they’ve already attracted.

“Our department has been busy working on capturing new industrial projects that have come to us via the state’s department of economic development,” he wrote in an email to the Daily News. “However, we haven’t lost focus on the needs of our existing industries. I have been working closely with local industry leaders to help secure the talent and resources they need to succeed.”

Sadosky pointed to Fokker Aerotron, which specializes in aircraft maintenance and repair. That company opened a new office near the LaGrange-Callaway Airport in October and added 25 jobs to the region, investing an estimated $1.5 million in Troup County, according to Sadosky.

The total statewide number of jobs increased by 0.2 percent in October to about 4.3 million. Growth was seen in a variety of occupations.

Much of the job growth came in trade, transportation and warehousing, with gains also seen in professional and business services, state and local government, and manufacturing.

“Over the year, our employers created 97,100 jobs, which is a 2.3 percent growth rate and stronger than the 2 percent national job growth rate,” Mark Butler, state labor commissioner, said in a press release.

Not everyone is feeling the growth. Sophia Truitt, a single mother who moved to LaGrange from New York in July, said she hasn’t been able to find a job since her relocation. She moved to the area to take care of her 6-year-old son, whose father died unexpectedly, she said.

“I’ve filled out several applications,” she said as she added another to that list Thursday at the labor department’s LaGrange office. “When I moved here, I thought the cost of living would be better and the pace of life would move a little slower.”

With Christmas around the corner and a son who turns 7 in a few weeks, she’s worried the pace of job creation might be a little too slow.

“I guess we’ll just have to wait and see,” she said.